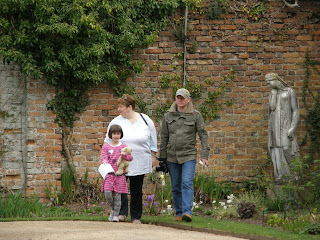 We all went to Tredegar House on Sunday. The National Trust have just taken it over on a 50 year lease from Newport Council. The trust will conserve and restore it to the tune of 4.5 million pounds. Newport Council bought it in the 1960s when St Josephs school moved to a purpose built glass box. A lot of residents in Newport said it was wrong of the council, that they shouldn't have spent money on a stately home that was going to cost a lot to keep standing. I was always sure they were so right. 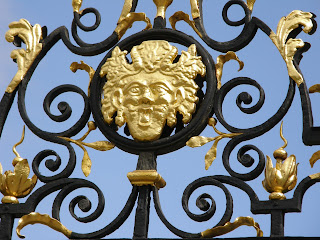 By leasing it to the National Trust they will put it in their handbook and immediately the potential visitors are trebled at least. They have changed the way you view the house and the garden and it is possible to see improvements even though it only opened on April 4th.
There was an Easter egg hunt, so Miss M took part in that - with a little help from Mummy and Daddy.

I managed to take some pictures of the gates that were restored back in the 1960s by my Dad.The satyr face is cast iron and there was only one of the six originals that was in good enough condition to keep so Dad had to get them recast. He had eight done just in case there were any mishaps. Fortunately all of them cast perfectly so after the restoration was completed he still had two faces. One of them he added to a fireback that he made for the house we used to live in. He put the date that he made it onto the fireback in such a way that it seemed to say 1698 when what it actually says is 1968.
The other face is at the top of my stairs. It has been there for thirty years and because of this it is no longer seen by the family. Miss M was totally surprised when her Grandpa pointed to the gates and told her that she could see the face at home.

When we got inside the house there were loads of changes to what we could see. It was amazing to see how a wedding feast looked in medieval times - some of the house goes back that far while most of the main part was "modernised" in the 1600s. Charles 1 is said to have stayed there when drumming up money for the war he was having with the Roundheads. 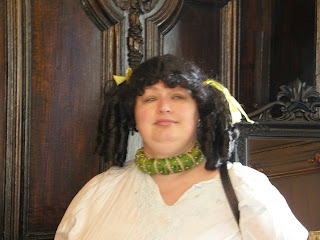 There was a huge trunk of dressing up clothes and a shadow theatre and tables with games on them and Miss M had to try everything. She was a little reluctant to dress up until Mummy joined in. and everything was going just great until we overheard the room steward say to someone else "There's dressing up, for the children". We went on to have a play with the games and then upstairs to see the different displays. We loved the gentleman in the 1920s room who told us about Evan Morgan who had a crocodile in his bathroom and snakes that slithered freely around the house. He also had a parrot that he would put down his trousers and let it poke it's head out of his flies. The nice man didn't tell us about this because there were several children in the room but I already knew it.

In the Gilt Room there is the most wonderful painted ceiling and on previous visits I had to crane my neck to try and see it and pretty soon you get a pain down your back and start to feel queasy. Now they have put a day bed in there just like William Morgan would have had when the room was first decorated. Now you can lie down in the name of historical research - Miss M, Harry Bear and Mummy were delighted to test it. They found it good.

This story has been brought to you through "Story-telling Sunday" invented by Sian Fromhighinthesky  Why not pop over there after you have read my story and see all the other stories.

In the mid eighties I had a games shop. I sold wargaming figures and Fantasy Roleplaying Games and figures. I also sold board games and the paints to do the figures but that's irrelevant here. I didn't make a lot of money, in fact I made very little money and was put out of business by shoplifters. That's not my story. Because I had to return a castle to the company that made it and it was too big for the post office to take we agreed to take it in our little van when we were going on a camping holiday and drop it off on the way. The company was in Boston Lincolnshire so we dropped off the castle and went on to Skegness to find a camping site.
Now you have to remember that we didn't have a tent so we had borrowed one off my cousin. Mr M had camped in this tent before, which was why we had borrowed it. We remembered when we were more than half way to Boston that we hadn't put the camping stove into the van when we packed it so we had no means of cooking anything - or boiling a kettle. Still it was an adventure.
The campsite in Skegness was flat, so that made things easy. There was no one there to check us in but there weren't many other campers, just half a dozen small caravans and one camper van. We chose a spot near the fence and dragged the tent out of the van.
This was where I discovered that while he might have camped in this tent before he had never put it up and couldn't remember how the poles fitted together or how they held up the canvas.
In fading light we spent over an hour fiddling with poles and crawling in and out of the tent fabric while the other one held it up. I had long hair then and even though it was in a plait it soon began to resemble a huge birdnest flopping around on my head. Eventually Mr M remembered how things went and we soon had the tent up and the guy ropes firmly pegged - to a smattering of applause from the other campers. Apparently we had provided some good entertainment and one or two were surprised that we didn't have a stand up row. What they didn't know was that we had lost our tempers and done the row bit when we had packed the van so there was no way we were going through that again, far too draining of energy!
We then went for something to eat and to ring Mr M's mother and tell her where we were - a tradition when we go on holiday "Hi Mam, guess where we are..." that sort of thing. We wandered along the promenade, looked at where the seas would be when the tide came in and then bought fish and chips and headed back to the tent.
As we walked down the slope to the campsite I said "ooh, look, donkeys!" and pointed to the overgrown field next to the campsite. Now, I don't know about you but if there are several animals in a field I have to count them, I just have to ok? "Seven donkeys, isn't that lovely?" Mr M glanced at them and, of course, because I had counted them, he had to count them too. "There's nine not seven" he said. I looked sharply at him and then turned to the donkeys and counted them again.
This time there were fifteen! "Great Scot! they must be coming out of the ground or something!" Another quick count, this time both of us were doing it, and there were twenty odd donkeys moving slowly through the belly high grass and weeds.
They were coming out of the ground. There was a tunnel that leads from somewhere by the beach and comes out in the field and that's where the donkeys were taken and their saddles and bridles taken off before they were let out into the field.
We ate our supper and as it was now quite dark we went to bed.
Sometime around 2am the world came to an end. Well, not really but I went from horizontal and asleep to sitting up terrified in one swift movement. Mr M was sitting beside me also wide awake and wondering what the unearthly noise was that we had heard. If my hair wasn't so long it would have stood on end.
And then it happened again
HEEEEEEEEEEEEEEEEEEEEEEEEEHAAAAAAAAWWWWWWWWWWW
You now have to try and imagine just how much like the trumpets of doom the sound of at least ten donkeys braying can be. Especially when they are lined up against the fence next to your tent.
Once my heart was back in my chest and not stuck in my throat I lay down and went right back to sleep again. Mr M said, in the morning, that my snoring soon soothed him and he fell asleep too.