Eldest Son and family came to see us. We like it when this happens. I get a few precious minutes with my daughter-in-law and a lot of hugs from the children. Both grandsons are adorable and full of fun and their baby sister has reached the stage where she is beginning to compete for attention. As most children are fearless at this age (nearly two) this means that Mummy spends a lot of time grabbing her before she falls off whatever she has climbed up.

We went to Darling Daughter's for our dinner. I could get used to this tradition. 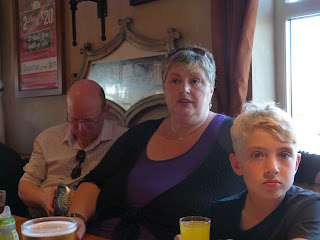 My Darling Daughter and Miss Boo treated me to a showing of White Christmas on the big screen. Our local theatre does showings of 'classic' films.
I was so excited and we had front row seats. I have never managed to get through this film without crying because it was my Dad's favourite. He was in WW2 so the bits with the soldiers resonated with him. Christmas 1944 saw him very close to where the Americans were fighting the Battle of the Bulge and then in February 1945 he was badly injured and shipped home to meet my mother.

Anyhoo, this film brings back memories of my Dad for me and my daughter so the chance to see it on the big screen was not to be missed.
We cried and sang and cried and laughed all the way through and the ending just got to me as usual so I was wiping my eyes as I sang/sobbed "We'll follow the Old Man, wherever he wants to go..." and thinking how marvellous that my Dad saw this in the cinema all those years ago.

They even made it snow on us at the end and as we filed out of the cinema studio there were warm mince pies. We have suggested that a showing of this film before Christmas should happen every year - make it a tradition, after all that's how traditions start. We would go - as long as I could walk I would go - I loved it and seeing the film on the big screen was so much better.

Merry Christmas to all *cue music* "I'm dreaming of a white Christmas, with every christmas card I write ..."
Posted by Ladkyis at 03:43 No comments:

Monday and Me - Home for the holidays 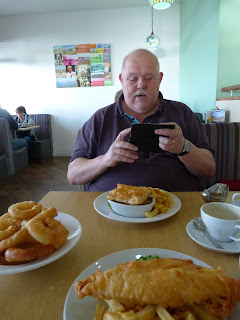 Mr M. Seen here photographing his lunch at Franco's last month, is officially off work until next year! This might not seem to be a big thing but, and here you have to take into account that we have been together for 37 years, I have always hated him going out to work.
From the moment we became a couple, and that was at my cousin Louisas wedding on Augusr 2nd 1980. I have always felt a physical wrench when he goes away from me. From the moment he goes out through the door I am waiting for him to come back.
He said recently that he has always felt the same and when I used to go to Manchester to dog sit for my daughter he would suffer from empty-armitis.

So when he arrived home from work on Friday and said he wasn't going back until January it was a real boost.
So here we are on Monday waiting until it is time to go to Ystrad Mynach so that Mr M can do his Hydrotherapy and then we can go to Morrisons and do the "ordinary" shop. The Christmas grocery shop, apparently, will be done later in the week. My eldest son has said that he and his family will be coming down from North Wales after Christmas so I can watch the children open their presents and get the chance to give my boy some of the family heirlooms to keep safe for when the children grow up. Nothing of great value just some things that belonged to my parents and grand parents that need to be shared out while I can still tell the stories.

Just a quick update to show off my new french doors. I cannot believe how much lighter it makes the room

Wednesday not Monday - Blame the lurgy

I was struck by ... something on Saturday. I was suddenly so cold I was shivering and shivering so badly I couldn't hold the crochet hook! I went to bed with my trusty bettermaker quilt and on Sunday I felt even worse.
I still managed to put the chicken in the oven so that Mr M had something to eat then I retired to my chair and spent the next two days there.

Not a lot happening here because of the lurgy although we have managed to get the craft room mostly into the Fornow room and we have a bed ready for Wicked Uncle Cliff when he arrives after Christmas. It took the efforts of three people to do this. I won't count myself in here because all I did was faff about. I even have a space to sit in there and sort through the magazines for the particular cross-stitch patterns that they were kept for. I think I might just cut them from the magazines and throw the excess in the recycling. OH,oh I could scan them and keep them on a memory stick! now that makes sense
Today I will be seeking out the single bed sheets and the duvet and pillows and getting the room ready for occupancy.
Posted by Ladkyis at 01:54 No comments:

Monday and me - Saying goodbye to Blue Cat

This is Blue Cat. He was rescued by my daughter and Son-in-Law eighteen years ago and has lived the life of Riley with them ever since. He adored FSiL and was devoted to DD and when Miss Boo arrived he regarded her as his personal adoration machine. 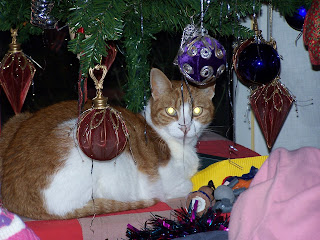 I was Grandma and when his real hoomans went on holiday I was a useful substitute. When they moved back home from Manchester he tolerated us and soon had us all running to his timetable.
He wasn't a cuddly cat and despite his orange and white colouring he never said Miaow like an ordinary cat, he spoke like a Siamese or Burmese and it was possible to have a long conversation with him. If he decided to sit on your lap you were indeed honoured 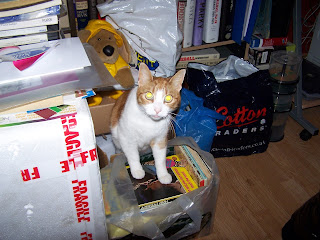 For the last few months he has begun to show his age and when I was tea lady for the builders last week I noticed that he was a lot stiffer and his back legs seemed to be weaker. He was still strident in his calls for food and even after I explained that I was there for the builders and not for cats he didn't give up.
Last night it was his time to go over the Rainbow Bridge and as you can imagine Miss Boo was distraught. DD was doing her very best to keep it together while she sorted out what to do so Boo came to us and was cwtched by Grandpa while Mummy got on with the job of taking him to the vet for his final time. Boo has never known life without him and said "I wasn't ready, I want him back to say goodbye, I wasn't ready"

This is the first time she has been old enough to suffer a loss and it is very hard. A huge part of me wanted to wash it all away, to make it all not have happened but that small voice of reason was there in the back of my head saying that this was the best way for her to experience grief and loss. She is safe in the heart of the family and can cry and talk as much as she likes without ever being told that she should stop. She will always have a little part of her ready for this to happen again and it will never be as raw because she has done it this time.

I shall miss the old Blue Boy. I hope there are squirrels and a safe window for him to sit behind while he swears at them
Posted by Ladkyis at 04:08 1 comment: