Monday and Me - Pink sky! No, really PINK SKY!

It's been a quiet week in Lake Wobegone - sorry, it's just that when I think about how to start my ramblings I always come to Garrison Keillor's opening lines on his radio show. It has been a fairly ordinary week here at Macey Towers. Youngest Son and Mr M are both recovering well from their battle with viruses and bacteria but next in line was Darling Daughter. She was sent home from work and after two days did the "I'm indispensable" routine and struggled back in only to be sent home again. This time she accepted that she really was ill and took to her bed with her Bettermaker Blanket. She has gone off to London for a conference or course today so she is on the mend too.

Monday and Me - First day out since Christmas

As I write Mr M is in bed, having gone to work and then come home sick!! I can't remember him ever doing this before so it is a bit scary . We went out for our first little ride since before Christmas. Misty Black Mountains, grey and soggy Herefordshire and the Jo's Place for lunch.

We needed bacon you see. Mr M bought a packet of sauce mix for Chicken and Bacon Pie and I thought I would try it. I have always done all my cooking from scratch so it is really strange to be using packets for sauces. I even use pre-packed pastry! If it's good enough for James Martin it's good enough for me.
We like Oakchurch bacon so we decided to go there and get some - and a few other things we were sure to desperately need. We went up via Abergavenny, Talgarth and the Wye Valley - not the narrow gorge between Monmouth and Chepstow, oh no, the proper wide open much more beautiful one around Hay on Wye. We love that route and never tire of seeing it in the different seasons, even when the sky has that If-It-Was-Two-Degrees-Colder-I-Would-Snow look about it. The cloud was so low it was getting it's bottom ripped by the tops of the mountains and the air had that slightly yellow flavour

We arrived at Oakchurch, which has become know as the Harrods of Herefordshire apparently. Paused to take a picture of their big turkey and then bought bacon, a quarter of lamb, some suet blocks for the birdies, a savoy cabbage for Sunday dinner and a couple of different potato peelers because our favourite one broke and nothing we have tried since has been as good
Then we went to Jo's PLace at Whitchurch, just outside Ross on Wye for lunch. We talk so much about so many subjects when we are in the car on our own. I just love this special time. For various reasons - mostly because we don't share a taste in TV programmes - we tend to sit in different rooms to watch TV. Another reason being that as soon as Mr M sits in his chair in the front room he goes to sleep so watching TV with him is like watching on my own but with added snoring. I can't sit at the table for too long without my ankles swelling so I have to elevate my legs - sitting in the car is different because he concentrates on driving and we talk. No chance of the phone ringing or the doorbell just us. Absolute heaven!

Monday and Me - All Gone 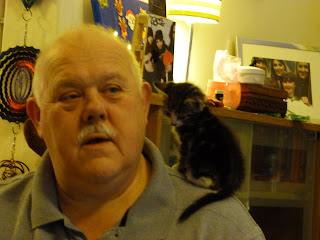 I think this has to be my favourite picture of the whole Christmas period. Sweet little Boots (she is polydactyl, hence the name) getting to know Mr M.

All the food is gone. The green and furry offerings to the Fridge Gods have been cleared out. The sausage rolls that have passed my stringent use by date have gone to work with Mr M to feed the birdies outside his office. Youngest son has gone back to work and all our visitors have left for home.

I do love to have a full house at this time of year and Wicked Uncle Cliff arriving in the dull days between Christmas and New Year has become a tradition that we really look forward to. Miss Boo likes to take him shopping and then not spend any of his money. He loves that she knows exactly what she wants and she knows that he would give her the moon if she asked but she doesn't ask - ever. She has already chosen what she would like and once her mind is set that's it.

He offers her all sorts of stuff ( the outcome of one of these encounters was the arrival of a five feet tall giraffe. Seeing the courier struggling with that was interesting) and sometimes she can be persuaded, but usually she is content with her original choice.

Now everyone is back to work, although Mr M has a cough and a runny nose. I was happy that he had gone to the Dr for the flu jab only to discover, last night, that he didn't go this time because he has decided that the constant pain in the muscle of his left arm is not arthritis as the Dr says but caused by the flu jab last year (which is when the pain started, apparently). So now I am worried. I am pretty sure it isn't flu because he can still get out of bed. If it was real flu he would not be able to get upright. I remember having real flu once and I was two weeks in bed before I could even stand.

We had a parcel with chocolates from a friend so I sent it all down to Miss Boo rather than be tempted to stuff my face. I haven't taken a single picture this year because I haven't felt well enough - in fact I haven't been outside the door since we walked down to my Daughter's house for Christmas dinner. I might not go out until spring

Happy New Year everyone
Posted by Ladkyis at 00:51 3 comments: