I have several stories about Legoland, the real, original Legoland in Billund, Denmark. We went there in 1988 to fulfil an ambition of Mr M's. My Eldest son was serving in the BAOR (British Army on the Rhine) and we went out to stay with him and his then wife for two weeks. I will tell the tale of the bus journey across six countries another time. This time we are going to Legoland with Nettie and Smudge.

It is several hundred miles from Verden to Billund Nettie and I were in the back of the ford Taunus with Mr M and Smudge in the front. We left at "stupid o' clock" (a technical army term) in the morning and arrived at Legoland around midday. We parked in the HUGE carpark and rushed to get into the park. As we walked towards the gate Mr M said "We'll do this logically, ok. We'll go around clockwise, that way we'll see everything and we won't miss a thing!" He was clutching the brochure that Nettie had obtained from the Toc H office on camp, and he and smudge had studied all the pictures and decided what they simply had to see at all costs.
I paid the nice Danish Lady at the gate and we all trooped through. First we bought a coffee each and a donut - we managed this in Danish and by pointing. The people who served us spoke perfect English. We were embarrassed. as soon as Mr M had finished his cup of tea he was itching to get started so we stood up and prepared to follow him. Now remember he had said clockwise so we don't miss anything, right?
Wrong.
He suddenly spotted a canal scene with moving trucks so he rushed of to the right to look and photograph and as he rushed he called over his shoulder "Ann, Ann! look, lorries moving!" as he arrived at the side of the exhibit he spotted the airport with moving planes so he rushed to the left, again calling over his shoulder Nettie, look, LOOK! the plane! the plane!" and was for a while known as Tattoo after the little character from Fantasy Island.
We zig-zagged our way around in his wake, much to the amusement of the other visitors. His obvious delight in all the exhibits and the number of rolls of film he used meant that he was totally unaware of the reaction he was getting.
Meanwhile Smudge was looking more and more downcast. Even a ride in Legotop (a tall column with a glass bottomed thing around it that people sit in and go up incredibly high to look at the view) where Nettie went green but didn't scream failed to make him smile. Eventually we asked him what was causing the bottom lip to stick out and he showed us the brochure. It had a big picture of the space shuttle on its launch rocket made of Lego. It was then that we realised that it had been removed because it was when the first shuttle disaster had happened. Smudge was not happy and as we headed for Legoredo he muttered "All the way to Legoland and no bl**dy rocket!"

Next month I will tell you about The carkeys getting locked in the boot and the rescue Viking. This story has been brought to you by Storytelling Sunday invented by Sian at High in the Sky take a look at all the other stories.
Posted by Ladkyis at 17:51 14 comments:

I know my place 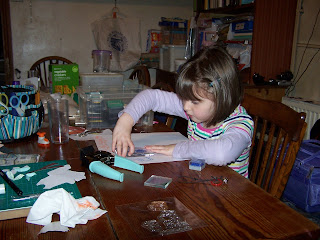 I just had to share this with you. I know I could wait until Sunday and share it as a Story-telling Sunday story but I just want you to laugh as much as I did when it happened.
Miss M and I were sitting at the table, crafting. We do quite a bit of that and when she is busy she talks. She can talk for Britain, gold medal standard but usually when we are crafting she asks the questions a girl can only ask her Grandma because she knows that I will never tell Mummy and will never lie to her.
So there we are, both of us busy and somehow the subject of age came up.
"You told me I'm a little old lady" said I.
"no Grandma, you're nearly old" she replied, sticking down a few petals on her flowers. There was quite a long pause as she thought about this and then she said
"When Mummy is as old as you, you'll be very old, Grandma" She continued to pick up the petals and stick them onto her scrapbook page. She pressed the last one firmly into place, looked up, threw her arms out and said
"And the dolls house will be MINE!"
Posted by Ladkyis at 13:06 5 comments: