Naked Cyclists in the 'Diff

This is my daughter's story but she rarely has time to breathe these days let alone sit at a computer.

She went to Cardiff (The Diff, as it seems to be called here in The Port) on Saturday with Miss Boo, to buy Bridesmaid shoes. Boo is to be a bridesmaid for her Uncle Mark and it is such an exciting thing for her... but I digress.
They had toiled around the shoe shops and decided to stop for refreshment. They found somewhere with outside seating and settled down to watch the people as they drank their drinks and ate their cakes.

There was a strange noise from somewhere along the street so Boo Stood up on her chair to see what it was. I don't know the collective noun for cyclists but I am assured there were a lot.
Boo shrieked "Mummy! they've got no clothes!"
and they hadn't.

A huge bunch of naked cyclists pedalling like mad whisked through the centre of Cardiff and off to who knows where. Such excitement.

As everyone settled back down in their seats the man behind my daughter muttered to his table companion "I am so glad I didn't have the hotdog!"

My daughter said it was a very close thing but she didn't spit her drink across the table or snort it down her nose. Such admirable control. I am proud
Posted by Ladkyis at 01:58 10 comments:

The Man in the Yellow Shirt

Yesterday we went out with Admiral Lord Bluefunnel and his Lady wife. You can read about that expedition here
While we were sitting enjoying the sun outside Wells Cathedral - we maintained our record of going to unusual places and finding them shut as we couldn't go into the Cathedral because they were installing the Bishop of Bath and Wells.
Now, I'll digress here for a second because that phrase always conjures up an image of a couple of men in High Viz jackets with the Bishop on a sack truck, just like the men who installed my new stove.... It's the way I think, OK? 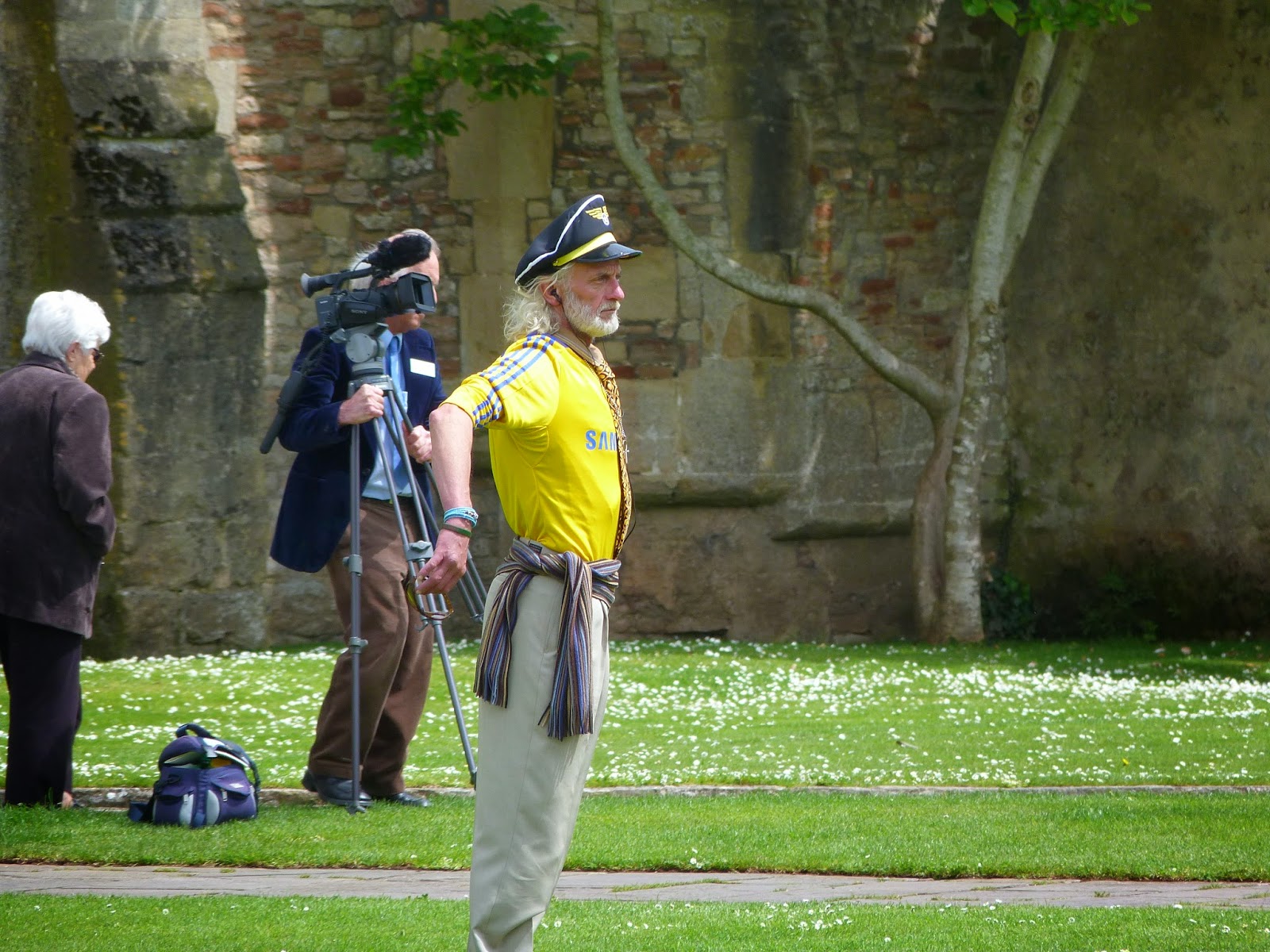 Where was I? oh yes, sitting in the sun outside the Cathedral hoping quietly to myself that my cuz, who was doing the driving, would want to go straight home because my knees were hurting from my fall and my left shoulder had begun to ache and I didn't remember hurting that, when Mr M said "The man in the yellow shirt". I looked, I grinned, I pointed my camera, zoomed and clicked happily over the next five minutes or so.

I just love that he could be there on the Cathedral Green where just a few minutes previously we had seen the beginnings of a ceremony and no one - and I mean no one bothered this man at all. 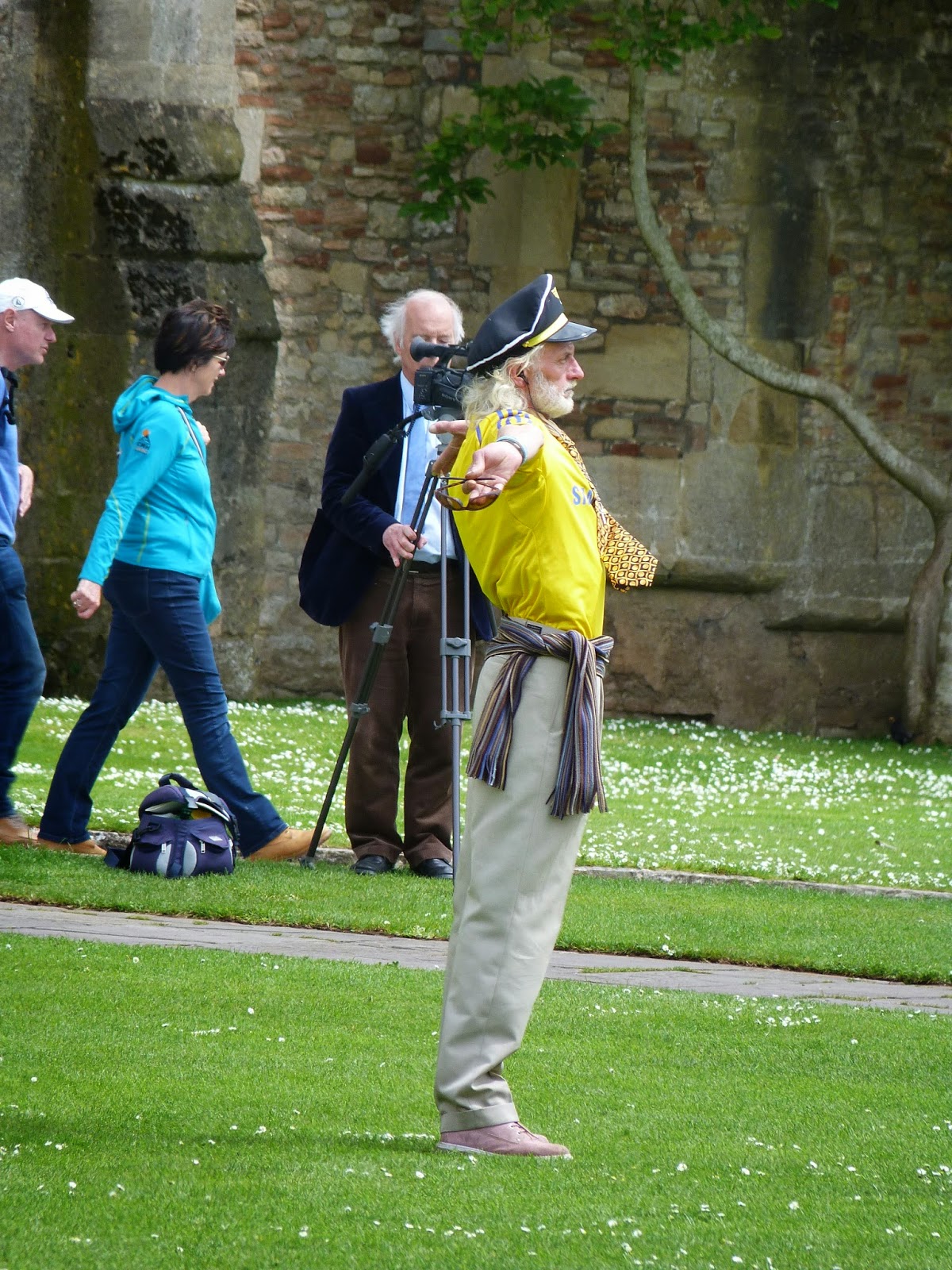 He was almost continuously talking to someone that we couldn't see. By the way he shook hands with the invisible person it was obviously someone important, I suspect it was Royalty by the way he did some things.

In spite of the importance of the occasion he was allowed to continue. To me this says that he must be well known to the cathedral staff and probably is well known throughout Wells. I just think it is so typically British that he wasn't tidied away, he was able to contribute to the events of the day.

Eventually he picked up his jacket and his umbrella and after symbolically firing one round from his umbrella he symbolically broke it across his knee then bowed to the invisible person and strolled off into the afternoon sunshine, mission accomplished 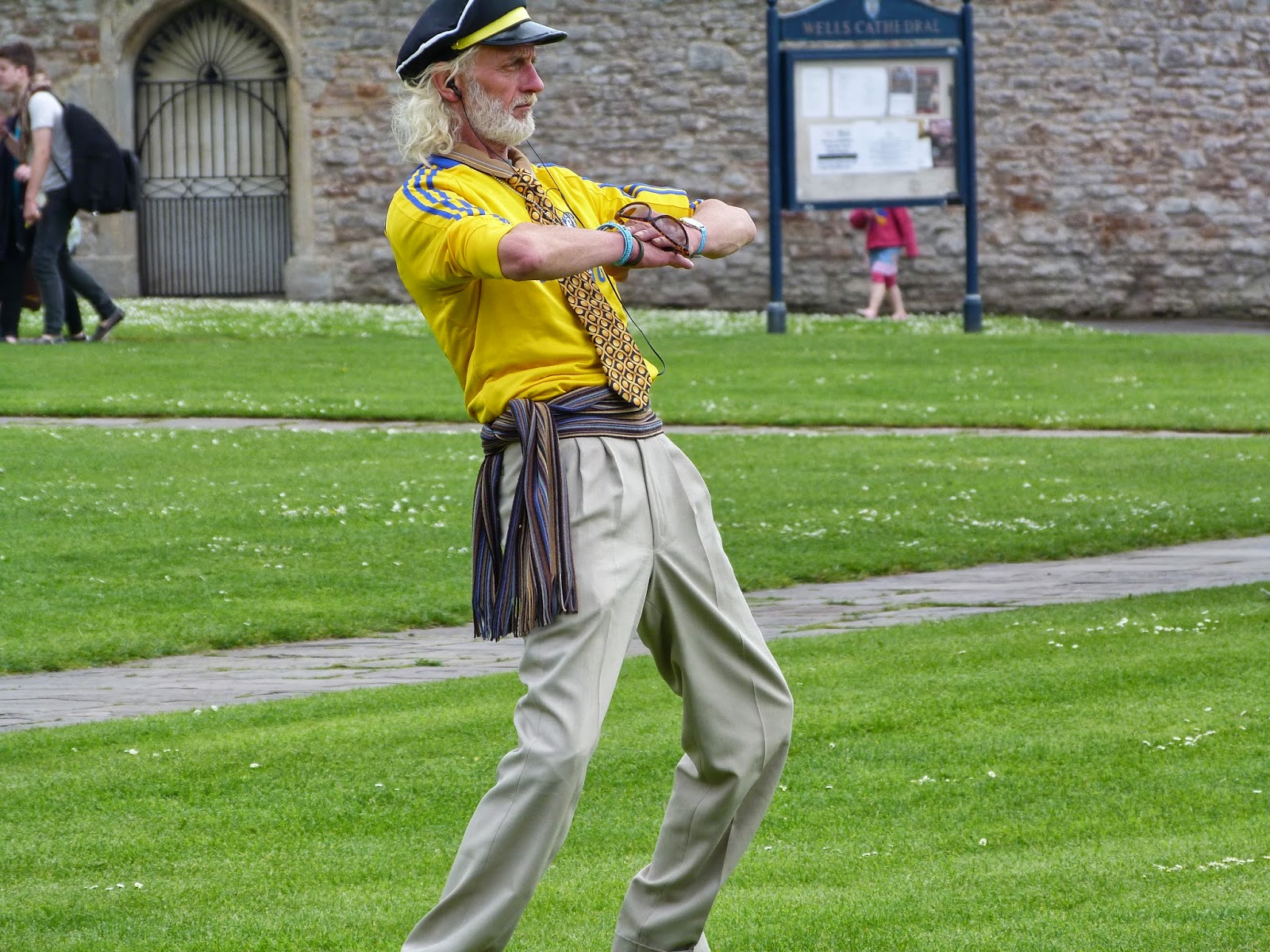 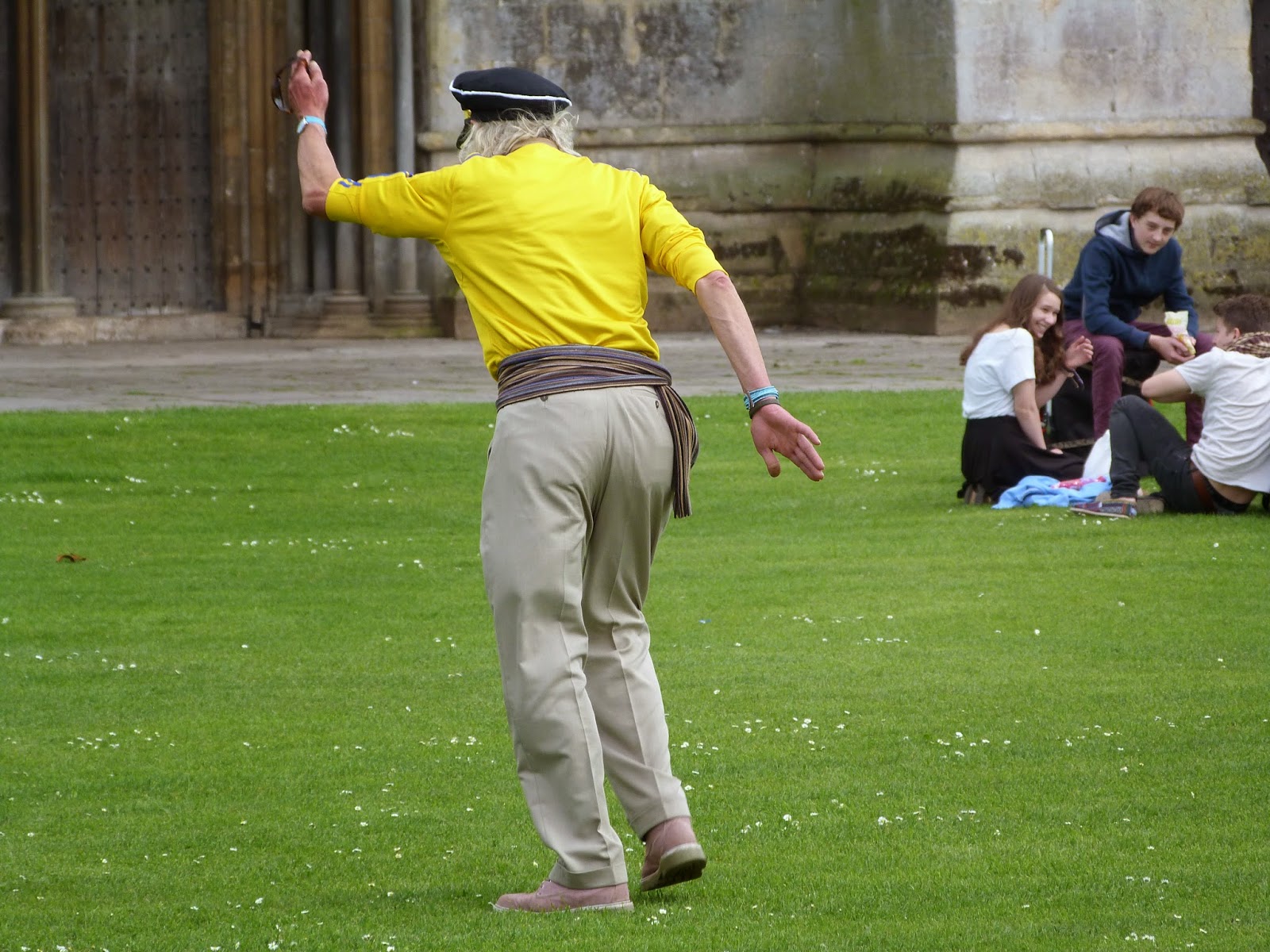 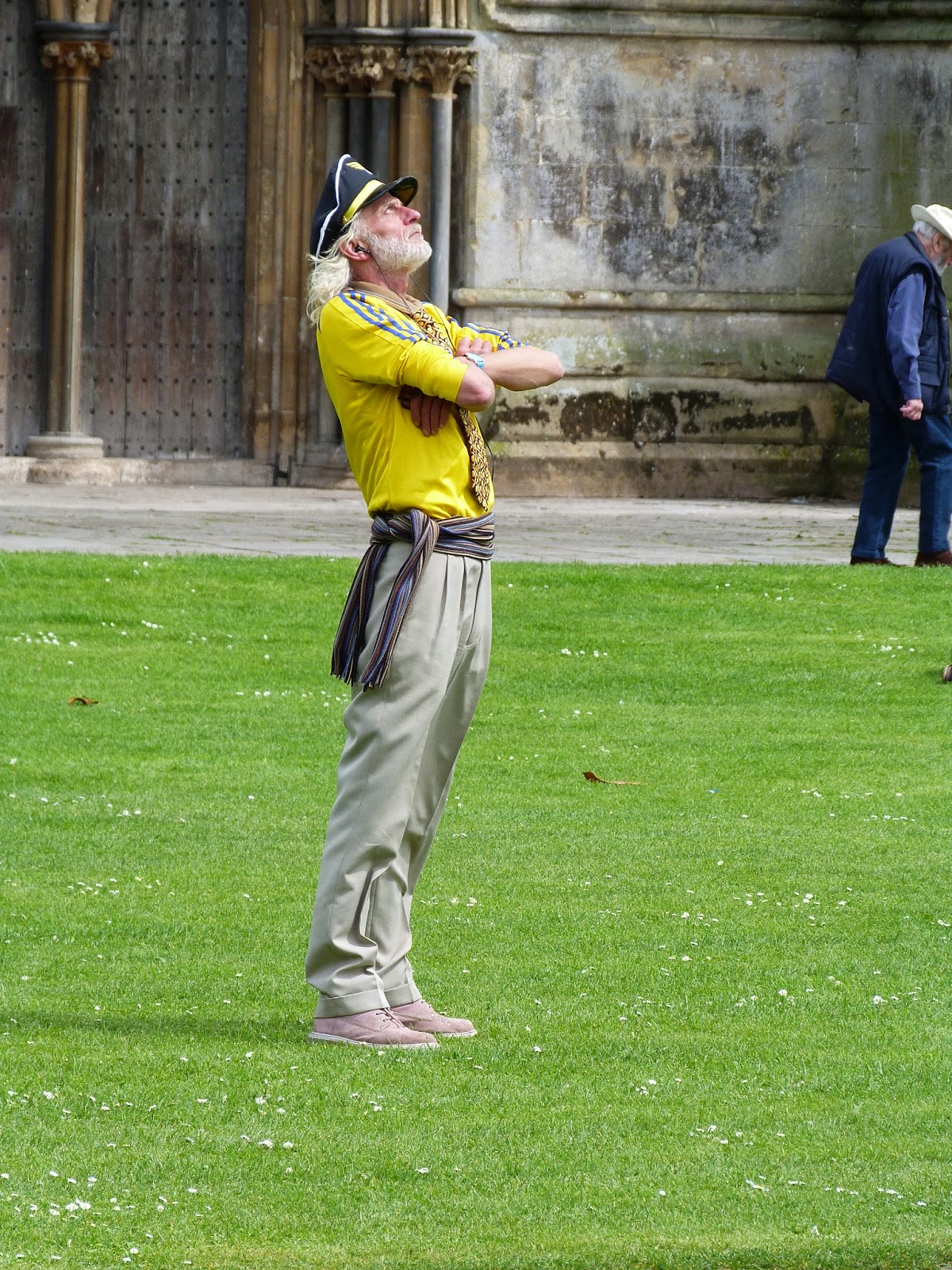