My youngest son got married yesterday -

I am blogging this now because Mr M said, and I quote - "You should get rambling on there so that I will know what I've been doing." so for the benefit of Mr M
My youngest son got married yesterday to a beautiful woman with a keen sense of humour and a wicked giggle. I took loads of pictures and at one stage I was in charge of two cameras! My own precious Lumix, with the Leica lens (apparently I have to say that every time I mention the camera) and my youngest son's Nikon DSLR with all sorts of whistles and bells. I put it on auto and pointed it.
I have never been to a bi-lingual wedding before and the Registrar rose to the occasion and ensured that the translators had enough time to make sure everyone understood what was happening 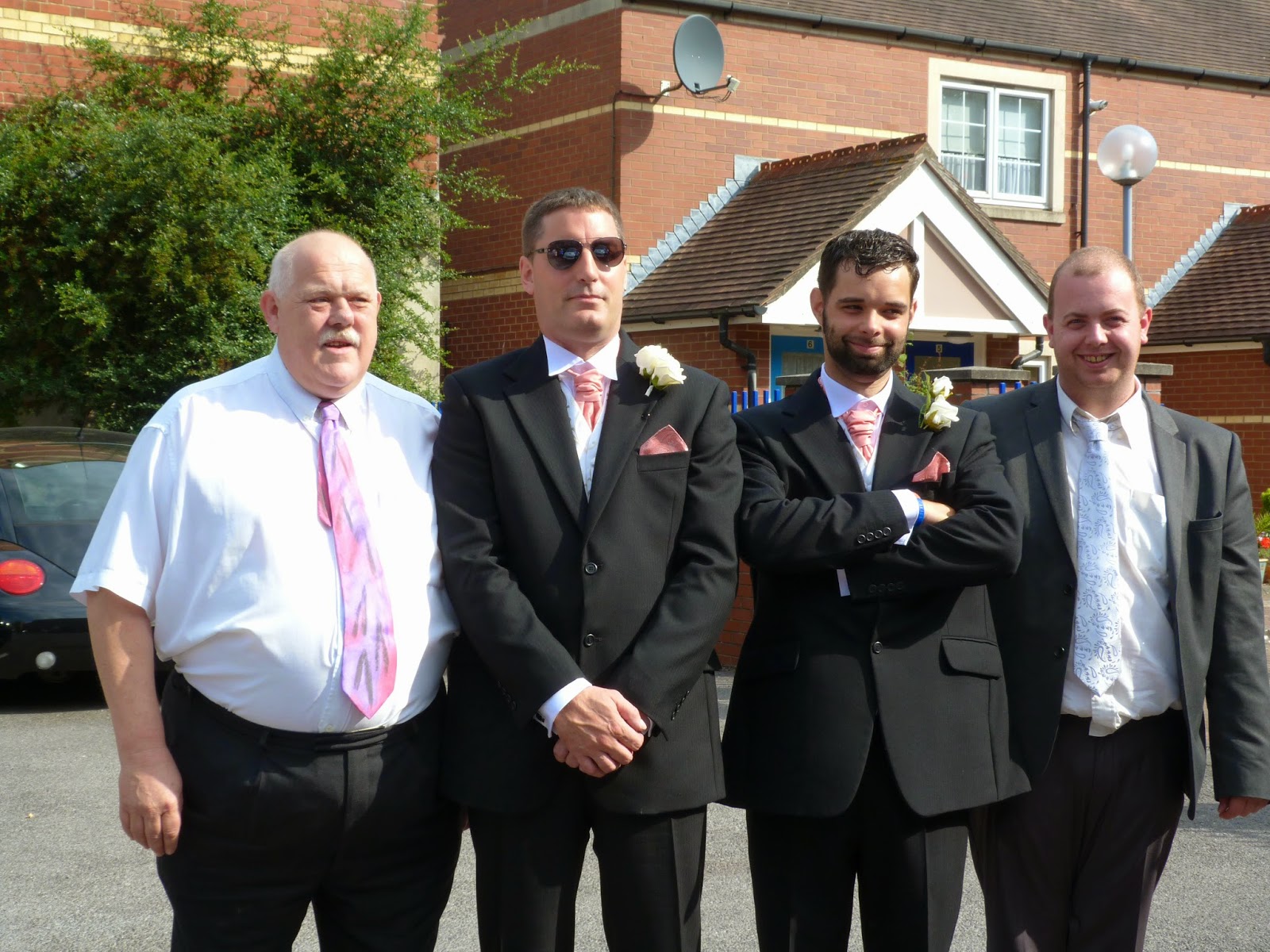 Anyhooooooo, I thought a few pictures would show what a wonderful day was had by everyone.
Starting with a team photograph. Mr M wearing a tie. That only happens at weddings and funerals. He chose the hand-painted silk one because it was pink and summery. Next to him we have the Groom, doing his best Blues Brothers impression and trying to convince us that he wasn't stressed, yes Mark we'll believe that.
Next is the Best Man, my eldest grandchild who said he would love to be best man for his uncle when his own Dad wasn't able to be there. 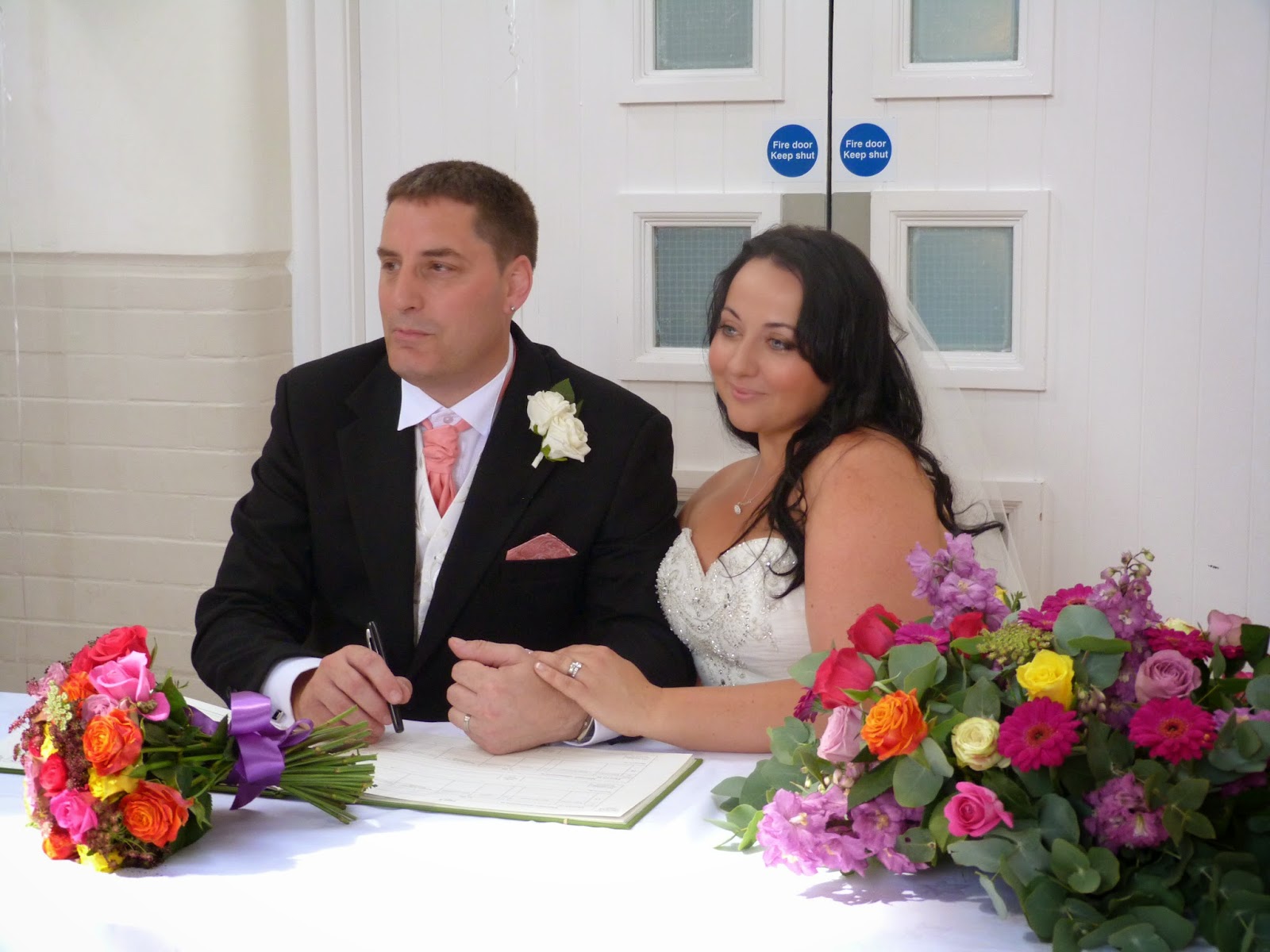 Next is my eldest granddaughter's partner, Rory, who is a really lovely young man. The sort of young man you hope your daughter will find and fall in love with. He is caring and attentive, loves his children and looks after them and will do anything he can for us.

After signing the register we had the chance to take a few more pictures and in this one you can see that the stress has gone from my son and his shoulders have dropped. You can also see just how beautiful my new daughter is! 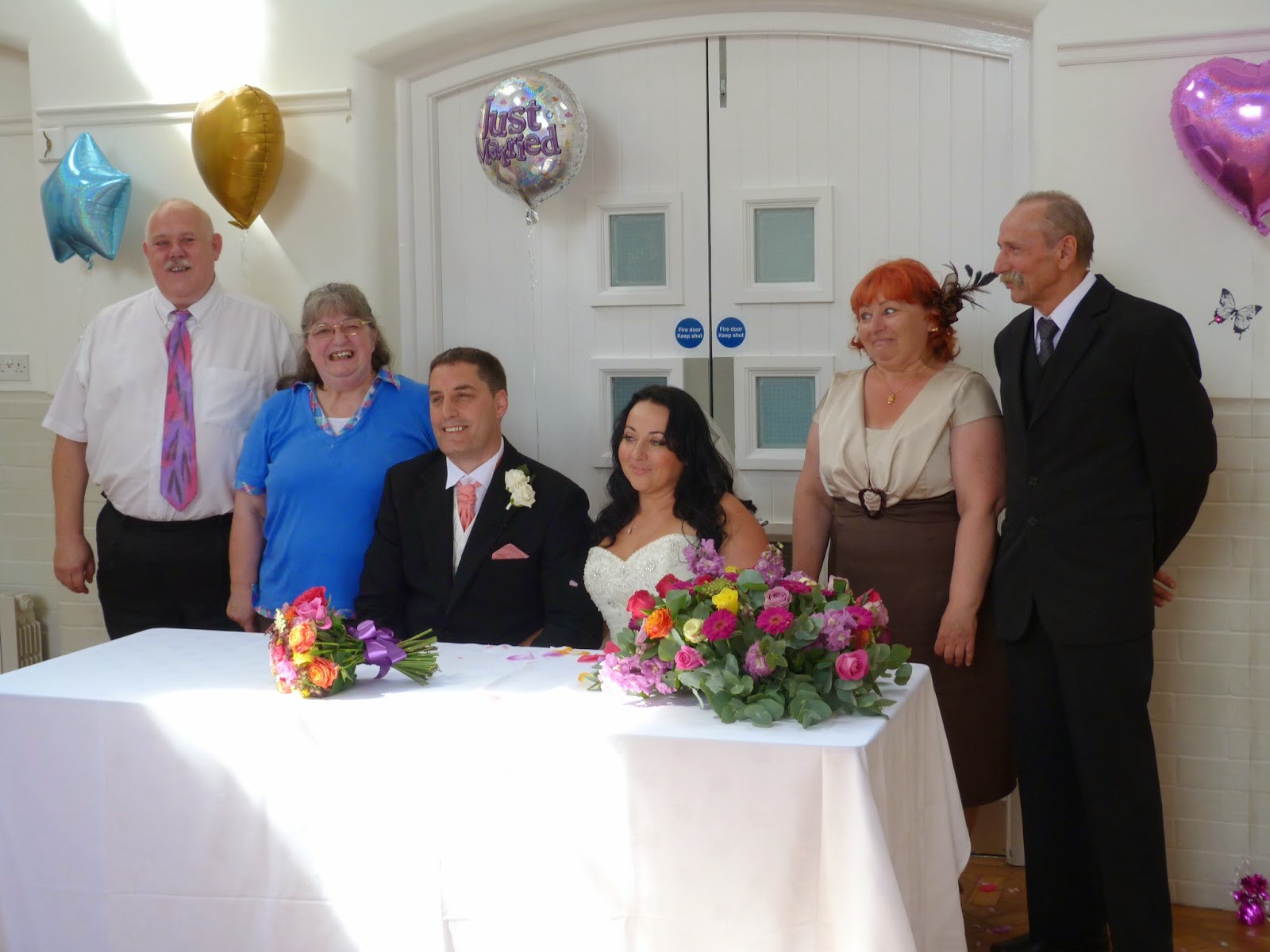 There has to be a picture of the Bride and groom with the parents. This was taken by  Rory with my camera. Everyone else was taking a picture of Rory because he had the greatest difficulty working out where the zoom was. Joanna's parents knew there was something going on but until it was translated into Polish they had no idea why we were all laughing so much. I bet they wondered what sort of a madhouse their daughter was letting herself in for. 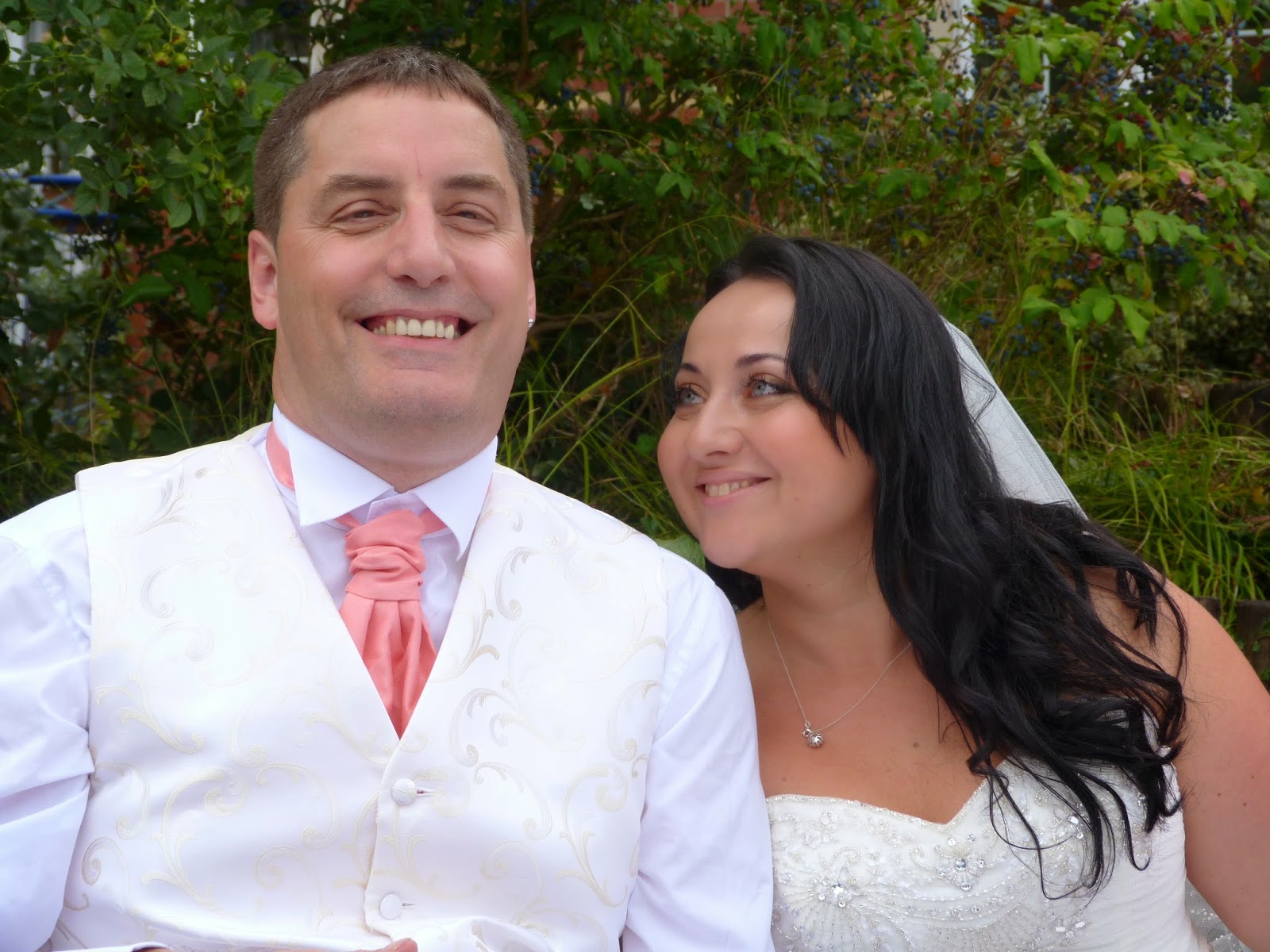 The wedding breakfast was outside in the communal gardens of the Centre. We were in a shady spot and everything just flowed. This is one of the happiest weddings I have ever been to. No one seemed harassed or upset. Everyone mingled, my daughter amazed us with her ability to say "lovely to meet you" three different ways in Polish in the same sentence. We were hugged and kissed then hugged some more.

Seeing my boy so happy after the long and difficult time he had on leaving the army has meant so much.

There ya go Mr M, now you know what we've been doing, you can relax too

I have to say that even though I disagreed with the doctor in the hospital at the time. I will be eternally grateful to her for giving me back my life.
Does that sound like Hyperbole? well it's not. It took something like four days for my body to get used to the new meds and to allow me to stay awake through the day. Then we went out in the car and we drove along a piece of country road that I really dislike. Narrow lane, high hedges, trees meeting over the top. All the things that have caused panic attacks in the past - in fact that very lane has caused me to be hysterical on one occasion. I was prepared for it.
It didn't happen.
When we got to the end I told Mr M that I hadn't even felt slightly breathless. He said "Perhaps the change in tablets was a good thing"
And that's when everything fell into place
Ten years ago I was put on the tablets for my blood pressure. Ten years ago I suddenly could not go out of the house on my own. As my parents had gone to live in the nursing home around this time I put my anxiety down to the relief from stress and tried to overcome it.
It didn't get better.
Now it is so clear that the betablockers were causing the anxiety and yet not once did my GP say anything about it. Not once did anyone query when it had started. I am totally relieved to feel normal again but at the same time I feel cheated out of time I could have been - I don't know, doing craft fairs, taking my granddaughter to the swimming pool for lessons, visiting my great grandchildren and doing ordinary stuff like walking into town to get my eyes tested. I am intending to do all sorts of things now.
In the mean time Mr M and I went out for a little ride the other day and we saw the sign that said Hedge Pussle Maze. "We'll stop there one day" I said "Do you want to?" he asked "yes please" I replied so we turned off and followed the sign and they had a butterfly Sanctuary and a tea shop and a miniature golf and a paintball thingy. It was raining so we scurried through the maze, which was wonderful and we were entranced by the butterfly sancturary and while I am not taking part in the ZIZO meme I couldn't resist doing this 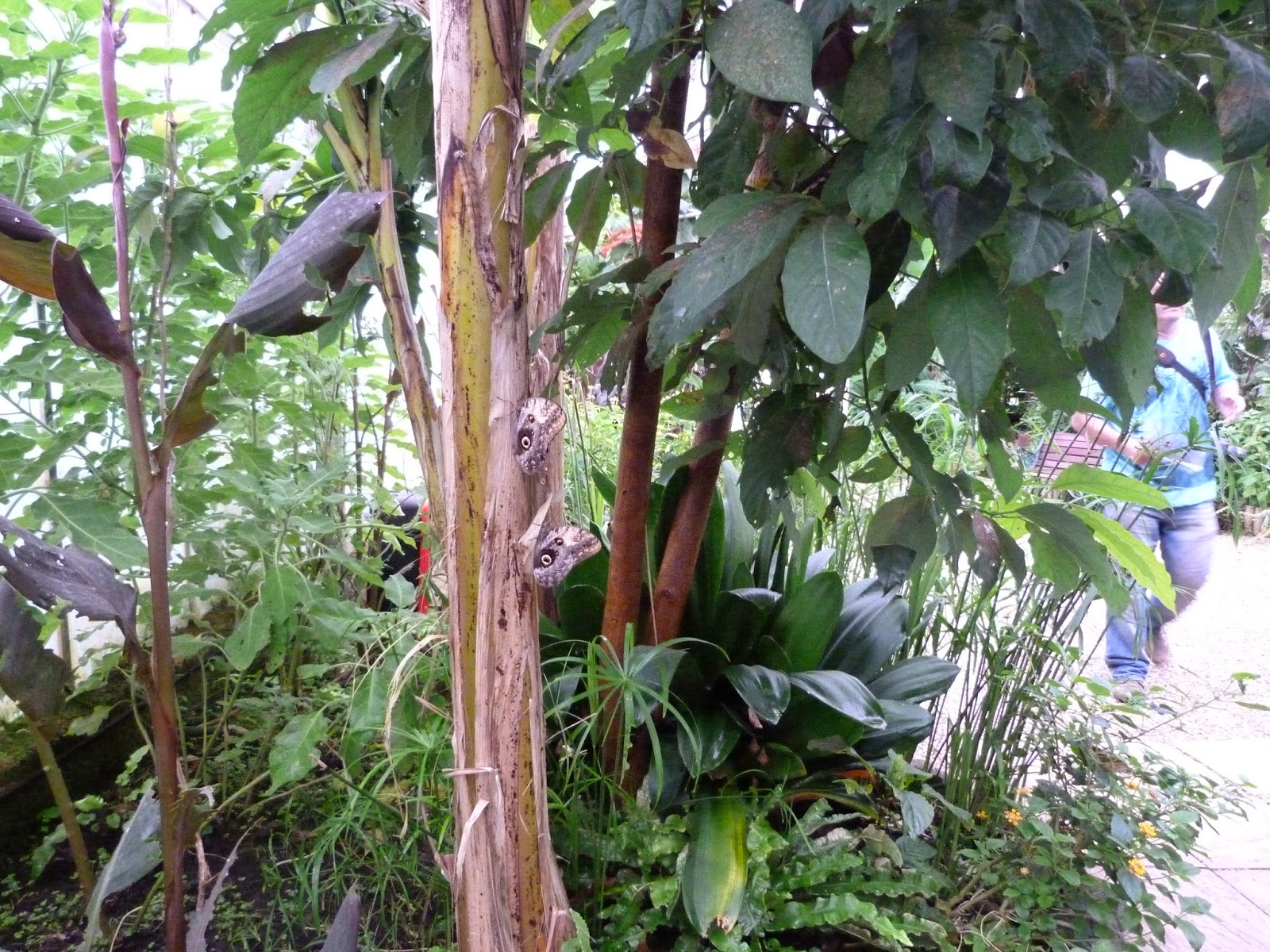 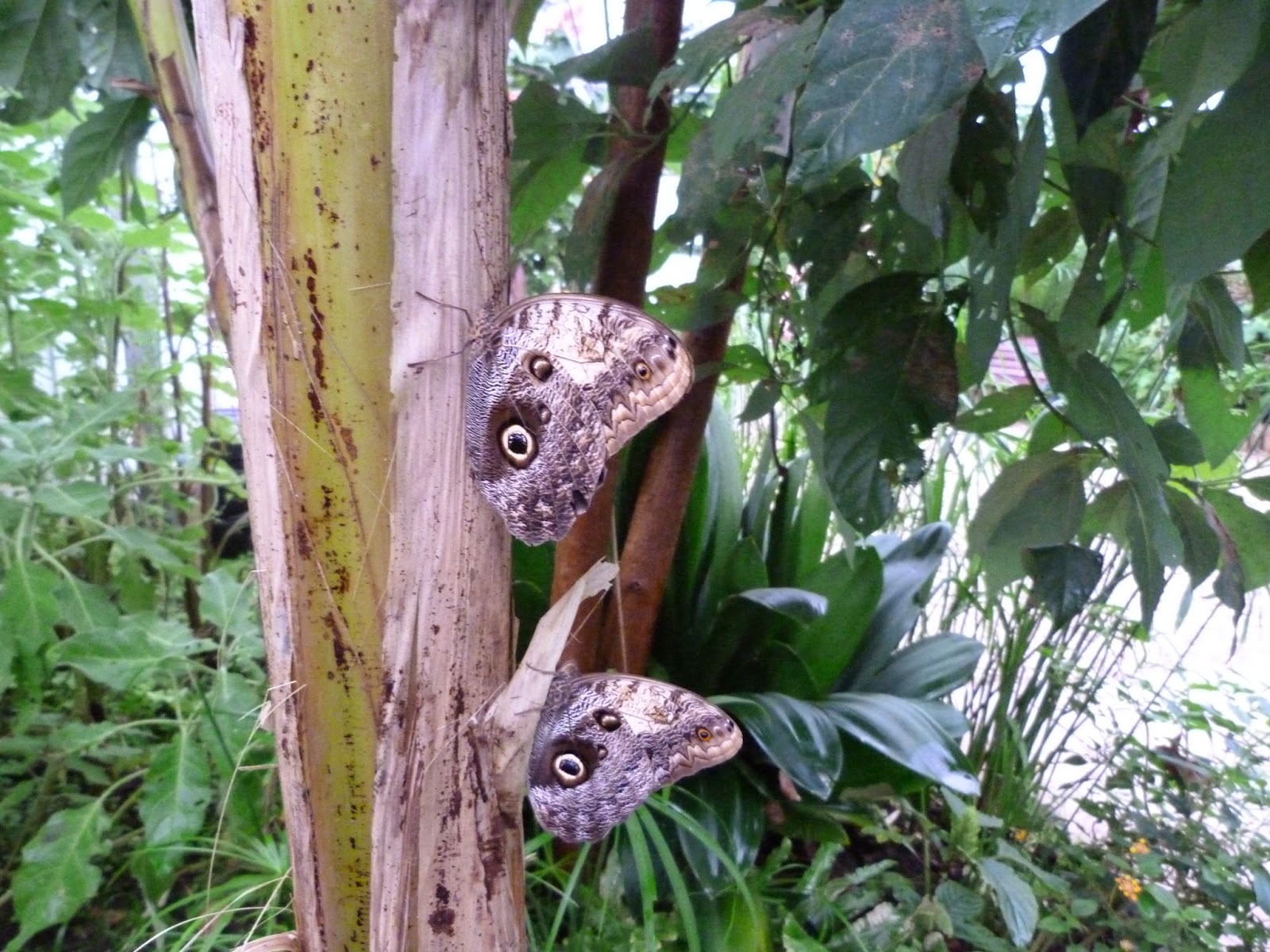 12 days in hospital getting my leg fixed seems to have worked. They have beaten back the eczema and this has shown that the worst looking bit is actually something called Lymph oedema. "they" have referred me to the appropriate clinic. So now I should be fighting fit and raring to go, right?
Well, the doctor on the ward was worried about my slow pulse. I explained that I inherited this from my father, but she thought it was caused by the blood pressure tablets.
"You get dizzy, yes?"
"no, never get dizzy"
"you have chest pains?"
Nope, never get those"
"You feel nausea, get headaches?"
"Nope, never"

In spite of this she stopped one of my tablets to see if my pulse would get faster and when it didn't she started talking about a pacemaker. I once again explained that it is genetic. but she has now changed my tablets for the ones that caused nausea, headaches and dizzyness last time, and were the reason I was on the other ones. She has also referred me to the cardiac unit because "you shouldn't have the dizzyness and nausea."
So now I am taking the tablets that also cause drowsyness so I sleep. When I wake up I feel sick. When I stand up I get dizzy and feel like I am walking through treacle. I will ring my GP if I can stay awake that long and get an appointment to review the tablets.
~sigh~
Thank goodness my leg is fine, and with all the sleeping I am keeping my legs elevated so no swelling now either.
Posted by Ladkyis at 03:09 10 comments: