Tonight my daughter and my granddaughter and I took part in a Lantern Walk with over 100 other Rainbows, Brownies, Guides, Rangers and Leaders.
We sang several songs and at 20.10 20/10 2010 we made and renewed our promise. I didn't expect to be quite as moved by this as I was.
I go to help with my daughter's unit occasionally but haven't really had much to do with the movement for several years. I had recently decided that I would join the Trefoil Guild just to keep in contact.
Actually this decision was a direct result of being told that the woman who was District Commissioner of the place where I was Guider is no longer a member. She upset me so much all those years ago that I would never be in any organisation that she was a member of. She spoilt Guiding for me and even after we moved here it was still the same county so she was still within striking distance.
I was going to say that what she did was a small thing but it wasn't it was huge and nasty and ... well it was spiteful. I was Guide Leader for two Guide companies, there were more than 40 girls in them and we had two Brownie Packs feeding into the guides. I was divorced, and had been for several years and during the course of the summer I met a man and fell in love. My children asked if we could all live together so we found a home for us all and when Guides restarted after the summer holidays I had a phone call from the District Commissioner who told me that as I was living in sin I could not continue to be a Guide Leader, effective immediately.
Yes I was upset, but I took what she said as gospel. I just didn't think she would tell me something that wasn't true.
It was not until Mr M and I were married a year later and I asked if I could go back as an assistant guider and she told me that as I had resigned I could not go back. This was when I quaght the first whiff of rodent.
I then contacted the division Commissioner who told me that living with someone I wasn't married to was not a reason to stop being a guide leader and she had been surprised when I resigned because she had thought I enjoyed being a Guider. I explained what had happened. She had a word with the District Commissioner who said that I was lying, I had resigned, that I never liked her and was trying to get her into trouble. The Div. Commissioner immediately backed off and said it was purely a district thing and we should sort it out. I knew then that it was hopeless to try and go against her and then we moved away from that district but by that time she was involved at county level so I stayed away.
Tonight was really good. I enjoyed being a part of the family of Guiding again. Seeing the girls from my daughter's unit being a part of it as they start out on their Guiding careers was marvellous and haveing my granddaughter there as a Rainbow was very special.
Posted by Ladkyis at 14:48 1 comment: 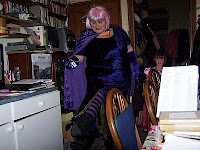 One of my four Granddaughters celebrated her 18th birthday a few days ago and yesterday was the party. I didn't go. I am really not a party person - at all. I hate loud music, no I'll correct that, I hate this modern marching music.
They call it dance music but all it is really is the same beat with different twiddly bits and it sounds just as mindless loud as it does at any other level. Songs should have words that fall tunefully on the ear not the rhythmic chuntering of rap. Some of which is quite clever but most of it is just look-at-me-I'm-a-bad-person-I-make-threats-to-the-back-beat-and-make-signs-to-ward-off-the-evil-eye. 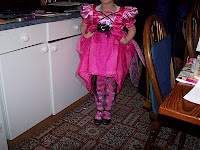 Anyhooooo. We were invited but decided that unless the party came here we would not attend. All her relatives from her maternal side came down from London to share her birthday with her so that was really good and I am told that the party was a great success. Youngest granddaughter - age 5 did go to the party, dressed up as requested. She stayed all night, danced all night and wore everyone out 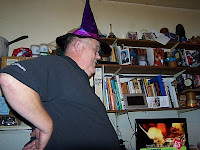 The excitement comes from two things. I have a letter printed in the October edition of Your Family History - the Star letter no less. I won 100 credits to use 192.com - excellent! and yesterday I arrived home from a meeting in Taunton (more family history stuff but this time with the South West Area Group of Family History Societies) to find that I am joint prize winner for the September competition on http://www.british-genealogy.com/ They have an excellent forum on the site that is so helpful and so friendly and occasionally they put on a competition. Mostly they are just for members but this one included moderators too so I could put in my four pennorth. Then then entries were judged by the members through a poll and I came joint first! I was so thrilled I forgot to look and see what the prize is. Not that it matters really. I am just so excited.
Posted by Ladkyis at 12:30 1 comment: 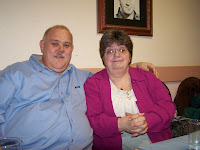 I have another blog in another place. I have had it for years and the circle of friends that I have live role-played with are the circle of friends that I regularly read with on there.
At present a few of us are doing a "meme" This particular one lasts for the whole of October and every day there is a topic to write about. Yesterday's topic was "Your Parents: in great detail"
I happily wrote my bit about how Mum and Dad met just after WW2 and then went to read what one of my dearest friends had written.
He made me cry.
He is estranged from his mother and has no contact with her. I have known him since he was 17 and came to our house to play a role-playing game with the group I ran.
He says I am his surrogate mother and tells everyone that I am wonderful and funny and all sorts of other really lovely stuff.
The best bit is that he says Mr M is a man of integrity and honour. This is absolutely true and it is so lovely to see someone saying it out loud.
No-one has ever said out loud all those nice things about me and it quite took my breath away. Then in the comments to the blog several other people agreed with him and said that we were their family of choice!
I am so so blessed! To have children and grandchildren like mine is really such a wonderful honour I never expected more. Now I am shown that we have really special friends who honour us with their friendship, that makes me truely blessed.
Mr M says it could just be that they want to be on the Christmas card list
Posted by Ladkyis at 04:23 2 comments:

I have just read another blog and it has stirred me up enough to want to write something. The person was very upset because they had taken a squirrel to the vet and it had to be put down. They were told by that if you trap or capture a grey squirrel you cannot release it back into the wild and could not understand why. They thought it was perhaps because the grey squirrel is considered vermin. That's part of it. The other part is that they are not a native species so releasing them is against the law. You would not dream of releasing crocodiles into our countryside because they are not native to this island so why should the grey squirrel be any different.
Because it looks cute, that's why. Because for some reason fully grown, mature adults seem to get emotionally tangled up and transfer their own wildly inaccurate feelings to an animal. This seems to mean that no one should shoot or trap or reduce the population of these interlopers because they are sweet. They are not sweet they are disease carrying vermin and these same people would be the first in line shouting for Something To Be Done if one of their family caught an infection or disease from this cute little squirrel.
Lets just hope they nver have to worry about that.
Posted by Ladkyis at 16:07 No comments: