A day for Remembrance

I knew today was going to be difficult. Even though my Dad died in October 2003 it is this day that springs into my memory as my first thought of him. I want to remember him as he was when he was with his brothers and sisters because he was always laughing with them but the memory of him standing in front of the TV in the kitchen watching the dreadful events in New York unfold haunts me.
Mr M is always pretty sensitive to my moods and he knew exactly how to cope with me today. We were potching as we say round yer, potching about in the house not doing very much - all those little things that tend to get left until they are bigger. Vacuuming, wiping work surfaces, scrubbing the water and food containers for the chickens. That sort of stuff. We had lunch and my goodness are we being good. and afterwards Mr M suddenly said "There's a Marks and Spencer outlet in The Festival park, I need new knickers, do you fancy a trip to Ebbw Vale?"
I put my shoes on grabbed the camera and we were away. Well, it was a delightful trip up the valley. If you are asking How Green is My Valley now then I have to say it is very green, beautifully lush and green. The conifer plantations are gradually maturing and being removed and they are being replaced with broad-leaved native trees. The light this has brought in is amazing and where everything used to be covered in a film of grey-black dust now the grass is green and the earth is brown in the rare places it shows through the vegetation.
We came home 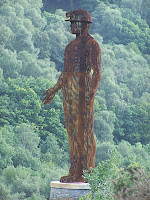 the "pretty way". For us this means trying roads we haven't travelled before. On the way up I mentioned to Mr M that a memorial sculpture to the 45 miners who died in the Six Bells Colliery disaster in 1960 had been erected and if it was possible I would like to see it one day. On the way home we saw a sign that pointed to the Memorial Car Park so we followed it. The sculpture is amazing!it is 12 metres tall and you can see through it but at the same time it is totally solid. I have never seen anything like it before. I have seen this artist's work before and if you can be a fan of an artist - well Anthony Gormley has fans - then I am a Sebatian Boyeson fan. This sculpture could step off that plinth and walk - and yet, and yet you can see right through him, like a ghost...
Just to make our day complete Mr M has bought an Actifry. We have seen one in action because my cousin has one so this was an informed purchase. Having bought it we just had to try it out and as peppered steaks with oven chips is the diet meal, yep the diet meal for tonight we did the chips in the actifry. They cooked in 20ml of fat. I have to say that again. I did two portions of fresh cup chips in 20ml of oil, that's less than a tablespoon full. They were the best chips I have ever cooked, no, really. They were crisp, dry crunchy on the outside and floury in the middle just like dream chips are supposed to be.
I love chips. I would happily live on fich and chips and the occasional steak for the rest of my life. Mr M insists that we have to eat vegetables and fruit too so I do eat pretty well. I have been reading the recipe book that comes with the actifry and there are loads of things that can be cooked in it. We had stewed plums last week at my cousin's so I will be having a go with some damsons we have in the freezer, if only so we can use the totally 0% yogurt with a little sweetener mixed in as a cream substitute.
It is very hard to cater for a diabetic on a diet. everything that is low fat has increased sugar or it is sweetened with aspartame and we don't like that. But I digress.
We came down from Six Bells via the old road and just as we were nearing Mr M's favourite houses - they are two storey at the front and four storey at the back - the road was closed and we had to take the diversion. This meant we had to go through Swffryd (pronounced soffrid). OH OH we also went through Llanhilleth and I am sorry to say that Abersychan no longer holds the title of "Back of Beyond" this crown has now been awarded to Llanhilleth. This was due, in no small measure, to the rugby club spilling out into the road as we came through the village. They made little attempt to get out of the way and I had visions of them pinging off the front of the car.
So a different cause for remembrance and it made the day lighter and more in perspective. I don't suppose I will ever forget my dad on that day but I do now think I can cope with the memory much better.
Posted by Ladkyis at 12:07

This is a lovely, uplifting post - thinking of you, hope you keep that postive outlook and keep remembering the good times xx