We are in the car-park of Morrisons in Ebbw Vale. We have had a late lunch and done a little essential shopping and now we are getting into the car to go home. We didn't intend to buy anything frozen but remembered we needed sausages.

This is why "it" happened.

We were supposed to be going out with the Bluefunnels but Mr B developed sciatica so travelling was no longer an option. We decided that we would go for a little ride somewhere, have a bite of lunch out and then do the shopping and come home - or we could shop first as long as we didn't buy frozen.

We meandered along the valleys roads, not really heading anywhere. Mr M asked me for the name of the little pottery museum we had visited last year, that had a little tea room, and it took a while for my brain to remove Nantyglo from the front of the list and replace it with Nantgarew but I got there eventually. He then had to remember exactly how we got to it. We try to stop at small local places and have a cuppa simply because it keeps our money local. We avoid the coffee house chains for the same reason so we were looking forward to putting a few pennies into the museum's purse.

We were welcomed by a lovely lady who then disappeared in the direction of the kitchen. We should have followed her straight away but we hesitated and were lost. a small man in a big sweatshirt cornered us and began a discourse on the history of the place. I rudely interrupted him and said "We have been here before" He nodded and continued as though I had smiled. Mr M moved to another display case, the man went with him and began another babble. Mr M headed for the door, I followed but was cornered briefly for a two minute piece on the canal. We escaped.

We then headed for Morrisons for lunch. We like their food and their coffee and the friendliness of the staff in all their stores. Not local but after trauma they are safe. We had fish and chips and did the shopping. strolled out to the car, put the shopping in the cool-bags in the back of the car and got in. I buckled up and Mr M started the engine.

Foot on the clutch, hand on the gear stick. Put it into gear and...

The gear-stick came off in his hand.

Well it would have done if that leather collar around it hadn't been so well fitting.

I rang the AA and pretty soon a large yellow van arrived and Derek was our knight in yellow armour! 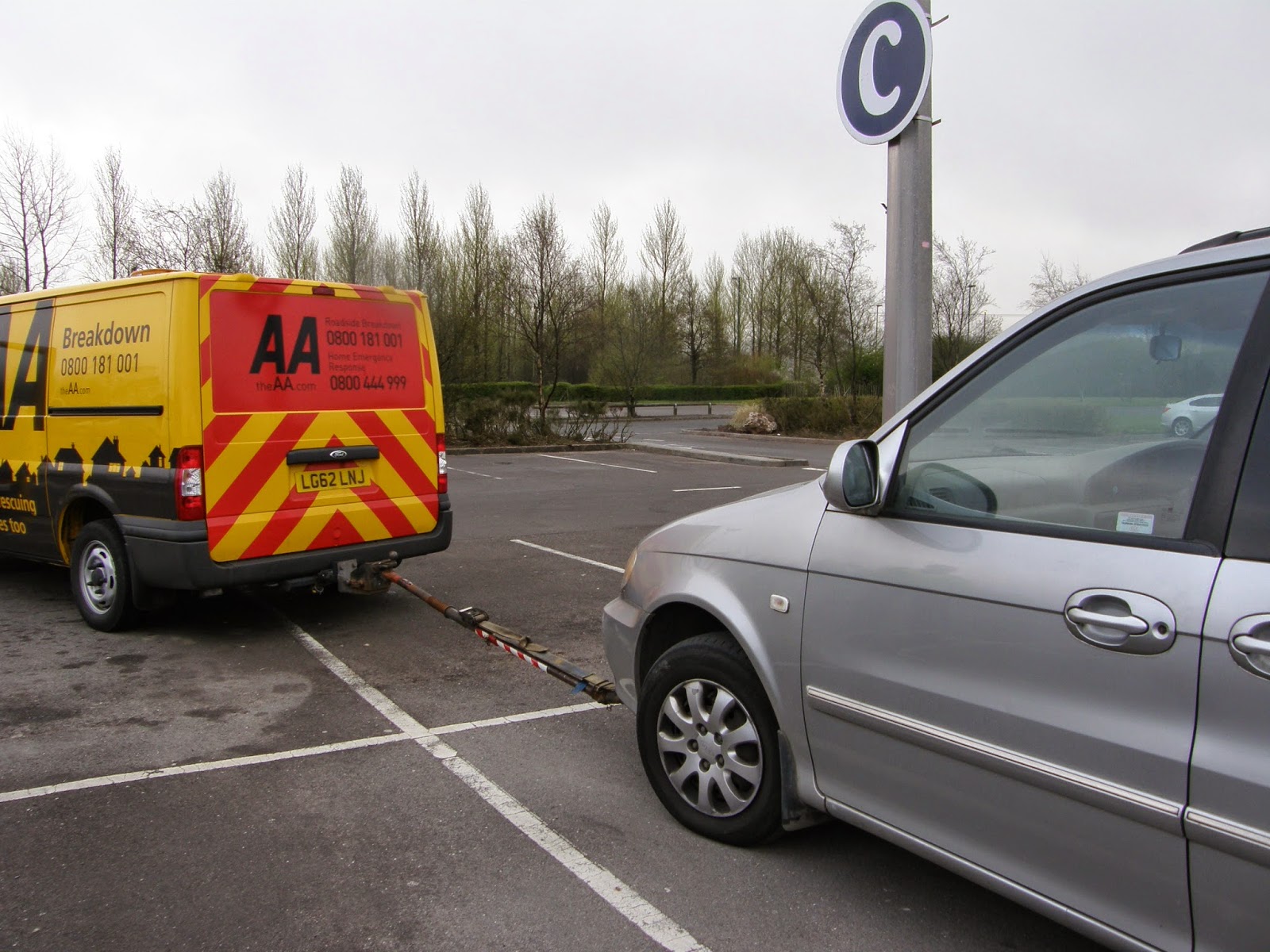 we were towed back to Newport. Poor Mr M was in our car while I got to ride in the AA van and chat to Derek all the way home. Verge of hysteria but able to control - so proud of myself.
We were taken to the garage where we put the keys into a note for our favourite mechanic pushed them through the letterbox and went home with our sausages still frozen.

Quite a day and that single moment when the gear-stick just flopped will stay in my memory for quite a long time.
This a part of a Meme started by Alexa at Trimmingthesails Now you've read my story why not pop over and read all the others? I know you'll enjoy them
Posted by Ladkyis at 03:56

Sounds like quite an adventure! Nothing simple about hat moment! I hope you have a quiet and relaxing Easter!

That's some adventure. What is it they say in Harry Potter? "mischief managed". You managed ;)

I so enjoy your stories! Thanks for sharing,
Rinda

Gosh what an adventure. Well done for coping, I know it is sometimes hard for you :)

Oh my goodness, that must have been a horrible moment :(. But you weathered it really well, and that's very uplifting to read :). I enjoyed your description of your day before that too - thank-you so much for linking up this month, and I was so pleased to see you!