Me on Monday - out for a ride

It's been a go out for breakfast and stay out all day kind of a weekend. 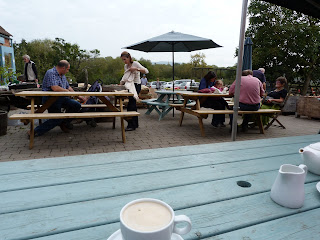 We are still sorting the contents of F-i-L's house and after taking five boxes of china and glass to one charity shop on Wednesday last week and then three bags of clothes to another one AND the four bags of trousers and jumpers to the night shelter, well, I thought we deserved a bit of a break so I packed up a large bag of books and we got up eary-ish on Saturday and went up the A449 to Whitchurch, near Ross and stopped at Jo's for breakfast. She has bookshelves and for a donation to charity you can take books home with you. I totally filled up the shelves and decided that we will take another bagful when we take S-i-L on our adventure in two weeks.
We could have come home after breakfast but we felt in need of a little "Us time" so we carried on up past Ross and headed along in the Ledbury direction.
It soon became obvious that Mr M had a destination in mind so I sat back and watched the rain splashing on the windscreen and we talked and laughed and suddenly we were at Clive's Fruit Farm near Upton on Severn. I took the picture last year when it wasn't raining. We sat inside the coffee shop this year.
I bought enough apples to make several crumbles and tried to remember what else it was that I thought I would have a go at when I bought some apples. I probably won't remember until next year now.
We headed back a different way and it looked as though Mr M was heading for Gloucester. Then I connected the dots in my head and realised that when he said "Oh, no pumpkins" he had a reason for wanting one and the next obvious place to get one was Over Farm Market. I was right.
He chose a small pumpkin. I raised my eyebrow. "Pumpkin soup" he said, and all was made clear.
One of the things from his Dad's house is a soup maker. It had never been used and I had to ask the manufacturer for a copy of the instructions. Now, it seems, Mr M is keen to have a play.
Saturday night we sat in the front room and I knitted while he snoozed. He has been having sciatica pain recently and can't sleep for long while lying down so he has to keep changing where he sits and sleeps
I have stopped loudly nagging him about going to the Dr and just do it with looks and eyebrows. As my eyebrows seem to have decided that long enough to obscure my vision is their newest ambition you can imagine how effective they are as semaphore flags.
Sunday we sleazed all day. Moving slowly between computer and chair and lunch table. I cooked the pork chops we bought at Clive's and they were delicious. YS came home from his weekend away and scoffed his dinner then went to bed and we sat again while Mr M snoozed and I completed the sweater for Miss Boo and started a cowl/hood for the craft fair - not the Frost fair as I keep calling it - on Tuesday.
That's me on Monday. Thanks to Sian at FromHighInTheSky for creating this Meme and encouraging me to write something every week.
Posted by Ladkyis at 00:57

I'd love to find a good fruit farm round here. We have a great farm shop with good pies; but I'm always talking about finding a great pick your own.

I know I've said it before; but you are still working away so I'll say it again: you are doing a fantastic job on the clearance and charity shop runs. Plenty of people are going to benefit from your hard work

Oh a magical mystery tour sounds so much fun. And well done on persevering with the charity shop sorting. Have a lovely week x

Pumpkin soup is one of my favourites. The best thing about this time of year is all the warming soup and stew recipes!

Oh a soup maker - now that would be a handy kitchen gadget to own. I like pumpkin soup a lot. Hope you have a great week ahead & well done you with all that clearance effort.

No matter where you are, I find, men all have the same reaction to that suggestion. I have had a doctor chastise my husband, though, and tell him to listen to his wife, but that has been somehow erased from his memory. Love stopping by and visiting! How did the soup turn out?

What a lovely day you've described!
My sister has just bought a soup maker and is determined to try and convince me that I need one too. I must admit that the pot of soup she brought round in a supreme effort to prove how lovely it makes soup was absolutely delicious.