Monday, Mail and Me - new clothes!

This week was half term and there was a bank-holiday and we were required to make an emergency dash to deliver the spare contact lenses so that My daughter could see to drive home from work. This gave us the perfect excuse reason to pop into Raglan Garden Centre on the way home and have an earlydinner/late lunch. We had fish and chips but noticed that they do afternoon & cream teas. I stored that knowledge for another day. 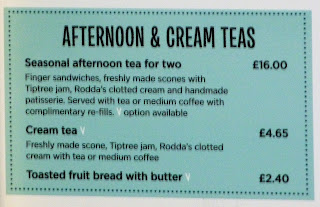 I took a look around their shop. I was really looking for something different for birthday presents as this family moves into Birthday mode in June. Starts off Quietly with Wicked Uncle Cliff and then in August for Son, Daughter-in-Law and Grandson, September holds me, Daughter, other Son, Great granddaughter, Cousin Andy and several special friends October has Son-in-Law and two Granddaughters. November a Grandson and a great grandson and December a granddaughter. I won't even think about next year yet. The shop was full of pretty, expensive, pretentious shi stuff. I didn't buy. 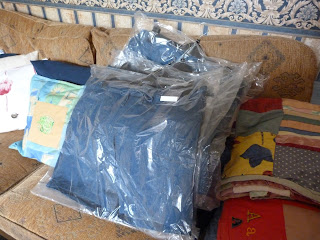 Some mail arrived, mostly election stuff but there was a parcel of shorts for me. I have found that the ones from Bon Marche are really comfortable. I bought two pairs last year and was continually washing them and wearing them. I treated myself to some new ones and now I have sufficient long trousis and shorts to see me through the summer. I so rarely buy clothes it was quite stunning to work out that the jeans I am wearing are some that I bought when Miss Boo was two years old - she is twelve now. I stopped worrying about the expense of new ones when I realised that I had really got value for money.
Posted by Ladkyis at 03:45

there was a magazine article once that talked about how much 'per wear' for your favourite clothing over a season. I laughed as most of mine get worn until they wear out, not just a season!