Another week of hurry-up and wait 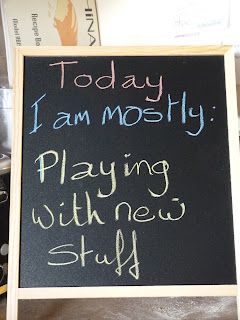 Sometimes you get as few days when lots of things could happen ... but they don't. That's how last week seemed to be.
Youngest Son has a new job because his old one disappeared. He now works delivering stuff for Currys/Dixons/PCWorld. He has been strained in the art of installation and given the uniform - the polo shirts are a dirty pinky colour and the hooded top is a dirty grey - lovely!

Mr M has seen the sleep clinic advisor and will be collecting some form of machinery next week to help him sleep better. One thing that was confirmed is that he doesn't - DOES NOT - have sleep apnea so that means I can sleep without worry.

The really nice decorators have been and estimated and they will be painting the visible bits of wall and ceiling in the kitchen and the skirtings and door in the bathroom - so it will only have taken a year to complete them! Woooooo!

We went to Costco on Saturday. This is not something anyone should do by choice. The world and his wife were there with their children, and they were all in front of us in every aisle. We bought a few Christmas presents and lots of things we found we desperately needed - that always happens in Costco. I will be making Lemon Curd tomorrow and we now have bacon for special breakfasts at the weekend.

DD arrived on Saturday to cut Mr M's hair. He claimed he had to keep blowing it out of his eyes it was so long. He might have been exaggerating a little as his hair never gets to more than half an inch long EVER. She brought with her a little gift for us. Pictures! A fabulous picture of Miss Boo and her big brother. He came down to see us and to go to London with his Dad to get his Visa for Japan. He is going there to study for a year as part of his degree!

Two lovely pictures from the birthday one of Miss Boo with her cousins and then one with Eldest son surrounded by his children - and Miss Boo because Little M refused to have his picture taken without her. Big M looked rather splendid with his beard and Miss K looked happy and as though life is treating her well.

When I have scanned the pictures I will share them.

What Have I watched on TV? Long Lost Family, Who Do You Think You Are? and Victoria. Oh and a strange programme on catch-up called "Out of Thin Air" about some murders in Iceland. I tried to watch a programme called American Ripper about a man who was America's first serial killer and his great grandson thinks he was also Jack the Ripper. I say tried because three times I put the first episode on and three times I woke up as the credits rolled.

That's it for this week - more family history stuff has been done and the newsletter has gone out. If any family member hasn't received it then send me your email address and I will send it.
Posted by Ladkyis at 03:05

Pleased to hear that sleep apnoea has been discounted, and hope the new 'toys' will make a difference. Sounds as if you've had some nice family times and looking forward to the photos! Hope your week is full of nice creating.

My husband has sleep apnoea and the machine he has to wear to keep the oxygen circulating makes a noise which is almost as bad as the snoring used to be!

Costco---I know exactly what you mean! We belong to Sam's and it's the same thing. I really don't go very much because I'm way too much of an impulse buyer. Since there are only two of us now, we like something, but don't need 50 of it---we certainly don't like it anymore when we reach the end! I try to stick with non-perishables. Occasionally I'll find a good gift or two. Luckily, ours isn't too crowded. Well, when you go at 8 a.m. there aren't meany people there at all! I won't go on Saturday.