We did a lot during the summer even though Mr M was struggling with his legs and I had developed a funny breathlessness. We popped up to North Wales to take presents and stuff and we did it on Eldest Son's birthday so we shared the birthday tea and joined in the candle ceremony 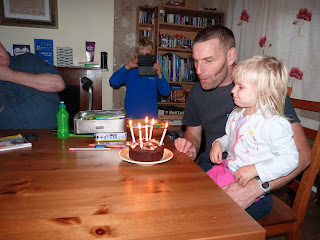 I had a burst of creativity and made this quilt for a very special friend who now lives in France. It spent a while in a bag before we could parcel it up and send it to her. She expressed a certain amount of joy when she opened it and now calls it her Precioussssssssss 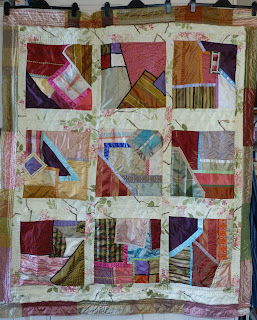 Cousins came to visit! I love it when that happens. Roxanne and her lovely husband Al came to stay. Someone asked if I was worried in case we didn't like each other as we had never met in person. I did have a momentary qualm but then I realised that in our messages and emails we had both laughed at the same things and I just knew we would be fine. Were we? Well as long as we were awake we were talking. We talked about the family tree we took them out and did Roman on the one day and medieval on the next day and all the time we talked. Al and Mr M just nodded and added the occasional word when we drew breath. All too soon it was time to take them to the station and wave goodbye. It was wonderful! 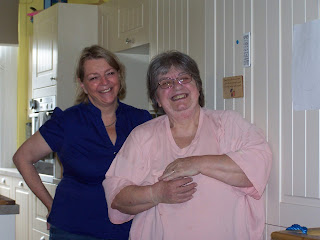 The next day Cousin Sandy and her husband Bob arrived from Arizona to take us out to lunch. Well not just for that but it was part of their plan to have time to actually talk and not get swallowed up by a huge family group. I Started the visit off by falling over on the patio and scaring everyone. grazed elbow bruised knee and shattered dignity. Sandy and I have known each other since we were small. She is the cousin that could come out to play in the stream with me and she would go back into the house without a speck of dirt on her and I would be head to toe in mud. Gosh I envied her that ability. It was so good to sit and chat. I have just realised that it looks like I am wearing the same shirt - I have two the same. 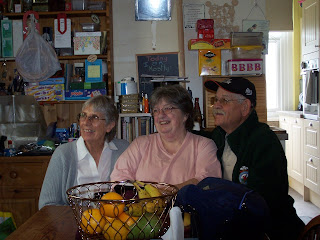 Then David and Terri came to see us! all the way from Australia. David is descended from my great grandmother's younger brother. There is a likeness between us. Again the conversation flowed and we had a great time. When DD and her husband went to Australia to visit her uncle (my ex husbands brother) she took the opportunity to meet up with our newly discovered relatives and she had met David and Terri then. It was lovely for her to meet them again and it was so good to sit and listen to that fabulous accent. They said I had a Welsh accent but I can't hear it myself. 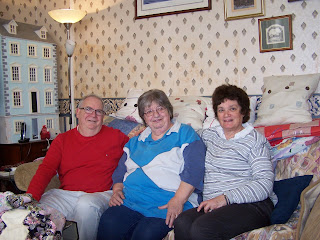 Then it was off to Tenby to celebrate the special zero birthday of my youngest son. We did the same for him as for the others and had spent three years finding daft stuff to wrap and put in a box. My idea was that the presents would soon be forgotten but the time spent with us as they opened them and the laughter that ensued would be remembered forever. It was absolutely chucking down with rain so we sat in the car while he worked his way through the box. 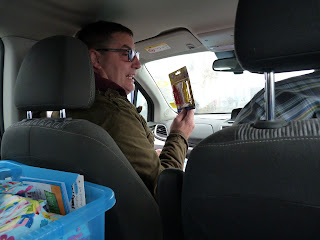 Then we went out for a meal with him and his lovely lady Helen. Mr M was wearing his only shirt. He does have a drawer full of shirts but it seems that there are only two that get photographed. He put on his good grief another picture face. It was a very nice restaurant and H and I agreed that it fell into the Well-we-never-have-to-go-there-again catagory because it was overpriced. 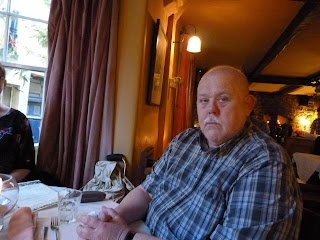 The end of the month of September saw us celebrating two more birthdays, mine and DD's. We went out for a meal and this was the closest to a team photograph that they would allow. Miss Boo sat between her two favourite men and we had a chance to just sit and talk without domestic stuff getting in the way - and Mr M made sure he was wearing the other shirt! 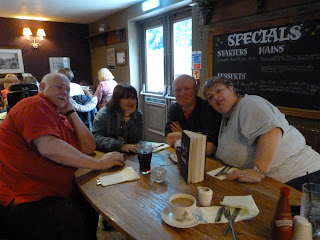 The month of cousins was great. I loved that I got to see all my children on their birthdays and, of course, the hugs from grandchildren are something that can never be bettered.
Posted by Ladkyis at 02:28

How lovely to hear from you again. My word, you have had a busy time, but looks like you had great fun.

Goodness, what a lovely lot of family meet ups and connections!

photos show that you have a great fun.
have a wonderful day

Lovely to read your post and share a bit in all those super family celebrations! Glad all is going well and hope the effects of the fall and the 'funny breathlessness' are clearing up now.