This is a grand idea from Sian at High in the sky to continue what was begun as the Christmas Club. 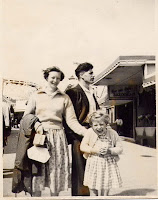 My story is, once again, a memory from my childhood (which, my children tell me, was obviously a long time ago). I was around four years old and we were still living in the Nissen hut that my dad had built when I was first born. Dad had started his own business repairing farm machinery and making steel farm gates, oh and building corrugated steel sheds. He won a contract to repair the dustbin lorries for the local council and as these had to be fixed when they were not being used this meant that he would work through the night.
He would work all day, come home around 4pm, have something to eat and go to bed until about 8pm then get up and go back to the workshop to work until 6.30am when the council workmen would arrive to collect the mended lorries. As a time-served motor mechanic he also fixed the engines from time to time. The council were slow to pay so my Mum never knew from one week to another if there would be any money for food.
She kept a few chickens at the bottom of the garden and as my Dad had managed to do a deal and rented an orchard for a few shillings a year he had three or four pigs and some geese. They had to be shut into their pens every night and most of the time Mum would bundle me into my coat and we would walk to the orchard together.
I was recovering from an abcess in my ear and the doctor said I was not to go out in the cold so mum put me on the floor in the huge kitchen - no open fires or gas stoves - and gave me the pots and pans to play with. She told me years later that she ran to the orchard only to find that one of the pigs was still out and would not go back into the sty. It took her a lifetime, she said, to get that darned pig shut up and she flew back to the house worried to death that I would have managed to kill myself.
I was fine.


I had opened the cupboard door and found lots of tins of food. I thought I would help Mum by removing all the labels because she always did that before opening a tin. When she came in I gave her a beaming smile and said "Look, I helped."


She was so relieved to find me safe and so horrified to see all those tins - fruit tins and vegetable tins are exactly the same shape - stripped clean of their identity that she swept me up in her arms and hugged me so close it hurt. I thought she was laughing and asked her what she was laughing at. She told me it was because she was so happy at how helpful I had been.


I was in my late twenties when I talked to her about it, my grandmother had recently died and we were doing the do-you-remember thing that is so important after a bereavement. Mum confessed that she hadn't been laughing at all but sobbing over the fact that I was safe AND all those bl**dy tins with no labels! My Dad thought it was hilarious and for years after he would ask Mum if it was going to be pot luck for dinner.


She got to be a real expert at gently shaking the tins and guessing what was in them from the sound they made. She could never distinguish between tinned peas and fruit salad though.
Posted by Ladkyis at 13:45

LOL - not the sort of "help" she needed after pig-chasing! A lovely memory.

Oh, you've done it again - another wonderful story! I'm so glad you are joining in again - I always enjoy your writing so much

You supply the inspiration and I will do the remembering and writing. I am keeping copies of these memories and I have chosen a 12 x 12 album so that I can scrapbook a page with the story and some pictures. Something for my children to fight over when I am gone, hehehehehe

I love to read your stories, what a brilliant idea to scrapbook them for 'later' :)

Loved reading your story.. We must be related - I once helped like that too. :) Looking forward to next month's story.

I can't believe how far behind I am with your blog - this wonderful story has been waiting for me all this time! I love the thought of chicken, potato and fruit salad, or peas with cream for pudding!