Family likeness can you see it? 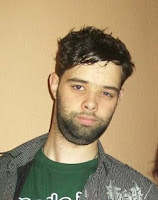 I have just read Ruth's blog about then and now and family likeness and thought about some of the likenesses in our family. The likeness that I find truly fascinating is this one. The monchrome picture is Leroy. He is the grandson of my great grandmother. He was born in USA in the 1920s and until recently none of the family here knew anything about him. His mother married an American sailor at the end of WW1 and she went to America in 1921.
My father and mother went out to see her in 1981 because they had managed to re-connect. My Dad had not seen hi aunt since he was 6 years old so it was a very emotional reunion. She told him a little about her life but glossed over the number of times she was married and how many children she had.
The other picture is my grandson. He is 21, about the same age as Leroy in the picture. His hair grows the same way, the eyes and ears are the same and there is - to me - something in the expression that has been passed down through the genes, and with the rich genetic mixture that they both carry I shouldn't be amazed but I am.
I think it is simply that because there is such a rich mixture I am amazed that there is any likeness, there being so much to choose from.
So all those ties take us back to previous generations and make me want to know more about our ancestors. It's good to look at the pictures and realise that the nose has come down through the generations, and then DGS tells a story and we see flashes of his great grand father in the way he speaks and the way he leads us through his tale.
Fascinating
Posted by Ladkyis at 14:29

That's a truly amazing likeness - as I said to Ruth, it really does make you wonder about how far back that look goes

We have a photograph of my 3 x great grandfather, born 1819. He has to have been like his parents Who were both dark-haired and dark eyed. I hoped we might find a portrait of the 4 x great grandfather but no luck so far. He was an art dealer so I live in hope.

Oh, my - how amazing is that? You've made me want to get out all our old family photos and hunt for likenesses!