﻿We went to a Christening on Sunday. Not just any old Christening, this was my youngest grandson and the ceremony had been cancelled before Christmas because of the snow and the Chicken Pox.

﻿﻿
We travelled up on Saturday, pausing at the OK Diner in Leominster for elevenses

and at the OK Diner on the A55 for lunch. This is not to say that we are fans of the OK diner, you understand, just that we like the food there ~steak and eggs mmmmmm~


Anyhoooo, we arrived at my son's house in Colwyn Bay at around 2.30pm and were immediately swept into playing with the garage by my slightly older grandson. Soon after this my son's two children from his first marriage (are you keeping up? Oh well done!) arrived and filled the house with noise and bustle.
His oldest son is 21, his daughter is 18 and now he has two children under 3 years old. The young man in the background is The Boyfriend.
I love that my son is just as involved with these children as he was when the others were small and his patience is endless. Not like me. I have to step away from the little ones and chill out. Don't get me wrong, I love them dearly but small children are hard work. 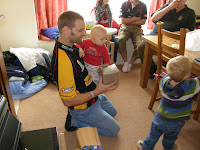 It fascinates me that from the time they are born until the start school is only five years and yet they learn to sit, crawl, walk, run, dance, eat with a spoon or fork drink from a cup AND they learn to talk in at least one language and they can do grammar too! No wonder they are hard work. The teenagers are the ones I worked with as part of my previous life and they fascinate too. Thinking about it I just find people so interesting so I'll stop chuntering and get on with the tale of the Christening.


OH, on the way up the A49 we were following a little black car that did everything possible to keep us behind it. Mr M wasn't bothered because we were very close to the OK Diner and we could pull off and let the little black car find someone else to irritate. When we got to the roundabout it indicated and pulled off into the OK Diner. It parked in the disabled space and we travelled on to the other side of the doors and parked in our usual space. We looked at the people from the little car and it was an aged hippy man complete with white hair in a pony-tail and a white haired lady driver. we skipped into the diner before them and we were seated at the other end to them. We decided that while the driving left a lot to be desired they couldn't be all bad because they like the OK Diner.
Back to North Wales. The Christening was part of the morning service and as it was Easter Sunday and the biggest day of the Christian calendar it was absolutely beautiful.
I managed to capture the moment when the priest made the sign of the cross on his forehead. 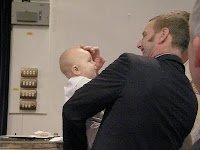 The whole congregation renewed their promises to G*d and even though the hymns are a bit dirge-like for easter it was still a lovely ceremony. The sun was shining when we emerged from the church and loads of people from the congregation came up and welcomed the youngster into the family.
Back to the house for food and chat - I spent the time trying to get pictures of everyone. I realise now that I am just not pushy enough to grab someone and say I want your picture for the christening album. I did try though and got some lovely ones of the baby.
We came home on Monday, the pretty way. This meant driving through Bettws-y-Coed, Llangollen and then across to Oswestry so that we could drop down to Leominster and stop at.... you're there already aren't you? We couldn't park in our usual space as it was taken. We went in and while waiting to be taken to a table I glanced across the diner and there, sitting at the end was an aged hippy complete with white hair in a pony-tail.
"Ooooh," I thought, "he looks just like that man on Saturday"
"Spooky" said Mr M behind me, "He looks just like that man on Saturday."
"Is it the same car in the disabled space?" I asked. Mr M peered out of the window "It is," he said triumphantly, glancing back across to the man. "And there's the lady just coming back from the loo"
The girl came at that moment to take us to our table and, of course, she took us all the way to the other end of the diner. Isn't that spooky? to be travelling who know where at the same time as us and to be in the diner on the way back.... spooooooooky!
So that was our Easter
Posted by Ladkyis at 02:32

Yesterday we drove past a man and I said to my husband - "oh, that man used to come into the Business Library all the time when I worked there and I haven't seen him in twenty years." I saw him again this morning!