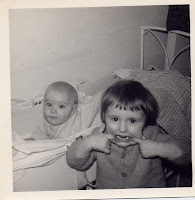 Searching for a photograph of my oldest son when he was about six months old triggered a memory and I thought it would make a good Sunday Story.
When My oldest son was about one year old and his big sister was two I bought a book called Manxmouse by Paul Gallico and every night I would read a chapter to the children before they settled down to sleep. I had already read The Day Jean-Pierre was Pignapped and The Day Jean-Pierre Went Round the World to them so another book by this wonderful author was bound to be enjoyable.
Manxmouse is the story of a mouse made by an inebriated ceramist magically comes to life and goes out into the world. Being originally a ceramic mouse he has no fear so when something totally strange and noisy appears he isn't scared at all. The monster explains that it is a Clutterbumph and what it does is make those strange scarey nighttime noises so that we can imagine them into whatever we want them to be and when we have scared ourselves enough we can stop imagining and the Clutterbumph will disappear.
I read this chapter to the children, settled them down into bed and tucked them in. I switched on the nightlight on the landing and went downstairs.
I had no sooner sat in my chair with a cup of coffee than the tom cat chorus started out in the back garden. Then there was a loud crashing noise followed by the sounds of several cats swearing and hissing loudly. I heard my son start to cry so I headed up the stairs to settle him again, the noise in the garden still continuing.
"It's alright Mikey," said my daughter, "It's only the Clutterbumph. We can tell it to go away"
Oh for goodness sake! I thought, that'll destroy any faith she might have in her mother. She'll tell it to go away and every s*dding cat in the neighbourhood will sit in my garden to serenade next door's female that is coming into season, just bloomin' great!
"Go away Clutterbumph!" she yelled, "Go away, we not scared!"
I took a deep breath as I reached the landing, ready to comfort and try to explain and I suddenly realised that all the noises from the garden had stopped. Not a hiss or a growl. I waited to see what would happen.
"See, Mikey, told you it was just the Clutterbumph. go to sleep now"
And he did.
I crept back down the stairs and wrote a letter to Paul Gallico telling him what had happened and he answered my letter, telling me that Princess Grace of Monaco was the Grace to whom the book is dedicated and that he was sending her a copy of my letter because if the book had helped one child to overcome their fears then that made it worth the writing.
I still have the letter and I still have the book. I have read it to all my grandchildren many times over the years and I will probably give it to one of them to read to their children.
This story has been brought to you through Story Telling Sunday originated by Sian at High in The Sky
Posted by Ladkyis at 14:07

What a wonderful, wonderful story. I love how you write a moving, touching tale and temper it with humanity and humour. The ending left me speechless (which doesn't happen very often) - I can't wait to tell my mum. She has always been a huge fan of his writing and she will LOVE this! What a piece of treasure to have.

Thank you for joining Storytelling Sunday. It's always a pleasure.

What a wonderful story. I'll have to check into this book from Great Nieces and Nephew.

As Sian says, this really is a wonderful story. Thankyou for sharing a precious memory with us:)

What a wonderful and amazing memory.

That is a wonderful story - I am going to have to look for that book for myself now - you told your story so beautifully too! Wonderful treasures to have as well. J x

I had forgotten all about Paul Gallico...and how kind of him to have written back to you. A lovely story
Alison xx

What a lovely story, and how kind of the author to write to you, wonderful memories to pass on through the family.

What a fantastic story. I have never heard of Paul Gallico (and we are complete book worms here and have been since the children were tiny) but I am going to the library next weekend to see if I can find him on the shelves there!

How wonderful that the neighborhood cats were Clutterbumphs that night instead of their normal nuisance selves. He fact that you have correspondence with the author makes this story and your book even more special!

How utterly fantastic! Well done you on writing to him, and how wonderful to have this letter and story. It really needs a good scrapbook page, and a place in a frame on your wall!

WOW - what a fabulous story and how sweet your daughter was to reassure your son.

I couldn't agree more with all previous comments, I have thoroughly enjoyed reading your story today :-)

What a great story and so well told! Aren't kids the most amazing things?
Rinda

How fabulous is that? The story just kept getting better and better, and what an ending! :)

Wonderful story - what a great big sister she is.

Oh your story is simply wonderful and you bring it to life with your writing. Perfect.