It's all about Pavlov's dog... 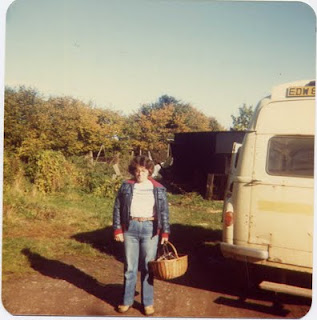 I was just reminded about something that happened when we lived at Rhiwlas Mill (In the picture I am pulling a sulky face). I say we, I mean my children and I were living with my parents. The children's father had left and we were getting used to life without tension and shouting.

Every night I would take my cup of hot chocolate or milky coffee - we used a lot of milk in those days because we had several goats that I milked every day and before the goats we had our own house cow.
I digress.
I would take my cup of whatever up to bed, carrying it in my right hand with the current reading matter carried in my left. On reaching the bedroom doorway I would throw the book onto the bed, which was to the left, and then turn slightly to my right to switch on the light. The light switch being on the right of the doorway.
I always did it this way, had done for the last seven or eight years. Reach the doorway, throw with the left hand turn to the right and switch on the light. I could do it with my eyes shut or in the dark. Ah It usually was dark, that's why I had to switch on the light. Anyway, I had become accustomed to doing it, a habit you might say until one night..... You're way ahead of me aren't you?
Yes I picked up the cup in my left hand because I had several small things to read. I was a member of a letter writing group and the package had arrived that day. Eight letters to read with pictures and all sorts of stuff and I took it to bed to enjoy it in private. I also had a book and a magazine. I picked them up into my right hand and then picked up the cup in my left. I reached the bedroom doorway, threw with my left hand and then froze as I realised that it was the cup.
Hot milky coffee soaks through a duvet really quickly and through sheets and into the mattress. It is really difficult to get the stains out too.
Now this wouldn't have mattered a bit if I had been able to keep quiet about it but by the next day - after a most uncomfortable night in a sleeping bag on an airbed whilte the mattress dried out - I just saw the funny side and had to tell some of the people I worked with.
It was also one of the first things I told Mr M when we were getting to know each other. I was reminded of it tonight when I picked up my coffee cup with my left hand because my right hand was full of the letters my Mum wrote to my Dad just before they were married (Why I was holding them is a story for another day). I thought "I had better not get confused about which hand has the letters" and then I remembered what I did way back in about 1979. I thought I would write it down somewhere so it doesn't get lost.
Posted by Ladkyis at 14:44

And I'm glad you did. It's (another) great story.