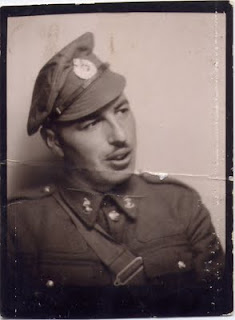 We had 24 people at our reunion yesterday. This included Russell and Cristina who joined us via Skype. Even though all we saw of Cristina was a two fingered wave over the duvet because it was 7am there and the music from the nightclub close to their apartment had kept them awake until 4am. The junior section of the family was totally enthralled by the pictures of Russell on the computer and his great ability to work with kids was obvious even though he is thousands of miles away.
Cousin Andrew brought the photographs his parents had collected and we went through them like locusts looking for familiar faces. He had one of my dad that must have been taken when he was about 25 so Andy has let me scan it. It had a nasty fold across it so I did a little photoshop on it to reduce the torn and buckled look.
Cousin Pat remembered the names of several unknown ex husbands of family members and her husband Tony had the birthdays of all cousin Bernard's grandchildren.
Tony also gave me the final draft of something he had written for the Gibbon Gazette (Our family newsletter) so a new edition should be going out to the family in September. We had a special reunion edition with the story of my Grandson's expedition for his Duke of Edinburgh Gold Award and this seems to have woken everyone up to the fact that they can all put a bit about their own grandchildren in it.
It was disappointing that my eldest son couldn't be there because his youngest son started with the spiking temperature and hacking cough on Wednesday and the thought of driving from Colchester with a potentially sick child is not to be contemplated. Today my son told me that the OOH doctor diagnosed measles or Rubella last night and while we would prefer it to have been teething that caused it we all feel quite pleased that the decision not to travel was taken. I cannot imagine anything worse than being no far from home with a sick child no matter how nice you husband's family is!
Much time on Saturday was spent catching up with family news. It was good to see cousin Leonard and cousin Bernard talking again after a bit of a rift and to see how beautiful Cousin Paul's wife Jean, is looking now she has lost weight. She did it by counting calories and I am now enthused. I have no idea how long that will last.
Son-in-law brought his posh camera and loads of pictures have been taken. They will be published in the GG for everyone to see and the story of the real uncle Charlie is also going out to those who couldn't be with us.
So another great day, roll on the next one
Posted by Ladkyis at 08:33

When I was little I started a family newsletter called the G- Gazette (it didn't have your circulation numbers though!)

It sounds like a wonderful time. Our family gets together every two years. Old pics are the absolute faves, especially when they are accompanied by the story around the photo.