How your words can haunt you

Story-telling Sunday is here again, for more on how it started and who else is playing go to Sian's Blog here is my contribution. 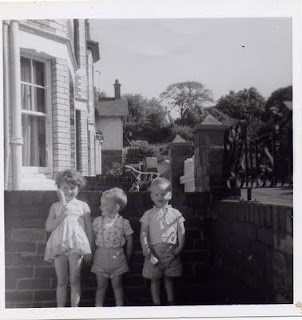 When my three children were reaching into their teenage angst years they sometimes had to do things they would rather not do. This was at a time when there were still supermarkets in the middle of towns and people used buses or, saints preserve us! they walked to the shops to get their provisions. I have a dodgy back because one of my horses fell on me when I was 14 and left me with clunking vertebrae. Sometimes it is fine and then I overdo things and...... you've done that too? well how amazing!

Anyhooo, I had to go shopping or there would be three starving teenagers gnawing on the edge of the table and as my dad made it I wanted to keep it without teethmarks.
"I need your help to carry the shopping today" I said, leaning against the front door so they couldn't escape. "If you will all come with me I will cook extra chips, just like the chip shop"
"With Curry sauce?" asked Eldest Son.
"Can I have onion gravy and BREAD?" asked Youngest Son
"Can we have Mayo as a treat?" asked Darling Daughter
"Ooh, yes, I'd forgotten Mayo," said both boys in unison. They glared at each other for thinking alike then gazed expectantly at me.
"I'll do any or all of those if you will come with me and not complain" I watched as they glanced quickly at each other before Darling Daughter nodded and said "It's a deal"
They gathered the shopping bags - even in those days way back in the early eighties I was taking my own bags to the supermarket - I digress.
We shopped. They hated the tedium of wandering up and down the aisles with me trying to work out which was the best bargain and was it on my list. They spread out to gather the shopping into the trolley more quickly and so end this torture. Eldest Son was eager to be off with his friends while Youngest Son was practising his backhand in the toiletries aisle.
I pushed the trolley and tried to gather them together like an anxious hen.
I had lost sight of all of them until I rounded the end of a shelf unit and there was the Eldest son with his back to me and Darling Daughter and Youngest Son some distance down the aisle, facing me.
"Where's the Old Crow now then?" asked Eldest Son. The expressions of sheer terror that flitted across the faces of Darling Daughter and Youngest Son will live in my memory forever.
I counted two beats - one --- two.
"She's behind you," I said, in my best quiet but deadly voice.

Oh, it was so worth it! His whole body jerked as though he had received an electric shock. He remained facing his sister and brother but I didn't need to see his face, I could tell by their faces what he looked like. I remained calm and emotionless for ages -- well, ok for at least five seconds and then I started to laugh. I tried so hard to be cross but I never could. They had so much bad stuff from another source they didn't need me to be a harpy too.
He turned around and had the grace to apologise. Then he totally made up for it by giving me a hug in the middle of the soap-powder aisle in Tesco. All three of then carried all the shopping AND helped me put it away.
Eldest Son went on to join the army and served in Northern Ireland in the Bomb squad and in the first Gulf War, earning himself several medals in the process. Youngest Son also joined the Army and served in NI, Kosovo and spent a very anxious four days in Germany during the first Gulf War where part of his job was to watch the casualty lists as they came in so that he could prepare the letters to the families for his boss to sign. He spent the time waiting for his brother's name to come up on his screen. Darling Daughter moved to Manchester and spent twenty years building a career in NHS Admin before finding the love of her life, getting married, having a baby and coming home to be closer to family.
Now you can see why I consider me to be the most fortunate person I know - even if I am an Old Crow sometimes.
Posted by Ladkyis at 01:46

What a wonderful story...I'd have loved to have seen his face!

Fabulous tale - with a brilliant punchline and heart-warming ending - the love shines through - even old crows have big hearts!

ah memeories of childhood abound. we lived 2 miles from the shops and in the holidays we always helped with the shopping. it wasnt so bad on the way as it was all downhill but on the way back the opposite obviously. carrying several plastuic bags full of tins and boxes we all got home with heavy mark embedded into our poor hands and sore feet. i love being able to shop onlione or go in my car as the memories of those sore hands are traumatizing :-))
jo xxx
ps: even my mum now gets a lift to the shops and back

What a lovely heartwarming story - I can just imagine you trying to be cross but bursting out laughing - what we mothers have to go through! (My two have always called me 'the witch' although I try to hide my broomstick!)

This is a wonderful story of children well-raised...as their adult lives attest. Good for you!

you must be very proud of them all

Always, always a treat to land here and settle down for a read! I laughed, I cried, I enjoyed every word. I always do.

Thank you for adding such a perfect story today.

What a lovely story - i really enjoyed reading it :-)

What a great story - and I can imagine those great expressions on their faces!

LOL - caught!! Would loved to have seen his face.

Oh I bet his expression was priceless. Thanks for sharing the story with us.

What a great story tell you are! I love your cadence, and what a funny tale woven inside. Congratulations on such a lovely family.
Rinda

I look forward to your stories so much. I love that photo, but then it is so familiar, It could be mine! Your story is just so uplifting and such a beautiful ending, yes you must be a very proud old crow indeed. I wonder if he remembers that day?

Brilliant! I can just imagine his face and how his heart must have sunk when he realised you were right behind him!