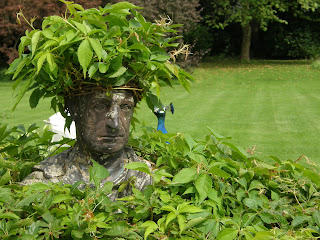 When Mr M worked "continental" shifts in the steelworks I knew where we were. I could work out what shift he was on for weeks in advance and it was good. As an example his rota meant that, starting from a Monday he would work a morning shift on Monday and Tuesday, an afternoon shift on Wednesday and Thursday, a night shift on Friday, Saturday and Sunday and then have Monday and Tuesday off. Then mornings Tuesday and Wednesday etc. 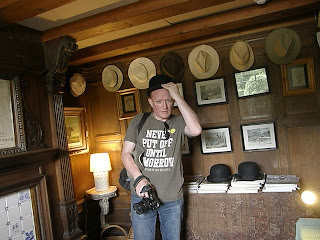 Then he went from working on the production line to working in the office. Bad! horrible! I hated it. no more popping out for an afternoon when he was on a morning shift we were stuck with 8.30am to 4.30pm Monday to Friday. Our days out were confined to Saturday and Sunday and I hate it! 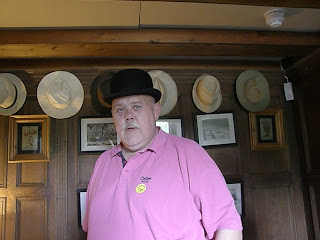 I am quite jealous about sharing my time with him so asking my daughter and my favourite son-in-law and delightful granddaughter to come with us was a rare occasion. I am so glad we did. 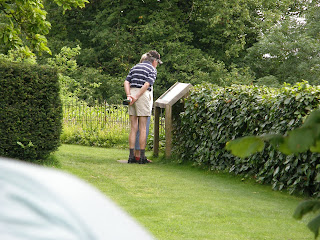 We took them to Newark Park. A National Trust property not far from Wotton-under-Edge. Until last December it was lived in by a tenant but it was still open to the public. I loved the feel of the place then because it really felt as though it was lived in. Now it feels as though the place is a holiday let, ready for occupation but not really having a heart. It is still the most delightful and quirky house, a joy to walk through and you really can imagine yourself living there

The teashop in in the basement and to get in you go through a window! you have to remember to duck really low. We watched one tall man fold himself up to get in - not the man in the shorts although his legs were what made me take the picture. He looks like he is wearing his school shorts from when he was twelve! Good legs though.
We had great fun watching the faces as they discovered all the things we had learnt last time we went. We had a cuppa and then Mr M stayed at the table while the rest of us walked through the gardens. It was a delightful walk until we were coming back up from the lake and the gentle slop we walked down suddenly got very steep and it felt like the north face of the Eiger. Not that I have ever climbed it. It was good exercise even if I was red-faced and breathing heavily. I was, as the nurse told me I should be, breathless but still able to speak. We then did a little detour to Cam to visit my sister-in-law but she was out so we came home via Gloucester and Chepstow.
I saw three cricket matches but by the time the camera was ready we were three miles down the road. Digital cameras - TUH! This forty mile an hour photography is darned hard work.