Just made my heart swell... 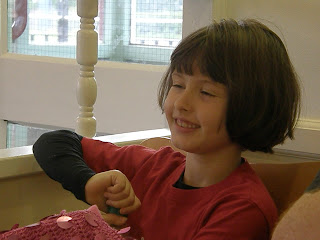 Miss Em is feeling much better today. She had the dreaded lurgey before Christmas and was off school for the last week of term, always a downer when so much exciting stuff is happening. She felt a little better on Christmas Day but by that time Mummy and Daddy were sharing her germs and Grandma and Grandpa were recovering. The week after Christmas she slipped back as the secondary bacterial infection took hold and the first lot of antibiotics failed to make an impression. She reached the end of the week with a visit to the out of hours doctor - I just love that the acronym is OOH DOC - and some antibiotics that really meant business. By Sunday she had bounced back, had a couple of good night's sleep and she went back to school today. Daddy is on afternoon shift this week so I get to collect her from school and feed her until her mother gets home from work.
I LOVE this special time with her. She talks about her day. I tell her little bits about my day and we do crafty things or read a little or just watch TV a bit - as long as it's not cartoons I can only do cartoons once a week on a Friday.
Today at lunch time the phone rang and a nice female voice told me she was the school and asked if I was Miss Em's Mummy, "I am Grandma," I said, "What's wrong?"
"There's nothing wrong," said Nice Voice, "Miss Em has come to the office because she thinks her Mummy might not realise that there is no Gardening Club this afternoon and she wanted us to ring home to make sure that everyone knows that they should come to school to fetch her at the proper time."
I said thank you and I would be there at half past three and I put the phone down.
She will be eight years old next month and yet she had the common sense to go to the office at lunch time and ask if they could ring to make sure that she wasn't left waiting at three-thirty. I would never have thought of that at her age and if I did I would have just worried about how I would get home and begun making ever more fanciful plans about what to do when no-one turned up. I certainly wouldn't have thought it through like that.
When we got home after school I told her how proud I was that she had thought about it and said "Thank you so much for doing that"
"you're welcome" she replied "Can I watch TV for a while?" So for her it was no big deal. My heart just swelled fit to burst. I was so proud of her.  To me, her mother, her father and her grandpa it is a huge deal. Just needed to share
Posted by Ladkyis at 15:47

Miss Em is such a little sweetheart---I love her too! There's just something about those darling little girls that just grab your heart! I'm glad everyone is feeling better.

Aw! She sounds like one "together" kind of a girl. I'm glad she's feeling better too: was anybody well at Christmas this year? It feels not!

that is really lovely. It does amaze me how mature they can be at such a young age.
Hope you are well
c

One smart cookie you have there, and saved a heap of worrying on her part and it wills stay with her for a long time. I am amazed as I blog hop how many people were totally out of action this Christmas, it is such a shame as we spend so much time, effort and money on trying to make it a memorable time. Annette #37

Oh she is growing up. You're right I never would have thought of doing that at that age. Glad to hear everyone is on the mend.

What a sensible young lady! Glad she was so smart.