The one about the snow 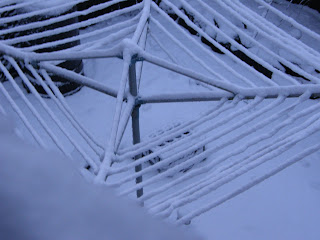 Look at my washing line! isn't that cool? Well, frozen actually, but you know what I mean. I love the way the snow was falling gently enough to first stick to the line and then to build up.
I went down the steps, just after taking this from the kitchen window, and when I opened the door to the chicken run they stuck their heads out of their house, looked at the snow and went straight back to bed. I filled their water and food containers and hung a new cabbage on the wire but not even that treat could tempt them out. so no chicken footprints in my snow! 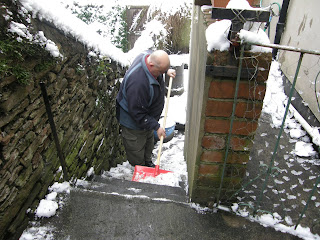 Mr M said he would clear the steps for me and then sat in front of the TV until son-in-law arrived. While S-i-L was changing the bulb in the study Mr M donned his coat and boots and ventured outside. We think it is because the snow shovel is new and he doesn't want anyone else to play with his toys until he has had first go.
The steps are now cleared and have road salt on them 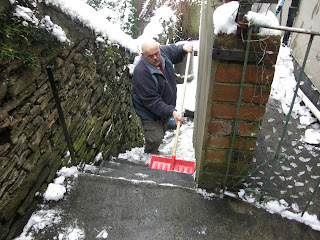 Look! can you see the way the snow on the chicken wire on the gate has melted into a lovely pattern? Isn't that beautiful? It looks even better when you are inside the doors with a steaming hot cup of coffee and a bacon roll - special treat for us at the weekend - a huge tiger bread roll, or a Giraffe roll from Sainsburys with several rashers of crispy bacon and a few mushroom slices. no need to eat again until tonight.

I am so glad we got the drain in the corner fixed before the bad weather. Now at least the water will run down into the sewers and not onto the steps through the holes as it used to.
I simply had to have a blog about snow. It has become such a rare occurrence in this area. I hope my daughter will take this chance to show us pictures of Miss Em in the snow

Good thing Mr. M got those stairs cleared. Looks like they could be a serious, slick problem in winter. I'm doubting we'll get any snow this winter. We don't usually get much, but every now and then we'll get a good covering. I just love the clean look of it. I could just see your "clothesline" (as they are known here) with a bright red cardinal perched on it!

I love the photograph of your washing line!
Rinda

Thank you so much for the kind words about the quilt, from a quilter, they mean a lot!! Loving your washing line, not loving those snow covered steps!! Eeeek, and had to laugh at Mr M wanting to be first with the snow shovel... wouldn't happen in this house as it always seems to be me that shovels the snow!! I'm with the chickens.. stay indoors in the warm!

I nearly bought one of those shovels recently just because I thought the display in the shop looked so colourful and enticing..

We finally got some snow on Friday, but the ground was so wet (isn't it always here?) that it didn't stay. So I'm enjoying your snowy pictures instead.

Love the picture of your clothesline and I'm glad Mr. M got those steps cleared before they became icy. As for the chickens - I cant' blame them. :)

I had to laugh at your comment because in the last few days this quilt/sewing game has cost me a fortune in fat quarters and DH has had to buy me a new sewing machine!! LOL ;)

I took one look at the snow and wished I could go straight back to bed lol... We got some salt/grit stuff for our front steps, much needed at the moment!

I'm with the chickens - a cabbage wouldn't tempt me out of bed when it is snowy. :lol:

Glad the new shovel and salt worked and yeah for drains that do what they should.