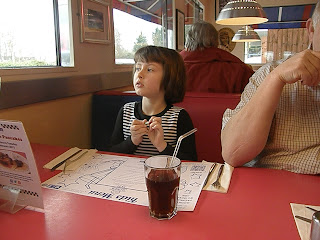 We went out for lunch today, and we took Miss Em with us. During the course of the ride Grandpa was pretending to get her nickname wrong and she was pretending to get cross with him. Her nicname is longer than her real name but the end of it is Booboo bear. Grandpa kept saying "booboo fish" and things like that and then he want on to other things.
When we were back at home the teasing and pretend crossness continued and when Mummy came to collect her she said "Mummy, tell Grandpa my real nickname"
"Oh" said Mummy, "let me see. was it Booboo sauce?" "No!" "Was it Booboo chip?" "No" "Was it Booboo fish? "NO! It's not food Mummy!"
This is when Grandma added her four pennorth and said "Booboo snotfood?"
"Oh yes, " said Mummy "Was it Booboo snotfood?"
The look of disgust on that nearly eight-year-old face had to be seen to be believed. "Mummy that's AWFUL!" she said, and turned her back on both of us in disgust.
We are still in the doghouse even now, but it was really worth it just for the face.
Posted by Ladkyis at 11:32

Miss Em is adorable! I love her spunk!

What a wonderful story!
Rinda

This really made me laugh! My Dad used to do this sort of thing with Ben and Penny and still does it with his younger granddaughters now!