Family History and why I had to be there. 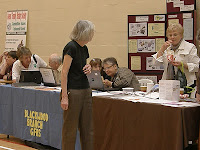 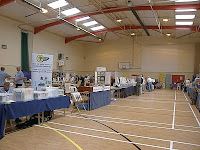 On Saturday I went to Gwent Family History Society Open Day. It was held, this time, at Rougemont School. The old venue was County Hall but that has been demolished now to make way for a housing estate - funny how they discovered concrete cancer at County Hall just about the time that building land prices began to go up. Oh, OH, I must digress a little and tell you this. When the developer began the process of examining the plans and maps of the site to see what hidden expenses might be there they discovered that under the County Hall was not only the basement where the archives used to be kept but a nuclear bunker! They were very surprised, apparently, and told the local paper that no one knew of its existence. I knew. I asked my cousin and he knew too. Now I wonder how I knew. I think my Dad must have told me, but how did he know?................. enough already! back to the Open Day. 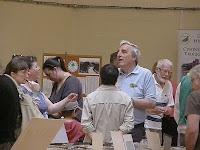 I spent most of the week trying to think of a way to get out of going. I am Editor of the Journal for the Society and it is kind of expected. It is a crowd and I don't do crowds to well yet. There would be lots of people I know and like. It was a strange place, but that meant I would get to see inside the gates of Llantarnam Hall and that's long been an ambition - ever since I went to primary school the other side of the fence.

I saw loads of people I haven't seen for ages and did not even have a hint of a panic attack, never gave it a thought once I was there and involved. Then I met Hazel who had brought her friend because she has just started her research. They asked me which of the Branches of the society would cover Llandogo because Kathryn had ancestors from there and from the surrounding area. I pointed to the Chepstow and Wye Valley branch and said that Jonathan, who was busy talking to someone, would be the person to ask as he lives in the area.
Then I asked what name she was researching. If you are not a family historian you won't have done this but once you start your research it is the first question you ask when meeting a new researcher - they might be after one of your names and that might mean they could be related and...... you get the picture.

"I'm looking for ROSSER" she replied "All over that area and in Clytha and Llanarth and Raglan."
"When we lived in Raglan,"I said, "the house we lived in was owned by a ROSSER family for most of the latter part of the 19th century."
"Really? where did you live?"
"Rhiwlas Mill"
"That's my family!" she said quietly - I lied about that. She didn't quite shriek in my ear but she did grab my arm and we did jig about a bit - ok we did the happy dance. She told me some of the names and I promised to send her some of the pictures that were taken over the years.
In the back of my head that little voice sounded just like my Dad and it said "See, I told you that you had to be here, now you see why" So thanks Dad I have been able to send pictures of the mill to someone whose family lived there before WW1 and it has given her a strong link to her family's past.

Congratulations for being so brave to go! I'm glad you were well rewarded.
Rinda

I just love it when things happen like that. It makes us realize how, truly it is a small world! I think genealogical research is so much fun. I'm sort of at a dead end myself. I need to get records from Italy, but don't quite know how to go about it and haven't taken the time to find out.

Sometimes our world seems a VERY small place indeed!
Alison xx
PS-I really enjoyed the book and have loaned it to a friend...thereafter I shall put it on my blog as a 'pass the book' and you will be able to watch it on its journey!

This was a wonderful post to read. I am so happy for you that you managed to get there, not have a panic attack and have a lovely time too.

Oh how great is that! You've given her something that I'm sure she'll treasure as she continues her research and well done getting out and not having a panic attack!