It's the first Sunday of the month and that means Story Telling Sunday over at FromHighinTheSky with Sian. This year the theme is "My Precious, where we tell the story of something we have kept as a reminder of a special time.
Why not take a look at her story and then use the links on her page to visit all the other storytellers - but don't do that until after you have read my story. 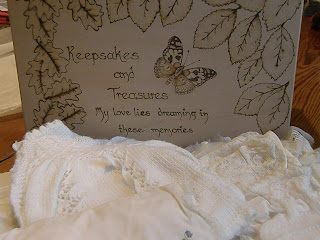 This time the "precious" is a group of baby clothes. A little hand knitted "matinee jacket" (this is a tiny cardigan for a new baby. No I don't know why they were called matinee jackets, this was the 1960s when old names were still used),  a lace covered dress and one tiny hand knitted bootee. My grandmother knitted the jacket and the matching bootees for my first baby. She knitted it in the fabulous new-fangled nylon wool that was now available in the shops. It was supposed to last longer than boring old wool and to stay white. Well it seems to have done both those things, however, it feels dreadful! so stiff and unyeilding and it has a greyish hue. There is no way I would put that anywhere near the delicate new skin of a baby. The complicated pattern shows me how accomplished my beloved Granny was with her knitting needles. I never saw her use a pattern and yet there is a "picot" edge around the neckline and around the top of the little bootee.
The lace covered dress is also made of nylon - oh come on! this was 1965 when my daughter was born. Everything was nylon or crimplene - synthetic was the new everything!
My daughter was baptised in that dress, the plan being that any new baby after her would also be baptised in the dress and I would keep it for grandchildren. This never happened because my daughter was an average size baby but her brothers were bigger, a lot bigger and even as new-borns would not have fitted into the dress. In fact my youngest son was not baptised until he was nearly a year old so it wouldn't have gone around his left leg as he was nine and a half pounds when he was born. By the time the grandchildren came along nylon was A Bad Thing and the dress was fortunately too small and to out of fashion. I keep it because, well because I can. It lay wrapped in old tissue paper in a biscuit tin for thirty years or more until I received my box. The lace has not kept its whiteness and it feels quite brittle, though it will probably outlast me. I wrap it in new, acid-free tissue paper and replace it in my treasure box with all the other stuff.

Something for my children to worry over.
Posted by Ladkyis at 00:27

It is a beautiful outfit. Your Granny must have been some knitter! I love that it is now in your new box :-)

I never my own christening gown but never had my children christened so it never got used again. A beautiful outfit and even more precious as granny made it. Great story.

What beautiful things to have, even if they are never used again.

How beautiful! My children were christened in the 1960's gown I wore and, funny, a few months ago I went looking for it to use as a "Precious" and discovered it wasn't with me, but with my mum. Maybe another month..because I agree: a perfect precious. It makes me think about the "matinee jackets" Grannies were knitting for my two even into the 1990's. I have a box somewhere..

how lovely to have kept them.

I remember all the Nylon and Crimplene of the 60's too. I developed an itchy sore rash everytime I was in contact with it! Love your Gran's knitted stuff though, a perfect precious!

Wow, well done for keeping it and you have described it so well. Very beautiful precious.

Oh the love and skill that went into it shines out. Quakers don't christen so I don't have such things.

Your last comment 'Something for my children to worry over' made me smile :)

Very precious items, thanks for sharing them :-)

It is absolutely beautiful, but the fact that it was made especially for your little one makes it precious. I enjoyed reading all about it today!

Your baby clothes are precious. You are so lucky to have something from your grandmother!!

How lovely to have something knitted by your grandmother, and you told your story so well - I could feel the textures so well from your description, and I remember too - that nylon and crimplene was EVERYTHING wonderful in the mid 60's!
Thank you so much for sharing. J x

Clara and I wore the same Christening gown. Maybe I'll feature that one Sunday this year. Lovely story.
Rinda

How lovely, even if not practical. And the details reflect the love she put into them - precious, indeed.

Fiona@staring at the sea said...

How lovely to have something made by your grandmother for your children. We didn't have christening gowns as children so I made one for my son. It didn't get worn by my daughter as she was a lot older when she was christened. Maybe it will be used again one day as it's pure cotton. I'm very late joining in and catching up this month!