Today was the day. Marked in the diary and everything. Our new stove was to be delivered and fitted. We have spent three years moaning about the "old" stove. How we missed the eye level grill from the stove before, how we didn't like the way the knobs turn on the "wrong" way and go from full on to teeny tiny flame instead of starting at teeny tiny and going up to full flame. We didn't like the colour and we didn't like the stupid glass lid that we never closed. The thing that spurred us into doing something about it was the baking trays. We have two non warping heavy duty expensive baking trays and they wouldn't fit into the "old" stove. They fitted into the stove before the "old" one so we knew we had to get a new stove.
We also spent hours looking at stoves we discussed colour and size and knobs and grills. We looked at range stoves and we examined gas and electric and then we would look at each other and leave the store to find something less stressful to do.
The oven in the "old" stove was awful the top was very hot while the bottom was nearly cold. It all bacame too much at Christmas when Mr M had to cook the dinner. He followed the instructions for the turkey - which came with its own little pop out thermostat - and when he brought it out the top was cooked to perfection but the bottom of the thighs was still raw.
We went to the electrical store and we saw our stove. All white and gleaming with an oven big enough for the baking trays and an eye level grill. We used our Christmas money. We arranged for it to be delivered and fitted and the old one carted away.
They came today. 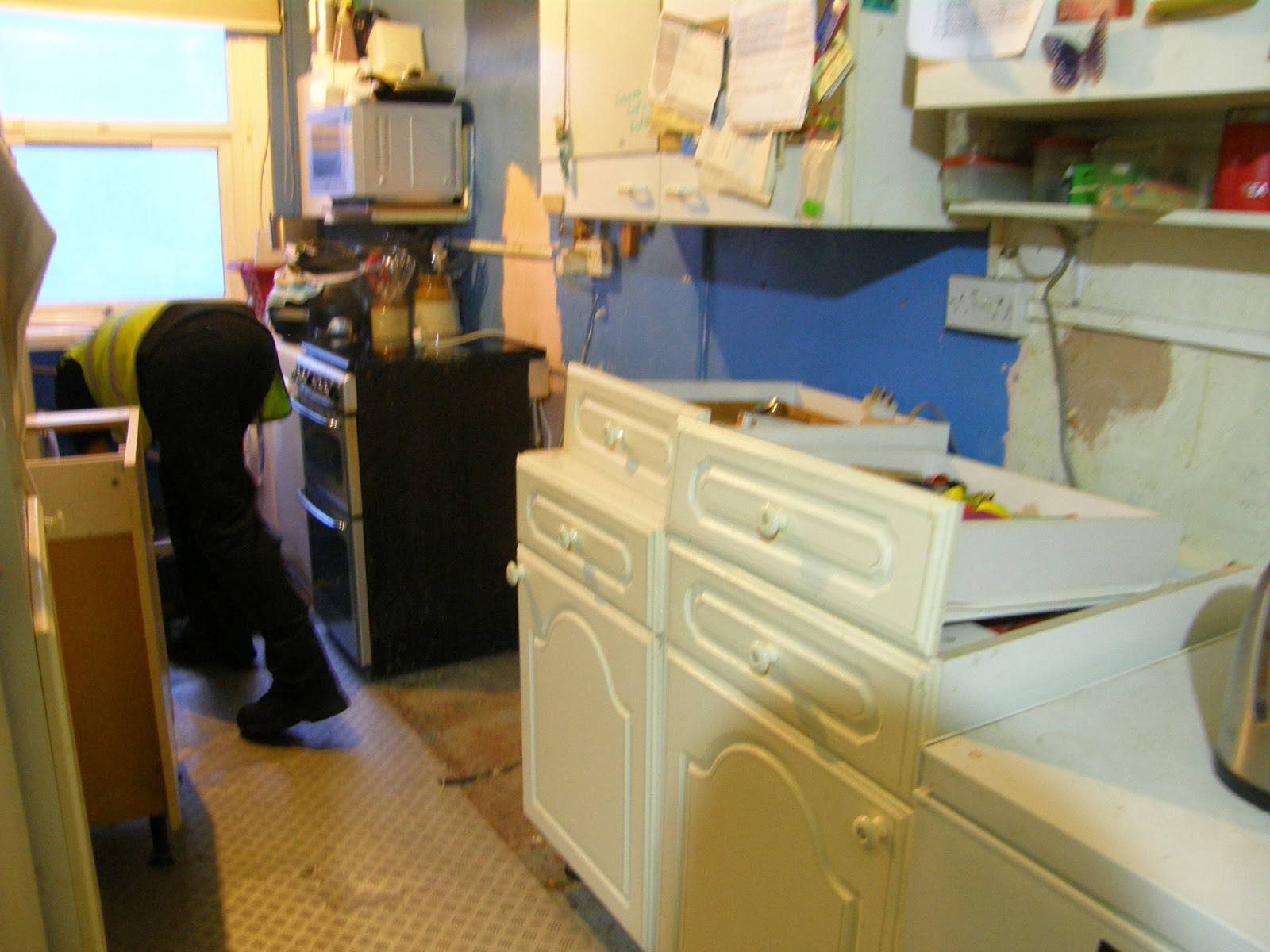 First they had to move one of my cupboards - that's ok, nothing is fixed in my kitchen because I like to be able to move things.
They seemed a bit surprised when I showed them that the worktop wasn't screwed down or anything.

I hadn't seen that section of floor for at least four years so I was surprised at how little dirt had managed to get under there. 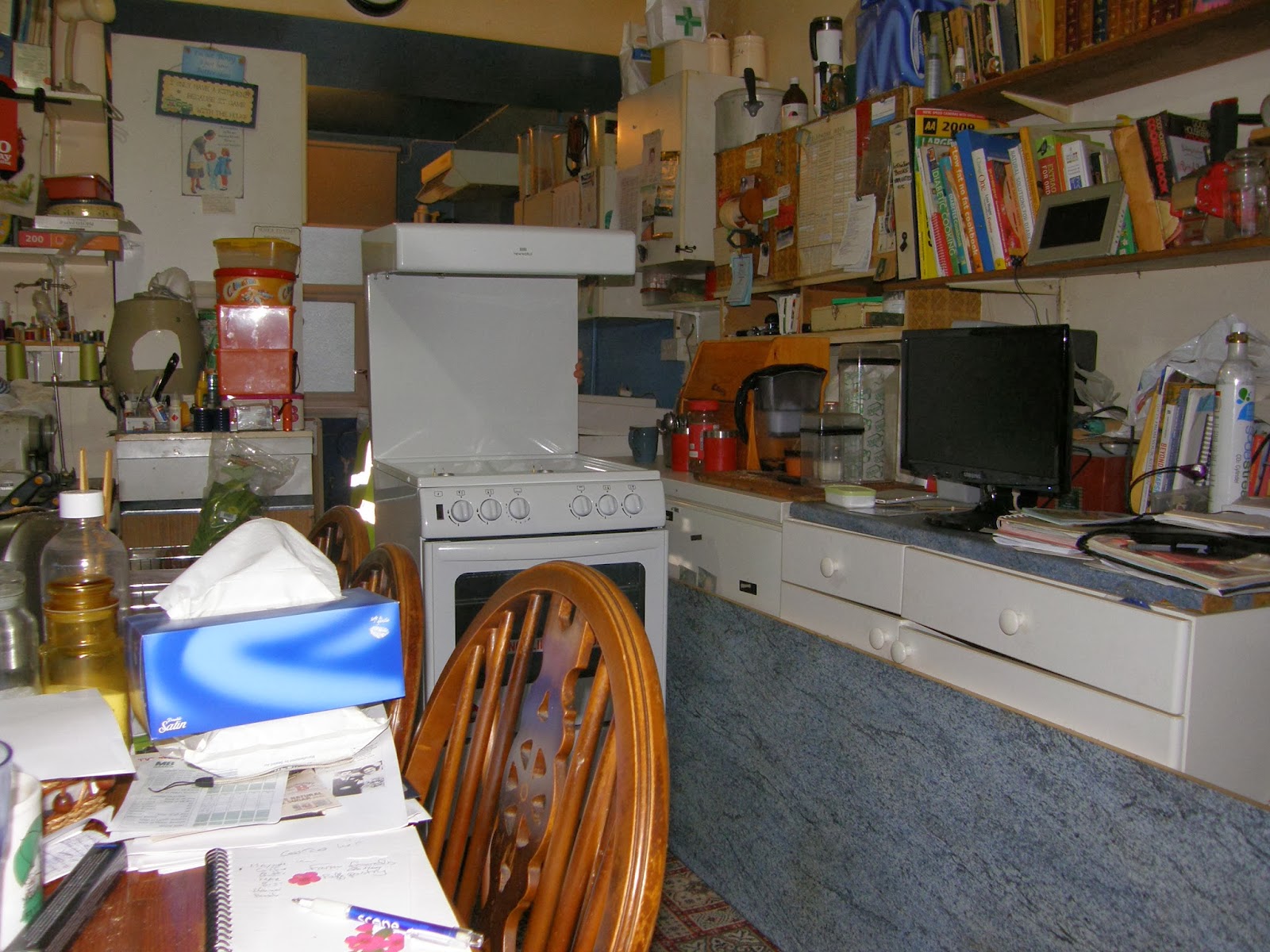 While the one nice man was moving the connection the other one put my stove together. Can you see? an eye level grill. I had to sit in the corner and keep out of the way, oh, look you can see the worktop leaning against the cupboards.

They were really nice and cheerful and soon my new stove was in its proper place and they had put the cupboards back and the worktop on them and levelled everything - that's a first. A stove that is level, such luxury.
I was able to toast a hot cross bun, just to test it you understand, because I won't be cooking dinner on it tonight. Oh no, I have arranged for us to go out tonight for dinner with the Bluefunnels. I did just slide the baking tray into the oven to make sure and they fit just fine!
I will test the temperature range in the oven on Sunday. In the mean time I will continue to stand in my kitchen and admire my new stove.
Posted by Ladkyis at 03:15

I hope it gives you years of culinary satisfaction!

What joy! Enjoy it! I am in need of a new oven, as the thermostat seems to do its own thing ... I just need to convince The Brainy One!

I've never had an eye level grill but my mother in law did and it was very handy :). Wishing you lots of happy days ahead ...

I don't think I know what an eye level grill is. Hopefully you'll post the "after insulation" picture and I can try to figure it out!! I LOVE white! White stoves are getting harder to come by here as everyone seems to go for stainless. I was happy to find my white one a few years ago and love it!