Bit of a Trauma

Bit of a hiatus in the blogiverse for me. You see it was my birthday at the end of September and we had enjoyed a jolly good day and we were looking forward to my daughter's birthday just after. I woke up the day after my birthday and for some reason felt compelled to fire up the face book page. 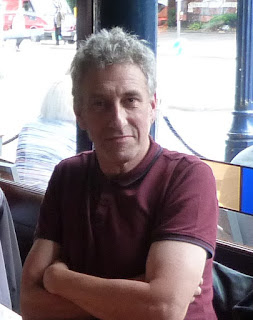 That's when I learned that my cousin Richie had died the night before. His lovely wife could not access any telephone or emails because his phone was thumbprint locked - think about this people - so the only way she could tell his family was to put the announcement on FB and pray that we would see it.
I am ashamed to say I totally freaked out and turned into shrieky cow. Full out panic for at least an hour because his brother lives in Mexico and I didn't want Brother's wife to go on FB and see the announcement before I had a chance to tell him the news. Thank goodness for the six hour time difference. I did manage to tell him before he saw the FB page and so we then had to wait while he made arrangements to fly home earlier than planned He arrived stressed and grieving and I am under instruction to feed him to make him put on weight - I can do that!!! 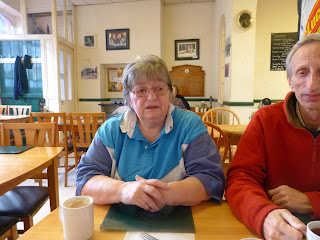 We took him out for the day on Saturday and here we are in The Rest Cafe waiting for breakfast. Do I look tired and fed up? I wasn't, I was actually just feeling hungry. 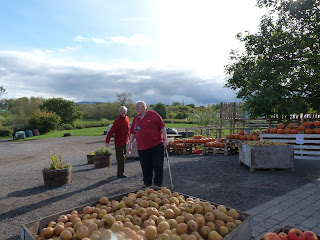 We then went out for a little ride - as we do - and went to Clive's fruit farm. Now is the time to visit there. You can sit in the cafe with ease and then move further and further away from the wood burning stove as you shed layer of clothes. They had Howden Wonder apples which I am advised are perfect for apple butter and I also bought bacon and pork pies and more apples and pears. Cousin Russ was suitably impressed.
Posted by Ladkyis at 11:38

I'm sorry for your loss (and you make a valid point about fingerprint ID ... as a back-up, TBO and I know each other's passcodes as well).

So sorry to hear about your cousin. My thoughts are with you and your family.

So sorry for your family's loss, glad that Cousin Russell is gaining weight. Wookie & I have added one of our fingerprints to the fingerprint ID on each other's phones so we can unlock, although like Ruth we also know the passcodes.