Monday, Mail and Me - ok just me

We went to Liverpool to a funeral. This is me in the only top I have that isn't a T-shirt just about to write in the book of condolence. Never been to a funeral with one of those before - not one I have seen anyway. We met up with cousin Ela and after we had spoken to Dolores (Cousin Richie's wife) and Laura (Cousin Richie's step-daughter) we had a little of the food and then made for the hotel. Ela met us later in Wetherspoons and we had a relaxed meal while talking all the time.

We had decided to stay in Southport over night, because we knew the hotel, and come home the pretty way. Someone forgot to check on road works so we had an interesting detour around Hereford but that's a different story and not really worth telling except that Mr M was shouting at the rain because it had stayed with us all the way. 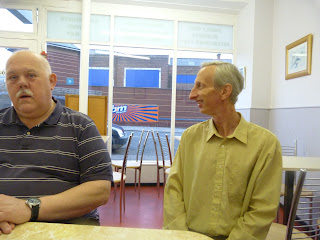 Before we left we had to have breakfast. There are several places in Southport that we have tried and we like Andy's Snack Bar the best. We could check out from the Travelodge, put our bags into the car and walk around the corner for breakfast. Cousin Russell is looking a little better and he tells me he has gained 6 pounds since he got here - Perhaps now he can see why Mr M and I don't lose weight. 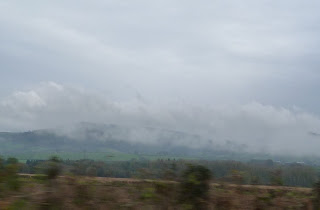 This year I seem to be trying to get the ultimate "Clouds-across-the-mountains" picture. It always looks so photogenic so I click away and then discover that the window was shut and my eyes had ignored the raindrops. -sigh.