Me on Monday- Nothing to see here 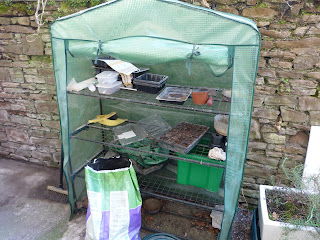 With the help of favourite Son-in-law (he is my only son-in-law) the little greenhouse has been moved down into the garden and the yard swept. The table and chairs was moved up, the cushions brushed off and we sat outside in the chairs that have been stacked up since father-in-law died in 2016 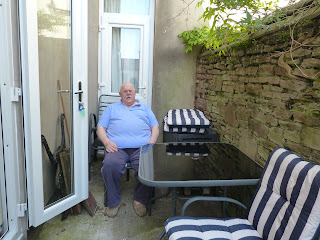 Just look at that pained face! the chair is too narrow and leans back too far so Mr M is squished and looks most uncomfortable. My legs are too short for these chairs so the front edge cuts into the backs of my knees but my bottom doesn't touch the back of the chair. If I lean back I am almost horizontal and flailing around like I am drowning. We managed ten minutes then re-stacked the chairs put the cushions in the box and gave them to youngest son for Helen's (his significant other) garden. We then got S-i-L to carry our good old director's chairs down and we use those when we sit outside. Much more relaxing 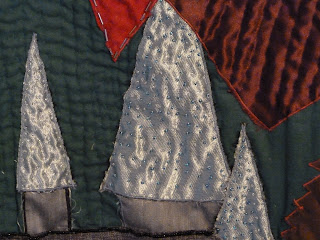 I have completed the Harry Potter quilt but the recipient hasn't seen it yet so you will just have to wait a bit for the full picture. I am taking a little break to make some more tote bags to sell to raise money for the Girl Guide company that DD runs. These pictures are a taster - the turrets of Hogwarts and the Golden Snitch. You have to understand here that I have not read the books and I only watched the first film with Mr M but I was the one getting the snacks and drinks and stuff - oh and cooking dinner. I did this by pictures from the internet and things people told me. These pictures are to show off the beading. I am addicted to beading. 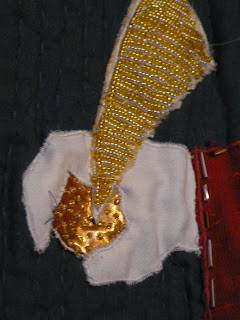 we also went to the garden centre this weekend and bought Tomato plants and runner beans and I might just have taken a look in the "last chance before we chuck them" corner and found some lovely plants. I am gradually getting the garden straight. I have the big blu tub nearly ready for the tomatoes and the runner beans will go in the bed where the tomatoes were last year. I will put the lovely blue flowers in the front of the bed and the Veronica will go under the Wisteria.
So I nice weekend with Mr M taking a couple of days extra and then pulling a muscle in his thigh so he spent most of the time in pain *sigh*. I will be so glad when he retires
Posted by Ladkyis at 04:30

I do understand the lure of the 'last chance' section of the garden centre. It was talked about on Gardeners' Question Time again recently.

I bought a tomato plant this year and it's the only veg I have growing in the new garden. I moved raspberries, and herbs tho'.