Da Gang, and by this I mean Mr M and me and my cousin and his wife who we call The Bluefunnels - I promise I will explain that one day - like to have a day out occasionally. We are all members of the National Trust so we decide the date and the direction and then, depending on whose care we use, we choose the destination (the driver get the choice).
Recently we went west to Dinefwr Castle (pronounced by us as Dinn ay vor because we comes from Newport) This is at Llandeilo so we had to stoke up on breakfast before we went 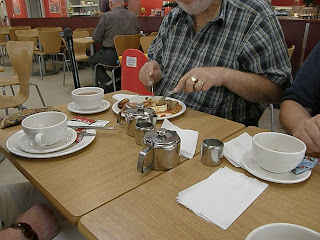 From Breakfast we headed towards Brecon, because just outside Bwlch there is a most important place. The Venison Centre. They have the most stupendous venison sausages and burgers as well as joints of meat and because venison is so lean it is excellent for diets! They also sell fresh vegetables and local produce 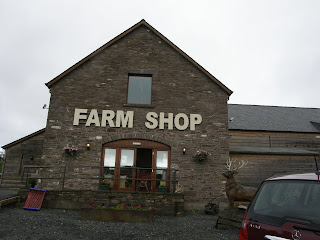 Then we went to Dinefwr. We arrived just as the doors opened and after such a long and arduous journey we had to pause for refreshment. Mr and Mrs Bluefunnel were having a day off from the diet so they had Bara Brith with their cup of tea. Mr M and I were still full of breakfast so we just had our tea and coffee 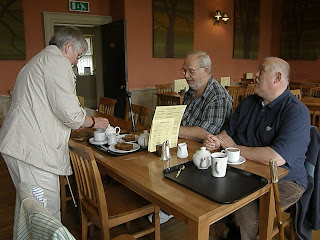 Dinefwr is a fabulous place. It is a "hands on" house so we could open cupboards and touch things - and the children can try on costumes and ha...... ah as you can see the boys were really getting into things. 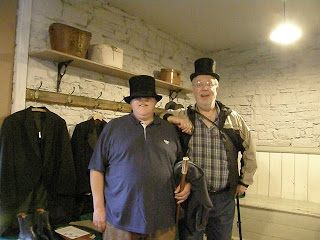 There is so much to see in the house and the staff and volunteers are so helpful and friendly it was a really good day out. Just to top things off there is a picture frame on a pole alongside the path and it is for you to take pictures of each other in front of the house. I didn't get the frame in properly but that's because I was so entranced by the lovely expressions on their faces. Three of the people I love most dearly 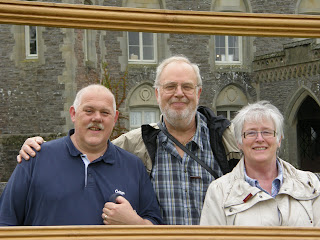 We stopped in a cafe for lunch and then headed for "WHAT" in Cardiff so that Mrs Bluefunnel and I could buy lots of stuff we desperately need. They do crafting stuff - embellies and pens and bling and diecuts and .....and.....and. They have all this as well as boring mundane stuff like garden fairy lights and socks and kitchen utensils and bamboo furniture. All the stuff that comes from China in containers and we lap up. Then we headed to Farm Foods because we had vouchers and the freezer needed topping up so now I can't find anything in the freezer because it is packed full with vegetables.
All in all it was a grand day out. We are going out again at the end of this month, I think we are going to either Laycock Abbey or Snows Hill Manor - so many places so little time.
Posted by Ladkyis at 02:52

A Grand Day Out.