Way back in the 1980s We had lodgers. MY daughter’s boyfriend said I collected lame ducks. Well yes, perhaps I did but that’s all that is wrong with them they just need a bit of time to get onto their own feet and then they can fly away. Mr M rolls his eyes sometimes


My children had grown up and moved out, the boys were in the army in Germany and my daughter was living with her boyfriend in Manchester. We had five bedrooms – we still do – and it seemed a shame to have them empty so when one of the guys we Role played with needed a room to live for a while because he couldn’t live with family any more we said yes, and yes when another of the guys was moving closer to Newport and needed somewhere to........... you get the idea. I did their washing with ours and if they were going to be in at meal times they told me, and I made sure I cooked enough to feed them. This meant that most days they had a good meal and if they went out and had Kebabs on their way home, well serve them right I said.
Sometimes They would be in at odd times – they both worked shifts as did Mr M in those days – and then they would cook for themselves.
We had one of those electric deep fat fryers too – spawn of the devil though it may be. So one evening while I was running a game of Warhammer Role Play Lodger One, we’ll call him John, decided to cook some burgers for himself. Lodger Two, let’s call him David, decided that he would like some too so John was in the kitchen putting burgers under the grill and turning on the chip fryer while David cut some bread and butter and then disappeared to turn on the TV in the sitting room.
David came back a while later just as things were nearly ready in the kitchen. The chips were cooked and the basket had been lifted out of the oil. The burgers were sizzling under the eye-level grill and John was just about to get the plates out of the oven when David pointed at the grill and said
“What’s that funny grey stuff on the burgers?”
“Grey stuff? What the he.................OH SH*T!!!”
From where I was sitting I could see David’s face but I could only see the back of John’s head. I saw John fling something off the top of the eye-level grill and lift the grill pan out of the grill before he turned to David.
David began to laugh, he leaned on the countertop and held his side while he laughed. He sank to the floor and rolled onto his back while he laughed and because he was laughing everyone else began to grin and laugh too – except John who stood, frozen by the cooker with one hand on the grill pan and the other half stretched out towards David, who continued to laugh and now to cry. 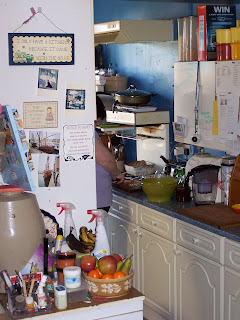 I could see, now what it was that John had flung from the top of the grill so I waited. Gradually David’s laughter subsided and he was able to point at the flung object and look at me and say
“I’ll buy a new one, honestly it was worth it for the laugh”
“No, I’ll replace it,” said John “I put it up there so it’s my fault, I’m SO sorry, I didn’t mean that to happen”
I waited until he had run out of words and said that I accepted the offer. Then and only then did I start to laugh.
I wish I had been able to see his face. David said that the look of stark horror as John realised that the ‘funny grey stuff’ was plastic from the lid of the fryer, melting where it had been put onto the eye-level grill when he lifted the basket out of the oil was a sight he would treasure until he died.
I got a new fryer and John learnt that putting things on top of an eye level grill is so tempting but must never happen
This story has been brought to you through Story-telling Sunday invented by Sian at High in the Sky. why not go and see what other stories have been told?
Posted by Ladkyis at 02:27

LOL! You can do poignant, you can do funny - I love them all! This is another cracking story which really struck a chord with me today. In the 80's, in our first little house, we very often had a lodger or two too. Happy times.

Thank you for joining in again this month. Love it.

We've never had lodgers but I have lived in several shared houses - all sorts of funny things like this happened - great story!

Oops - funny from an outsiders POV though! My DH was always moaning that we used the ceramic hob as a work-surface - have one or two burnt items to prove him right too!

that is just the sort of thing I would do! Glad it didn't cause any serious damage and you could all laugh about it!

What a great story! So glad that your house didn't burn down!!

Made me laugh. Great story. Thanks.