Off to the proof readers my pretty! 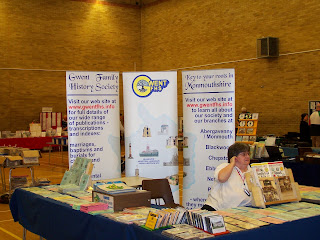 I have just posted out the proof copy of the quarterly Journal of Gwent Family History Society. I am the Editor - again. I was Editor from issue 42 to issue 80, so three journals in the first two years and then four journals a year after that is ten years - good heavens! I didn't think it was that long.
Anyway, I stopped enjoying the experience and I had somehow become the sales officer as well so I let someone else have a go. I guess they thought it was easy because the first person managed one edition. The next person managed three editions and then resigned saying that he couldn't work if I was part of the "Journal Committee" because I was looking over his shoulder and correcting him and telling him what to do.
The correcting bit was because I became a proof reader, and that's what a proof reader is for. The telling him what to do was because I reminded him of the decisions made by the Executive Committee of the Society about the font and the margins and the cover-art. The result was a booklet that listed the details decided by the Exec in 1994.
The Editor's post was then taken as a temporary measure by one of the pillars of the Society. He gently took it back to the quiet, staid publication it had been when I took over. This was fine because it seemed to be what people wanted, well they never wrote in and complained about it so we have to assume that they liked it.
My daughter then took over and brought back a personal touch that had been lost and people wrote in to say how much they enjoyed the journal again! She did the job happily for a year and then she changed her job and suddenly she was going to Northampton for meetings and going to the Welsh Assembly for meetings about the Mental Health act and I stepped in to cover for her. I found that I enjoyed the task again. Writing has always been part of my existence and writing about pesky ancestors to people who are interested is just such a great thing to do.
AJ decided that she couldn't carry on doing the journal, even though she liked it very much, because her job was just too interesting and she would rather give more time to that for the moment.
So here I am three quartes of the way through my second year of my second stint as Editor.  The proof readers will receive the pages from the September edition and by the middle of next week the corrections should be completed and the copy will go to the printers.
I have done the happy dance in the hall, a kind of ritual at this stage, and when the final draft goes to the printer I will do the REALLY happy dance. In the meantime I intend to do something meaningless for half an hour to empty my brain.
Posted by Ladkyis at 04:55