Noisy, a chicken without equal 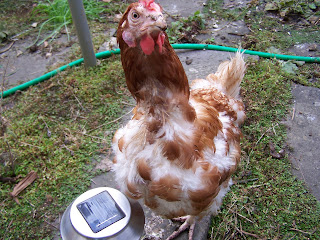 My chicken died today. Noisy was named by Miss M when we collected her from the rescue point two years ago. Noisy is a rescue hen. Hens get one good season when they lay really well then they moult and when they start to lay again there will be fewer eggs. This is the point when they become non commercial and the big egg producers get rid of the old hens to make way fro the new young birds.
The British Hen Welfare Trust has agreements with lots of commercial egg producers that when the time comes for the hens to go they will take as many as they can for the price that the farmer would get from the pet food factory. They come out of the cages into the rescue vehicles and are taken to a collection point where people like me go at the appointed time and collect two or three or twenty. Chickens can live to about five years if they have a quiet life. We reckon that Noisy was about three and a half but she outlived her sisters.
She was bare chested and white faced with stress but still had enough spirit to march out of the hen house just 12 hours after we got her and start scratching at the weeds in our tiny garden.
She protested about everything. If there was a loud noise she yelled to tell me. When she laid an egg she would rush out of the hen house shrieking "An egg! I laid an egg!" Son-in-law arrived home on his motorbike and Noisy would announce him. 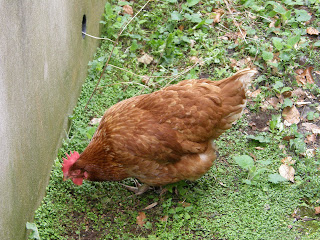 If Blue the cat took a shortcut across the garden she snitched on him. She became the senior chicken very quickly and the others learnt to stay out of the left-hand nestbox I always had one egg in the lefthand one and all the others in the righthand one. She was always close to my feet when I went out to check them and if I looked out of the window she was always looking up at me. Right up to yesterday she was full of life and eating well. This morning she was dead so I suspect her heart just stopped. She died fully feathered with a full crop and her comb and wattles were red and healthy.
Goodbye my girly girl I shall miss you.
Posted by Ladkyis at 11:57