In 2003 Mr M and I decided that we were getting a little too rotund for crawling in and out of a three man tent and we should look at a new one that we could stand up inside. I also quite like the idea od being able to stand up to put my knickers on in the morning instead of lying on a saggy airbed and having to extract handfuls of sleeping bag from the back of my knickers before struggling with the jeans or shorts and crawling out of the tent exhausted before breakfast.
I have searched my computer but now realise that I haven't scanned the pages of my early scrap books so I don't have a picture of our little brown and orange tent to show you. I do have a picture of the tent we bought to replace it 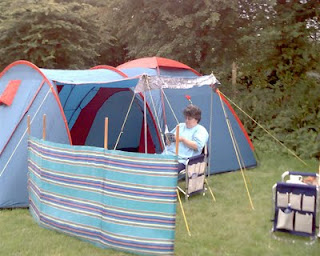 This story has been brought to you through Storytelling Sunday, invented by Sian at High-in-the-sky why not take a look
Posted by Ladkyis at 15:31

Brilliant! And it's serendipity: the caravanners in my story today were on their way to Ilfracombe when it happened!!

The boy grew up, married me and before we could afford a caravan we had a little brown and orange tent which we took round England. One of these days we will get it out again. Then I'll be looking out for you..

Thank you for the story today. You have put me in a holiday mood

Oh dear - although this made me smile, it doesn't make me want to rush out and buy a tent! Gotta love our weather eh?!

I do hope that subsequent camping trips were drier and more relaxing!

Oh I did laugh reading this! I have memories of putting knickers on lying down on an airbed and know exactly what you mean! My parents had a tent which we used for about three years - the best one being in France - after that it was sold on and we reverted back to staying in static caravans, although 8 years ago DH and I bought our own tourer which we finally sold this year. Thank you for sharing such a brilliant story.

your story made me smile so much! I love the reason for buying it and can totally sympathise with the knicker debacle when you are in a little tent! great story.

Oh I remember that well. don't think we were ever completely washed out but certainly very very damp on some occasions.
BTW you are not the only folk who call Ilfracombe Ill-Fracka-bee

Your story had me waiting to see what was next! So well told :) I did not really care for camping as a kid, but that is what we did as a family, can't say that I'll ever do it again though as an adult :) Loved your story!

Loved your story. You had me chuckling away remembering a camping trip I took with my sister & BIL - 3 of us in a teeny little tent. Sounds like your new tent was the only one that stayed dry.

Ha - the joys of British summers! Loved hearing about the pre-erection be a way of avoiding the bad tempers in public - I can identify with that!!! Beautifully told tale!

What a great story! I remember camping in a tent during a rainstorm once, we were on a slight incline and had to get up and dig a trench around the tent so the water coming down the incline would go around it and not puddle up on the high side!

he, he. When does it not rain when you are in a tent ?