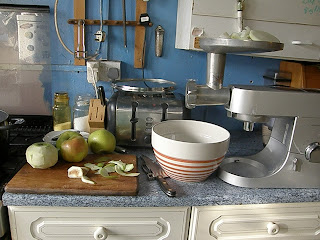 Today I made Apple Chutney. Mr M was given a big bag of cooking apples by one of the drivers that regularly comes to his weighbridge - did I tell you that Mr M works on the weighbridge at the local Electrical Steel works? Well he does and there are several lorry drivers that come into the works regularly to collevt loads of steel. One of them lives in the Forest of Dean and Mr M has known him for several years. 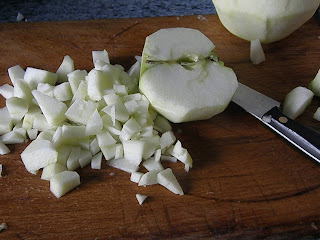 Anyway, he gave us a big bag of cooking apples. More than 3 kilos so I made a rhubarb and apple crumble and decided to use the rest of the apples in a chutney as we were down to our last jar from the previous batch made in 2009. Can I just say here that I don't like chutney. I never put it on my food and the only time I taste it is when I cook it - and I can't even do that without a sense of taste these days.

As I started to peel the apples I suddenly thought that I should take pictures, so I did. I forgot to take pictures when it was cooked though and just bunged it straight into the jars. I will take pictures of the jars when I have finished here and try and get Mr M when he is tasting it. 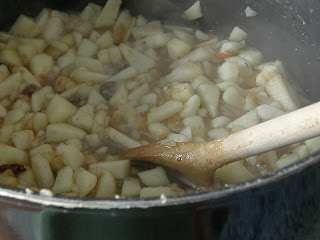 I have just realised the first picture looks a bit weird because you can't clearly see what is in the tray of the mincer. It's the onion. The recipe suggests that mincing the onion allows the flavour to be released more quickly and easily. I am assured that this is the case by people who have tried previous batches.

I got the recipe from www.cottagesmallholder.com and I have adapted it to make Apple and Damson Chutney in the past. That didn't last very long even though I made 8 jars of it. I have used second hand jars that previously held pickled onions or relish or stuff like that. They all have plastic lined lids which is so important with pickles because the vinegar evaporates through paper tops and will eat its way through exposed metal lids. I also made some blueberry muffins, using the last of the frozen blueberries. The juice makes the muffins really blue, and as I use Splenda instead of sugar so that Mr M can eat more than one should he so wish, this makes the muffins a really strange colour because without sugar the cakes don't go such a brown colour. Mr M say he doesn't mind what colour they are as long as he can have one after his dinner as a treat.
I have also had two six year-olds popping in and out all day. Miss M has had a friend to play and she has been doing that showing off thing that we all did when we were six. "This is my Grandma, she has chickens, come and see" and then she marched through the house like she owns it because it is her Grandma's house. She was so thrilled when I pointed to the Blueberry Muffins and off they went quite happily to show Mummy.

Just to add a little icing to the day. I received a book this morning from a fellow bookcrosser. It is shaping up to be a good read too. I'll report more when I finish it.
A good day I feel.
Posted by Ladkyis at 08:54

Apple chutney? Sounds interesting :) My aunt sent me a bag of her home-grown apples so I have plans for pie baking tomorrow, but if I have any left I shall check out that recipe, thank you xx