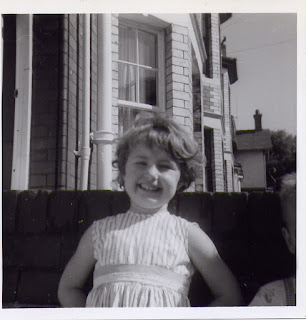 My beautiful daughter moved to Manchester to be with her then boyfriend and within a year had found them a lovely little house in Failsworth. The boyfriend (he never was a keeper even if he is good to know) decided that buying a house was too much like commitment for him so my daughter went ahead on her own and they moved into the house ans settled down. One of the first things she did was paint the window frames and the window sills. These were in need of a new coat of paint so she chose Liverpool red, as you do when you are young. She sanded and rubbed down the frames and sills and primed and undercoated, just as her friend who was a painter and decorator told her. She painted the front gate too. Then she went in and had a shower and settled down to the TV because it was Saturday night and the boyfriend was working at the pub.
The following day she popped down to the corner shop for the papers and on her way back a neighbour from across the road shouted to her "Hey! I want a word with you!"
My daughter was a little apprehensive as the voice didn't sound too friendly. She smiled and waited. The woman crossed the road and said
"You want to be careful painting stuff like that. I opened my curtains this morning - and I'm not saying I was drunk or anything you know? but when I opened them I thought my head had exploded! All that red! you could have caused a stroke!"
Then she grinned and began to laugh before remembering that she had been drinking the night before.
My daughter had made a new friend who was jolly good to her later on.

Sunday passed quietly and on Monday my daughter went to work and was really puzzled because everyone kept laughing and saying how they liked her earrings when she wasn't wearing any. When she got home the boyfriend was there and as she paused to admire her painting handiwork she said "Do you think I should get some nail polish that colour? or should I just use the paint?"
"Beats me," he said "I'm still wondering why you painted your ears."

She rushed to a mirror to discover that she had two perfect dots of paint, one on each ear and no idea how they got there.

Lucky that Liverpool red could be passed off as Manchester red!

You tell such a great tale - and I do like your thinking. A red story for Christmas. Perfect. Merry Christmas to you and yours!

It's always good to match your home decor ;)

I can't believe how much Emm looks like Andrea....she's a little clone. xxxxx