Pick Your Precious - Story Telling Sunday-3  is about celebrating the little things you love: those souvenirs, bits and pieces, things from your past you can't bear to throw out. You know, the special little something you have tucked away in a drawer or up on a shelf? Or the thing you love most in a room? Or the object you would save if you knew you had to leave the country? Your favourite things.Invented by Sian over at FromHighintheSky why not pop over there after you have read my story? 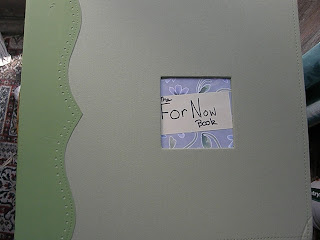 I thought everyone had ForNow things. Boxes, bags, albums and in our case rooms. I thought everyone understood why they were called ForNow places. It appears not. This was brought home to me the other day when I had cause to send Favourite-Son-in-Law upstairs to fetch something for a friend who was visiting.
"It's in Andrea's Room not the ForNow room," I said and off went FSiL to rummage while my friend gave me one of those looks. "What?" I asked.
"What on earth is the ForNow room?" asked my poor deluded friend. "That's where everything goes when it doesn't have a home," I replied "Everyone says 'Oh stick it in there for now' and we have a room full of stuff that has been put 'In There ForNow' so it has to be the ForNow room."

So there you are. But I also have a couple of ForNow boxes and several ForNow Books where I put the pages I have scrapbooked until they can find a permanent home. I said to Mr M this morning "One day I am going to have to take all these pages out of these albums and sort them into their proper places." He nodded and then truned his face slightly to try and stop the grin spreading across it. Too late! I saw it and had to laugh too. 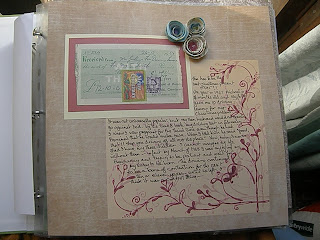 What I really want to tell you about is one of my pages in the ForNow book. It will eventually go into the album about me - the milestones album that I haven't started yet but I have several pages already. This one is the best Christmas present EVER.
This is the receipt for payment from my Dad to Cwmbran School of Motoring for ten driving lessons. The journalling reads:
"This has to be the best Christmas present EVER! The year is 1967 Michael is four months old and my father gave me 10 driving lessons for my Christmas present. It was not universally popular but my then husband would not openly go against my Dad."

I passed my test in freezing fog with ice on the roads and snow frozen into ruts. It was the thing that saved my sanity because I could bundle the children into the car and escape to White Castle or the Forest of Dean where they could run and shout without fear. Finding that receipt in my Dad's box of momentoes was a real blast from the past so it is now secured on its own page in the ForNow book, awaiting transfer..... oneday
Posted by Ladkyis at 01:23

I love this 'for now' idea! We all have places/spaces/drawers like this and mine will now be forever called 'for now' too! Thanks for sharing :)

I love this! Most of my For Now stuff seems to end up in a pile (or two or three) beside the bed. I stack up everything I might need to take another look at and everything I want to reread or enjoy before I go to sleep every night..then when it threatens to topple I take the top two things and try to find somewhere new to put them. So I get it!

I get the driving thing too. TSO was just saying the other day that she thought learning to drive would be too scary and I told her it was essential. The best form of independence and that we would get her through it!

A really lovely story. Thank you

Oh I so get it - and a now I will have a ForNow place! I love it, thank you. Your story is lovely. J x

Fiona@staring at the sea said...

We have a 'For Now' room to, which is supposed to be the Spare Room! You're so right about driving. I was late to learn, at 37, but it has saved my sanity on many occasions!

On another subject. Please could you let me have your address so that I can send your prize. Unless of course your comment wasn't left as an entry into the draw and only as a question. Hopefully you spotted my answer in your own comments.

What a sensible idea - some people of course have an entire For Now house mind which I think may be taking the idea too far.

I had a For Now album but it annoyed me so now I display them for a while and then slide them into the various albums.

I have "for now" piles, but never knew how to name them. Perfect! Great story, and a perfect gift. I can't imagine not having been able to drive when I was raising children.

I have never heard of a "for now" room but love it because it is a phrase we use all the time. That driving lisense is certainly precious. I love the freedom I get from driving.

I had never heard of a 'for now' room either - but I love this idea!

Passporter - sell their folders off cheap with last year's editions. I buy them in bulk and ship them to a friend who strips out all the excess weight Disney bits and mails me just the folders. So worth waiting for :)

I love the idea of "For now" we have a kitchen draw like this & a chair in my craft room I just didn't know what they were called !!

I had never heard of such a concept… Might come in handy to me. My "for now' things are just all over the place. Thanks for sharing! xoxo from France

We have a "for now" drawer in the kitchen, but I'm afraid we've always just referred to it as "the drawer" or "the junk drawer." I like your term much better!
Not really looking forward to starting to teach DD to drive.
Rinda

Your receipt alone made for the perfect precious today. The fact that you've already scrapbooked it and told the story is an added bonus!!

this post really made me smile, I think we all have places like that and we are always the ones who have to sort them!

Love the 'for now' idea. We save things for 'Ron' as in for lateron! I love the journalling from your page - that was clearly so very precious to you.

I have a 'for now' garage, cupboard, room, and shed! I really do need to get some sorting done LOL I love the idea of the place having a name. My mom always called it a Roundtuit - as in "I'll get around to it"!

I love that you found the receipt for those driving lessons and that you put them to good use.

I have a 'for now' drawer, album, box and cupboard :) I love the layout and the story of your dad getting you driving lessons x

So glad I stopped by today! I love the story of independence and escape - driving does provide that outlet. Around here, it seems that my craft room is, by default, the "for now" room because my hubby dumps anything and everything he doesn't know what to do with (even if it DOES have a proper home) in there!

I am in the process of clearing the 'for now' room in our house, as it's the spare room and I have house guests arriving next Friday!!
Alison xx

LOL! We have a "for now" room too! What a lovely keep sake in your book too.