Me on Monday - still chuckling 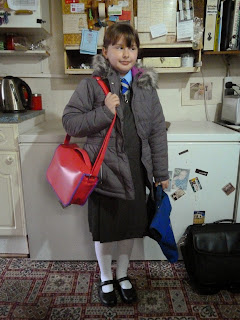 It's been a let's-go-for-lunch, let's-ask-the-Bluefunnels, looking for special zero birthday presents, declaring war on the slugs, getting dizzy with the perfume, listening to Miss Boo describe the new car that Mummy and Daddy are buying kind of weekend.

On Saturday we suddenly decided that lunch out would be good. We rang the Admiral to see if he was feeling better and discovered that they were in Devon on a long planned weekend visit. He is much better and beginning to believe that the "funny turn" was caused by a change of medication. Lady B is already fed-up with the passenger seat driving she has been subjected to after the doctor forebade him to drive for the next four weeks. If he survives I suspect she will be able to market her own brand of gag and blindfold.

We went to Jo's in Whitchurch and then on up towards Ross where we headed along the Hereford road to this amazing place where they sell all sorts of recycled and salvages stuff. A lot of it is highly priced pretentious shi  stuff but some of it is cute and one or two pieces would have come home with me but I have nowhere to put them. We were looking for something different for two special zero birthdays, you know the ones that have a five in front of a zero? yeah, well my beautiful daughter reaches that milestone this year and my ex daughter-in-law gets there in July. Both of them should have something to mark the special day and finding it will be the summer task - along with the Scavenger Hunt, but that's a whole other post.

The nasty slugs have eaten nearly all the leaves from my new clematis so I have to get slug pellets but I have birds that come in my garden and I don't want to poison them or the cats - sigh - it's knowing what to do that takes the time. In the meantime I stand by my washing line and get dizzy from the heady perfume of the Wisteria - heavenly

The best bit of the weekend was when Miss Boo came back from Gang Show rehearsals and showed us the pictures of the car that she and Mummy had chosen. She described the colour and the shape and then said "Mummy opened the boot and showed me. It's huge. I told her you could easily get a body in there."

Now I know she likes a good murder mystery but I did briefly wonder who she thought Mummy would be putting into the boot. I didn't ask.

I'm still chuckling too...and wondering if she has a body in mind on which to experiment! Xx

Excellent! Good to know she is planning ahead lol

I always get a hoot out of Miss Boo! She is so cute. I think she must be around the same age as my little Elizabeth. About those slugs---try circling your plants with old coffee grounds and ground egg shells. At least it's natural and will enrich the soil. Slugs don't like the texture and won't cross the line.

Miss Boo does say some funny things! I also don't want to harm birds so I put slug pellets under a broken pot but I do have to pick up the slugs afterwards!

What a fun and exciting weekend! The wisteria is magnificent. But spending time with dear friends is the best!