Me on Monday - tired 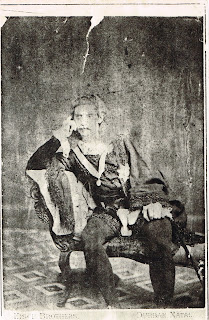 It's been a funny weekend but I have learnt some interesting things. The World Wide Webby has come up trumps again. This is a picture of my great Grandfather, Charles Guilfoyle-Seymour, This picture was taken by Kisch Brothers, Durban, Natal. We - the descendants of CGS know he was an actor, we have loads of reviews about his performances. We also have a copy of an advertisement where he sends Christmas greetings to "My friends in the diamond fields." What we didn't really know was why he was in Natal. Then I found a newspaper report of a travelling company run by Captain Disney Roebuck, that took a party of actors to the diamond fields to bring a little culture to the mines. The actors were contracted for a year and travelled by Ox-cart. I found a report of my great Grandmother going there and taking the Captain to court for withholding her wages. This, we realised was where they met. When I brought the picture to the attention of my Cousin Travis - he is an actor/writer/teacher who lives in Holywood! (yes, I know it makes me all excited and proud and he has loads of stories... but it's not Travis we are talking about here) - he said the pose is "classic Hamlet" and that several other very famous actors used just that for Hamlet. It makes sense because we know that the Captain took Shakespeare to the diamond fields it says so on Wikipedia. So that was new information for the family to hear in the next newsletter. 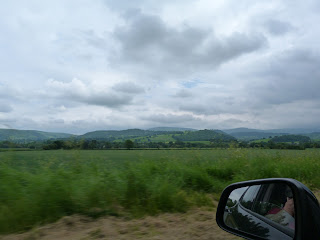 While all this was going on in the ether Mr M and I went out for a bit of lunch and a little ride. Where to go for lunch ... well we stopped at the new services on the A449 at Raglan. There used to be a real cafe/restaurant there but that services closed years ago. Now they have rebuilt it and there is a Greggs and a coffee shop and a Subway. We bought some baguettes and some water and got back in the car. "We don't want to sit here looking through the windows do we?" asked Mr M. I shrugged, because I really just wanted to eat.
We drove up the road a ways and stopped in a lay-by and ate our food with a perfect view into the gents toilets. I didn't comment on the view because I was too busy eating and not laughing.
Then we drove on past Monmouth and into England where we took a left at Hereford and drove through the countryside. We eventually turned left and headed back into Wales and we came into the Wye Valley. Not that pretentious gorge between Monmouth and Chepstow that Turner and Wordworth made such a tourist spot. No this is the Wye Valley around Hay-on-Wye and Breconshire. Wide and light and extraordinarily green and, in my opinion, far more beautiful than a gorge with such thick trees all down the side of the road that you can't see the view anywhere.
Did I learn anything this weekend? yes. I learned that you have to keep on putting stuff in front of family so that their memories are triggered and they say things like "Did I tell you that...." and you say "no, oh do tell" and they then give you fascinating glimpses into their lives and you are enriched by the history. I learned once again just how lucky I am to live where I do. Perhaps I am biased but coming home from anywhere always makes me see this precious area of South East Wales for the jewel it is. So much diversity in such a small place.

What an interesting ancestor you have, and how lucky to have found all that on the world wide web.

That's fascinating! If you were ever looking for a subject for a book, you've got one right there..

Have a good week!