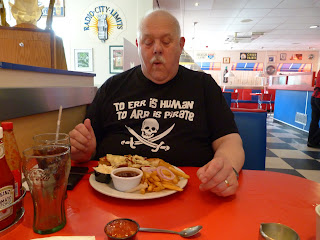 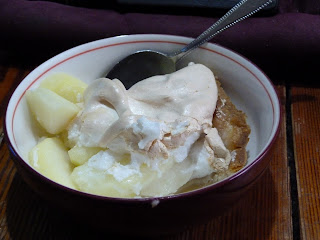 So. Father's Day eh? We had a little trip out on Saturday. We took Nan's clock to Leominster, as you do, and then did lunch at the OK Diner as a father's day treat. As you can see Mr M is struggling to know where to start on his Three Cheese melt sandwich. He managed it eventually although he left most of the fries and half the bun.

The Clock? well, in Leominster is the Barometer and clock shop and they are really good. Nan's clock was without a key. During the clearance of Father-in-law's house everyone had been "keeping an eye" for a key to fit Nan's clock. It wasn't found, although we did discover about seven keys that have no keyhole or lock to fit them. I had the idea on Friday that we could take the clock to the Barometer shop and perhaps they would have a key, or they would tell us how to get one. I rang them to make sure they would be open and so we put the clock into a shopping bag and set it on the back seat of the car. It is a chiming clock so there was the occasional ting, slightly muffled by the bag, just to remind us that we were transporting a valuable cargo.

Worth about £30 in the present market, apparently. The key cost us ten pounds and we had a quick lesson in how to regulate this particular clock. If we wanted to get it in running order, all clean and working well it would be about £200 plus VAT. Hmmm that's pretty expensive sentimental reasons and they would be the only reasons for spending that amount of money because even after cleaning and servicing it would still only be worth about £50. We don't mind. It belonged to Mr M's grandmother and we actually heard it chime and it is really nice. One day we'll get it done.

Sunday was Father's Day and also it was the anniversary of the day 35 years ago when I became Mrs M. (original post) it was also the 71st anniversary of when my parents married in 1945. Having been to Leominster on Saturday we didn't feel like going out again so we spent the day happily playing on the computers, reading and, for me at least, snoozing in front of the TV.

For our anniversary dinner we had home made chicken and ham pie followed by apple meringue pudding.

My Thanks to Sian at FromHighInTheSky for inventing this meme and keeping me writing
Posted by Ladkyis at 00:46

I love chiming clocks - the ticking and chimes make for a friendly house.

Happy Anniversary! Chicken and lemon meringue sounds like a fine way to celebrate

Oh some of the old clocks make the best chimes.

Many congratulations on your anniversary. And may the clock continue to chime for you both for many years to come.

I'm late getting round this week. Belated Anniversary wishes to you and your Mr. I can relate to the key troubles, we ended up with a bowl of odd keys when clearing my hubby's aunt's house. And it is disconcerting to not know where they all fit, and even more so to need one for a particular lock and it not be there.