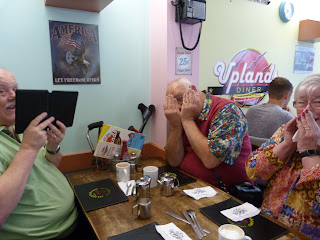 It started with a phone call on Friday evening. "What are you doing tomorrow?" asked the Lord Admiral, "Not a lot" I replied. Lady B's voice came down the line "You are now, we'll pick you up at 8 o'clock."

The sky was grey and threatening rain but that didn't matter. 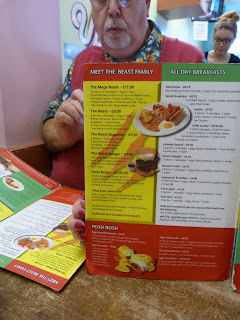 "We are going to Swansea," said the Admiral as he put the postcode into the satnav. "We have never really done Swansea before, we keep saying we'll go and then putting it off so we thought if we asked you to come we would have to go."

The rain began as we passed Cardiff and by the time we had reached our first destination and driven around the block three times to find a parking space it was coming down in stair-rods! We got soaked crossing the road but the Uplands Diner was welcoming and their breakfast looked and tasted delicious. I pick up my camera and they all hide their faces - fed up with the fearless photographer snapping them. 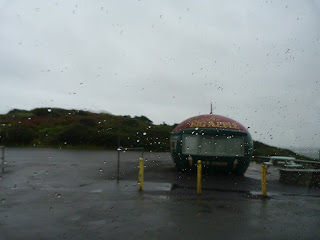 We then moved on to the Cathedral of St Joseph which was really lovely. The Parish Priest, Father Dominic, greeted us together with two sisters from the same order as Mother Teresa. They were putting up pictures in the entrance to the cathedral and explained that on Sunday Mother Teresa would be made a saint and as St Joseph's Cathedral was the last place she visited when she came to the UK they would be celebrating a Mass for the event on Monday. Lady B and I agreed that we thought it was very quick for her to be made a saint and we wondered about what miracles had happened.

We then went to the indoor market, apparently the best and biggest indoor market in the country. Not sure if that country is the UK or just Wales and we feel that Newport Market is actually bigger, but whose counting eh? 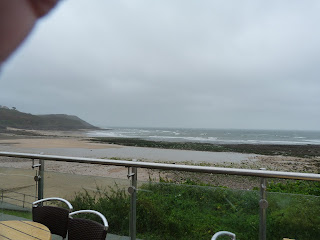 Then we thought about lunch. We headed for The Mumbles but didn't stop. Admiral B remembered that the last time he had been to Port Eynon was when he went on holiday with his cousin when he was seven (this was me, and was the holiday when I was sick in his wellington boot, a whole other story) so we headed there, pausing at a rather posh restaurant in Langland Bay but as we hadn't made a reservation we couldn't stay. The view from their veranda was quite nice - if it hadn't been closed down by the mist. 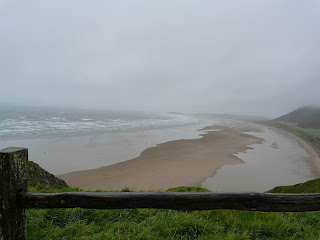 We went to Port Eynon, it was shut. No really, the cafe and everything was shut tight and most of the car-park was closed off too so we carried on and headed for Rhossili. I had never been there before, always going to the other end of the bay but we found the Bay cafe and had a delicious Pannini lunch before the gentlemen went back to the car and Lady B and I fought against the wind and rain to get to the National Trust shop. It had to be done if only because they stamp NT passports there and I needed to get mine stamped. I took one quick picture of the beautiful beach before scurrying back to the car.

We were back home by 5pm and snuggled warmly into our chairs, drinking a warm and welcoming cuppa.

There are always moments in our days out when something happens that really makes us all laugh. Usually I forget to write them down but Lady B gave me a new notebook for scoring the legs game so I used it to write down the daft things.
Talking about the traffic and the tourists (remembering that Lord Admiral is a little hard of hearing)
"Too many grockles about these days" says Mr M
"Too many Brothels?" asks Lord Admiral, looking quickly around us
"Ha! that got your interest!" said her Ladyship and we all dissolved into laughter

Once again a day with lots of laughter, lots of conversation and quite a few memories of good times.

I always enjoy your stories :). And the views of the sands and the bay in the grey are very atmospheric - I remember views off the west coast of Ireland like this.

Beautiful pictures of places new to me :)

I learned this weekend that Mother Teresa had spent some time living here in the 70's. I hadn't realised that before.

Wishing you a great week..maybe with another trip to look forward to in there somewhere?

Your days out always sound delightful. Great snaps too. Have a great week.