Memos, Mail and Me - first edition 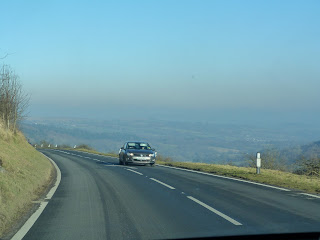 January was mostly shut. Even the view above was shut the day Mr M took me for a little drive and we decided to come home the pretty way. The camera was poised and as we came around the bend I clicked and then realised that the normal view where a person could see all the way to Brecon was covered in mist - shut! As was January.

A niggling chest infection kept me low for most of the month. I so wanted to do things and take part in things but by the time I had looked at my emails all I could do was snuggle into my bettermaker quilt and watch mindless TV. Eventually I decided not to fight it and just didn't do anything much.

Now it is February and I am feeling a little better. This weekend Started on Thursday with a flare of the inflammation in my wrist that I haven't had for ten years! I gave in straight away, took strong painkillers and wrapped it in warm fleece. By Saturday it was fine but I had a tummy upset that kept me close to the bathroom all day. Do you know what is worse than someone saying "I had that" and giving you too much information? It's someone saying "There's a bug going around".
I don't give a flying wossname if there's a bug going around! I have an upset tummy and feel like a wrung out dishcloth, who cares if anyone else has it? I have it and it sucks!
The day was made better by the arrival of a parcel from Amazon. four DVDs! for me! I spent some of my Christmas money.
I long ago decided that the cost of going to the cinema was so much and I don't like going on my own so two tickets are £20+ and we can buy the DVD for just over £10 when it first comes out.
While I was feeling a little better I made a list of all the recent films that I wanted to see and I went on Amazon and ordered them. Four DVDs for just over £20.
We sat and watched one on Sunday - I say we watched but really Mr M sat with me and snored gently while I watched Florence Foster Jenkins. Meryl Streep is always good and Hugh grant has matured nicely - Thelma Barlow is in there too and John Sessions. Made me cry a little.

My Thanks to Sian at FromHighInTheSky for inventing this meme and keeping me interested in writing
Posted by Ladkyis at 03:17

Belated Happy New Year. I am sorry you have been unwell and hope that you are now well on the way to being fit again.

Glad to read you are feeling better.
We really enjoyed that movie over the Holidays.
Greetings from Chicago~

I'm so sorry you've been feeling so rotten. But I'm delighted to see you popping up today :) I hope this week has another good movie or two in it.

That sounds like a miserable five weeks :(. Hoping you are beginning to pull round a bit now. Tucked up in the warm with DVDs sounds nice. Though we did get to the cinema very recently to see LaLa Land and I thoroughly recommend it.

Not a good start to the year for you health wise, I hope things will improve. Staying in with a DVD sounds like a good idea.

Oh dear, so sorry to hear you were down for most of January. I'd be for spoiling myself with DVD's too. Hope you are completely up to snuff soon. We quite enjoyed Florence Foster Jenkins, at the theatre - we do mostly matinees, as the ticket prices have gotten ridiculous.