Mondays, Mail and Me: Parcel from 'Merica

Did we do any thing new? Yes we did, we signed a couple of slates. The Jewel in the crown of my home town is Tredegar House. It was built by the Morgan family - parts of it are mediaeval but the front of it is much later, 17th and 18th century. It used by the American Army as billets for officers during WW2 and was sold after the last Lord Tredegar died without an heir and was a Catholic school through my childhood. The Convent is was linked to had a new, state of the art school built alongside it in the 1960s and the old house was threatened with demolition. The Town Council bought it - despite much opposition - and began the laborious process of restoration. My father was a wrought iron worker and he won the contract to restore the railings and side gates. He was so proud of this and made sure that his grandchildren knew just how important it was for him.
In the early years of this century the National Trust took a 50 year lease on the house. The council had reached the bottom of the money pit and were getting pretty desperate. This action has done several things for the house. The number of visitors has increased dramatically because it is listed in the NT guidebook. The NT has begun a long programme of restoration and conservation and people locally are more involved than ever before.
This year the NT have wrapped the whole house in scaffolding and covered that in plastic sheeting because the roof is to be stripped and replaced. They have put in place a scheme where people can pay a fee - £20 - and they can sign a slate before it goes up onto the roof. I mentioned it to Mr M and so on Saturday we went down there and performed the deed. We had two slates. We dedicated one to our parents and I added a note telling about my Dad and his restoration of the railings. The other we dedicated to us, the children and grandchildren and great grandchildren. 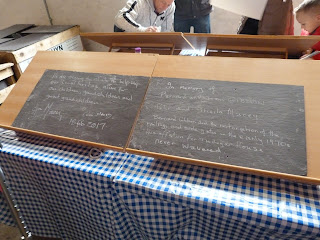 Did I have any mail worth talking about oooooooooh yes!!! A parcel came from 'Merica. I have a cousin ... actually I have over 30 cousins but I have one cousin who lives in Hollywood. Yes the real movie capital. He lives within sight of the Hollywood sign, just around the corner from where the Oscars are held and he is an actor, writer, artist and teacher but mostly he is my cousin. Recently he took a nostalgic trip to New Orleans and as he knows I just love to receive postcards from anywhere he sent me a parcel. It contained strings of beads and postcards. He explained that the strings of beads are called throws by the inhabitants of New Orleans, the strings are thrown from balconies and from the floats in the carnival and - those of a nervouse dispositon should stop reading now and start again after the picture - if you catch a "throw" you are supposed to expose parts of your anatomy. Females should bare their breasts and males their ... junk I think is the latest euphemism. I was excused this task because I am not in New Orleans - and the weather is too cold. 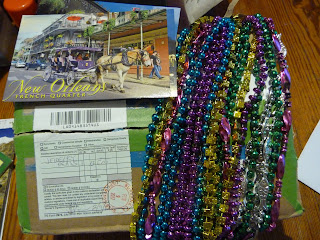 I was so thrilled to receive my parcel. I have told everyone about it and I am pretty darned sure that the beads will be very useful when Miss Boo gets involved in the next show with the Pantomime Society.
One thing that kind of shocked me was the fact that the value of the beads etc was put on the customs form as $6 but the postage cost $22.50. I think that showed me just how much my beloved cousin cares for me...... and even though we have never met face to face he really knows me quite well

my thanks to Sian at FromHighInTheSky for inventing this meme and keeping me coming back for more
Posted by Ladkyis at 03:33

What a thoroughly excellent parcel!

I love what you did with the slate too. The railing deserve to have their story told.

Oh, I love the idea of the slates - glad you took photos too. Fun packages are always wonderful to receive - I'm continually astonished about how much things cost to ship across the pond.

Since my daughter went to Tulane in NOLA, we have boxes and boxes of beads! They are a lot of fun to decorate with too!

What a great idea about the slates.
Those beads are certainly a great thing to share for Sian's Monday Mail theme!