Monday, Mail and Me - teaching the Satnav

We took the satnav out for a training exercise. Mr M is convinced that if he keeps saying no and ignoring her she will learn that we don't like narrow lanes with grass growing in the middle. I have my doubts.
We are taking a special couple out with us next Saturday and we needed to see which way Ms Satnav would take us given the chance. It was mostly narrow lanes with grass. At one point she took us off the direct route onto lanes only to bring us back onto the same road! I think he is going to have to reduce her options a little more 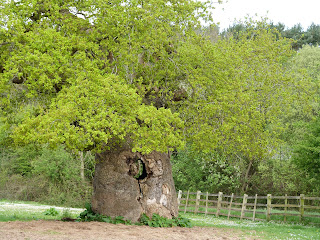 We started the day by going to The Parson's Nose in Dingestow (note to self: the church is dedicated to St Dingat NOT St Dingbat). On the way into the village Mr M said "OOh, you must get a picture of that on the way out". and on the way out he actually stopped! Yes, I was surprised too. We bought sausage and bacon rolls and some other delicious comestibles and because the rolls were warm they soon filled the car with the aroma of sausagey goodness. 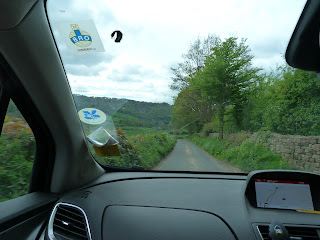 This is the sort of lane that Ms Satnav loves - actually this one isn't too bad, it's the ones with high banks and hedges so you feel hemmed in 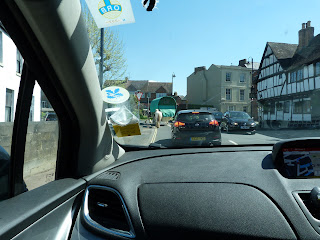 we arrived here behind a driver called Richard Cranium, at least that's what Mr M called him and just as he was about to start a bit of a rant I mentioned that you don't often see a Gypsy wagon being pushed by the horse. Mr M suggested that it could be Irish, but my Irish ancestry refused to laugh
OH OH can you see the dirty splatt on the windscreen? A Seagull in North Wales did that, bloomin' birds.
Mail this week. A letter from the Doctor's surgery telling me to make an appointment for my diabetic review and the DVDs of the first two series of Hinterland because I simply have to understand and seeing all the episodes again will help ... yes it will, I know it will, it has to help.

My thanks to Sian for inventing this meme and keeping me writing
Posted by Ladkyis at 03:14

this made me smile, my husband never trusts our satnav and we usually end up going miles out of our way.

Thanks for the advice about the pea shingle, I hadn't considered the local cats, so will have to rethink my options.

My satnav kept taking me down narrow winding lanes until I stopped it selecting the fastest route. Hope you manage to teach yours and let it know who's the boss!

We don't own a sat nav and I'm hoping to keep it that way, though I wish you all the very best training yours! TNSSO tells me that they're changing the Driving Test so that everyone has to learn how to use one.

Wishing you all the best with the week ahead. Enjoy Hinterland.

Wookie ignores our sat nav too - he says it is the only lady he's allowed to ignore.

TownMonkey lives where there are lots of tall banked lanes with hedges, feels like driving underwater, but she likes it.

I am never convinced that SATNAVS actually get you anywhere in the most direct way!!...have avoided Hinterland so far...must take a look at it! Xx