Monday, Mail and Me - Friends make everything brighter

We went out for a little ride and took some special People with us. Yeah, yeah I hear you say. So what, you've done that before. The thing is the lovely lady in these pictures in only now getting back to reasonable health after a ten year battle to wean her body from its addiction to topical steroid creams. You know the sort that doctors prescribe for just about any skin condition? well they darn near killed her and the withdrawal caused adrenal failure and goodness knows what else. We thought we would lose her but she is a fighter and after several years being bedridden and blind she is now rebuilding her life and getting back to her art. She is always a joy to be with and now her health is improving slowly we can go out and do stuff! 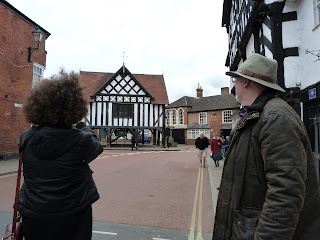 This is Newent. There used to be a lovely little museum in "the Shambles" but now it is no longer a museum and the shops are real shops that sell stuff. We wanted to show them the museum but we settled for looking at the shops. I might have bought some yarn. 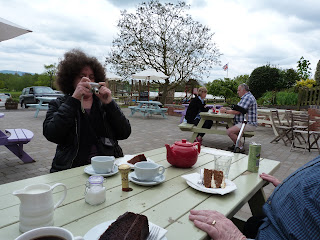 On to Clive's Fruit Farm where we had tea, coffee and cake before I popped into the shop and collected the Ham Hocks from the butcher and also a few other bits and pieces - flour and pork scratchings and a scotch egg, a minted lamb pie and a big pasty.
We then detoured to Leominster and introduced H and P to the OK Diner ( no you don't want to go there, it's not your thing... no really) 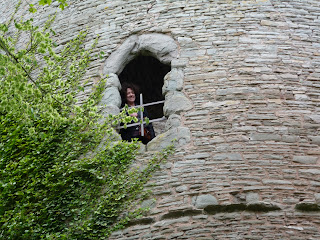 Then it was a simple thing to go home the Welsh way and to pause to take in a castle - Bronnllys Castle near Talgarth. H is doing her Rapunzel impression but she said we might have to wait a while for her hair to grow a bit more. She photographed a jackdaw's nest up there on a window ledge in the tower so we told Cadw incase they want to stop people disturbing the birds 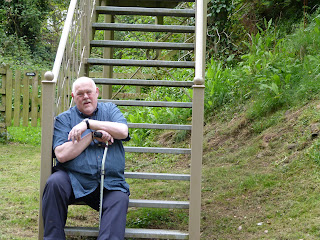 Mr M had aching knees by this time so we stayed at the bottom of the stairs while the more intrepid adventurers went on up.
It was a delightful day out and we laughed a lot.

Mail? nope nothing to see there.

My thanks to Sian for inventing this Meme and keeping me writing
Posted by Ladkyis at 09:59

Shocking story, that is. I knew steroids by mouth could do very bad things, but I had no idea the creams were such a menace too. How good to hear that she is up and about and being encouraged to adventure thanks to your excellent company!

Wishing you a good week ahead.

I have heard that steroid cream can do your skin damage, but had no idea to what extent they could damage your entire well being...so glad your friend is on the mend...sounds like a lovely day out! x