Monday, Mail and Me - dispatched but not received 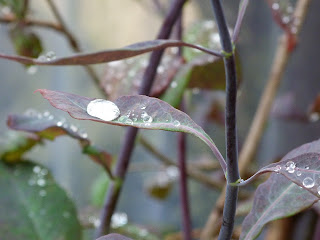 It rained! The garden was so grateful and when I opened the window to take a picture of the raindrop on the honeysuckle I swear I could hear the ground sucking in the moisture. I am quite proud of my picture because I was standing still when I took it - so unusual. 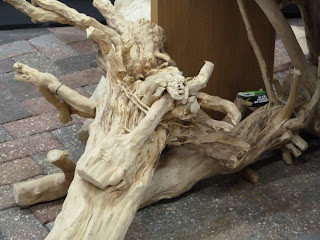 We went out to a garden centre on Saturday. Now keep in mind that we live in south-east Wales and we were, I thought, just popping out to the Wyevale down the road. We went to Cadbury Garden Centre in Congresbury. That's over 'The Bridge' in England. Mr M had a plan you see, because he had a voucher (or a vulture as YS said when he was six) for 30% off at any Hungry Horse pub. 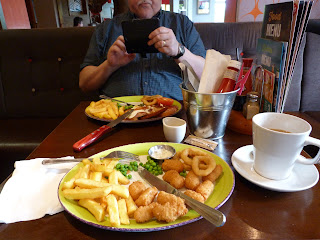 So we went to Cadbury, bought a trowel and some new gloves as the old ones had gone mouldy during the winter, and some pretty flowers and two cucumber plants for me to kill try and nurture. Then we went to The Super Mare for an early lunch. I had the scampi and he had the giant gammon. I didn't eat the fries. I seem to have trained my stomach to accept smaller portions these days so I leave the fries until last and as soon as I feel full I stop. 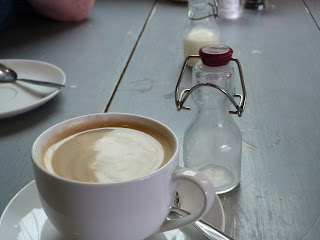 We then came home via Gloucester ... actually we didn't stop in Gloucester we carried on past and then stopped in another garden centre where they do a fantastic cup of coffee and, so Mr M says, a lovely cup of tea. We like the way they bring the milk to the table in little stoppered bottles. Excellent when it is summertime and the flies get into everything. 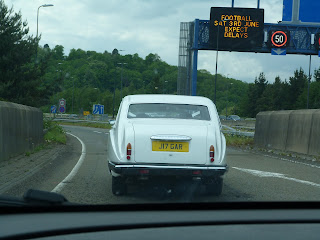 As we were on the homeward stretch we saw this car and it didn't seem to have a driver. I wasn't able to get a clear view but there was no sign of a head on the driver's side.
When we managed to pass him a little further on it was a tiny little man who was peering through the gap in the steering wheel with his eyes just above the dashboard. I am so glad we don't want a wedding car.

Dispatched but not received? That's my yarn order and the trousis order. I bought some sock yarn for a scarf pattern that I like it was dispatched on Tuesday but hasn't arrived. Curses on the Royal Mail!
I also ordered some lightweight trousers for the summer and they haven't arrived either. Fingers crossed for this week

My thanks to Sian for keeping me writing
Posted by Ladkyis at 02:54

lol! My kids say that's what I look like when I drive.

I'm glad to hear that I'm not the only one who suffers from mouldy gardening gloves. Hope you get some good use out of the new ones!

I am always having to replace gardening gloves because I leave them outside and I am terrified spiders(or worse!) have clambered in whilst I wasn' t looking! Xx

I am 'vertically challenged' - that's why I love driving my mini - it's just the right size for me.
I must admit I'm always a bit dubious about putting gardening gloves on when they've been in the shed over winter - you never know what may have made its home in there! There was once an incident with a wasp in the finger of a glove, I'll leave the rest to your imagination :-(

We're off to Chelsea tomorrow and one of the things on TownMonkey's list is 'buying new gloves'. Mine don't go mouldy as I lose them instead. Hope the nurturing works and nothing dies...