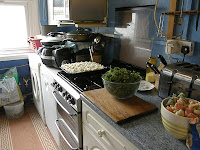 Today I decided to make fish pie. We don't have it often because I always think it is going to be more trouble to make than it is. I found a recipe ages ago and my rule is that the first time I make it I do it exactly how it says in the instructions. This tells me what it should turn out like. The second time I usually fiddle a bit and make notes on the recipe sheet. Sometimes we decide that we never want to eat it again EVER after the first tasting but usually I get a second go. The fish pie was delicious the first time but could stand a bit of tweaking.

I realised as I gathered the ingredients that the recipe is for 4 to 6 portions so I texted my cousin and said "fish pie 2nite 6pm" He answered quickly to confirm they would be with us so I could happily tweak the recipe and everything was ready to go by 4.30pm. We had curly Kale, carrots broccoli and cauliflower with the pie and I sprinkled a little grated cheese over the top before I popped it into the oven for the final cooking.

My problem is that as I still don't have my sense of taste back properly I had to wait for Mr M to come home to taste the pie. He was a bit late so it was back in the oven and it was too late. The verdict was 3 Wows, four excellents, and three "compliments to the chef".

I have to admit that trying to lose weight AND keeping Mr M on a sugar free diet has honed my cooking skills and my 20 years in the catering business has certainly been put to the test over the last year. I feel so much happier when I cook things because I know what is in them. The amount of 'hidden' sugar that manufacturers put into food these days. Almost everything that is low fat has extra sugar and salt to compensate for the lack of flavour. Mr M gets his sugars by eating fruit so I try to ensure that everything else is sugar free. This means that we have to use sweeteners and we come up against the Aspartame problem. So we try to use fresh foods because that is easier.

After dinner we got talking about crafting because my cousin has a business that sells the machines and tools to do wood carving and pyrography and was exhibiting at the NEC last weekend (I was able to get in free because of this) we were discussing my cuttlebug and various other things and he was asking me about laser cut wooden embellishments and stuff like that - let's just say that I have quite a selection now.

Then suddenly it was getting late and they had to go home and I have to go to bed because I have to take Little Miss to school in the morning.

I LOVE fish pie, but my husband isn't a fish lover at all which means I can only sneak it on the menu about once a year. This one with the grated cheese on the top sounds delicious.

I'd have come round at short notice for fish pie, too! Just let me and Sian know next time it's on the menu, OK? ;-)