Last week we purchased two new chickens. I would have liked them to be rescue hens but when we looked at the logistics of collecting rescue hens from either Builth Wells, Swansea or Bristol it made more sense financially to drive just ten miles and buy two new point of lay pullets than to drive for an hour to Swansea or bristol or two hours to Builth Wells and then give a donation which would be the equivalent of buying the hens.
I thought long and hard about it but decided that next time I will get rescue girls.
Here is Noisy examining the camera closely for food potential. 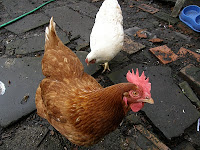 Anyhoooo, we have two young girls now to keep company with Noisy. I bought one from each pen so that all three would be a stranger to the others giving them a level start to life.
One is an Amber Link
the other is a Rhode Island cross.
Amber is very bright although still a little nervy. She is very bossy and immediately began 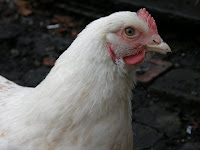 pecking Noisy and trying to show her who is boss. Noisy just side stepped out of the way and gave her "the Look".

Chicken Licken got her name because the first time she experienced the Food-from-the-window she ran away because she thought the sky was falling in. 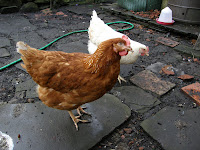 I should explain. Our house is built on a hill so the front door is level with the pavement but the ground falls away so there is a cellar under the back of the house and the garden ( that's what we call the 18' x 15' area at the bottom of the steps) is another level down so when I open the kitchen window I am 15 feet above them and when I throw out the crusts from Miss Em's sandwich Noisy rushes around grabbing them as fast as she can while the other two stood looking at her as if she was mad. They soon realised that tasty stuff fell from the sky every time the window opened and now they are all like greyhounds across the garden every time we open the window. Mr M cooks noodles especially for them ( the man who doesn't like pets eh?) and I hide my smiles when I hear him telling Noisy to "look behind you, bird brain".
They soon settled in - every book you read gives you a different way of adding new birds to a coop. I followed my grandmother's way. I waited until their bedtime and put them all into the house together and shut the doors. They settled down to sleep and when they woke up they thought they had always been together and I have had no trouble at all.
To my delight on Thursday one of them laid their first egg. it is very light brown in colour so could have been either of them. I suspect Amber will produce cream coloured eggs but can't be sure. anyway it was a typical first egg. Quite small, half the size of the one that Noisy produced the day before. I said thank you for laying an egg when I collected it, as I always do.
I had heard a great commotion in the garden which was why I went down to look. Noisy always yells when she lays an egg, as though she has never seen one before but for some reason who ever produced the new egg must have set the other two off because they were all very excited and yelling.
I like to think they were all calling me and saying "Look! Look! an egg! look we found an egg! an egg! in the nest box! we went it and sat down and when we stood up THERE IT WAS! AN EGG! Look! an egg!"
I scattered some corn and they soon forgot to yell. I could watch them for hours they are fascinating and all the local cats hate them and stay out of my garden because the girls attack cats.
Posted by Ladkyis at 16:38

lol! How lovely to meet your girls :-) And their names are perfect! xx