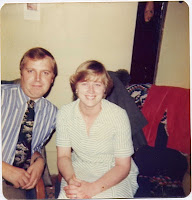 I have just read Sian' Blog and it has reminded me of a Zoo story but this time it didn't happen to me, it happened to my cousin and his wife.
This was way back in the early 70s when CB radio was THE thing to have. My cuz and some friends formed what became a CBers club and they went on several outings and day trips. One of these trips took them to a zoo. I have no idea which one and it really doesn't matter.
Most of the club members were young or had young children and a day out was really great fun. My cuz has a way with children and they flock to him, I suppose it's because he is still just a big kid himself. Anyway, they went to the zoo and most of the children were clustered around my cuz and his wife as they walked around looking at the animals
"Oh, look in there at the monkeys" says my cuz as he stops and fiddles with his camera. His wife who is two steps behind him turns to look at the monkeys as do the children. Wife suddenly realises that two of the monkeys are, well, engaging in some monkey business, just as one of the little girls asks "Why is that monkey bumping the other monkey's back?"
"I've no idea," says wife, "perhaps he has a tummy ache. Oh look at the Zebras aren't they beau---" her voice stops as she realises that two of the Zebras are indulging in horse-play. She grabs the hands of the smallest children and with a hiss of her husband's name to get his attention she marches off saying "Let's go and see some snakes!"
My cuz has missed all the action and doesn't understand why he and the children are trotting through the zoo to go and look at snakes when he knows his wife cannot stand them.
The children are suitably thrilled by the snakes and can shriek at each other with glee while Wife explained to Cuz just what had been going on.
She said that it seemed as though every animal in the zoo suddenly decided that the moment was right for a bit of rumpy-pumpy and they all waited for her and the children to stand and look.
When we travelled on the Severn valley railway many years later we gazed out of the window and realised we were passing the safari park. "I wonder if they have monkeys with tummy ache in there" said my cousin and the rest of the travellers looked on in amazement as we laughed for three miles!
Posted by Ladkyis at 12:19

Oh, that's brilliant! It's a cracking good story and I'm glad you posted it - it has put a smile on my face this morning :)

lol!! Love this story! And the ending of your post is just perfect, you have such a way with words xx